Like some other Central Oregonians in a changing economy, Topo, age 50, Thiel and Patti—two sisters in their mid-30s—along with Jackson, Herbie, CJ and Emma, are facing eviction this spring. In this case, though, the prospective evictees are chimpanzees. 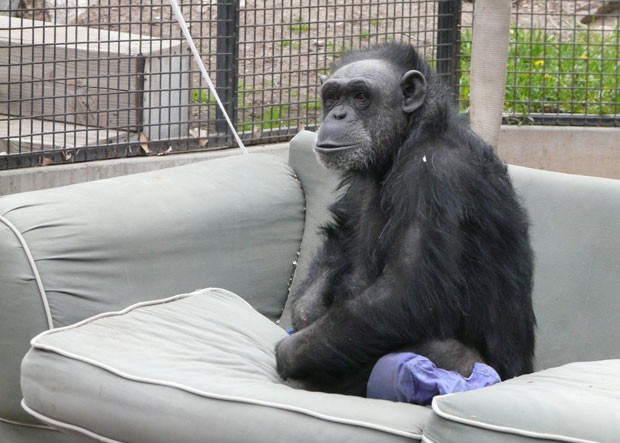 Since Topo was transported to Chimps Inc., a facility in Tumalo, in 1995, the primate community has been growing.

Lesley Day, former president of Chimps Inc. and the owner of the property where Chimps Inc. is located, revoked the lease for Chimps, Inc. after a dispute between the two parties. The board of directors for the nonprofit responded by arranging for the chimps to move to a research lab, Ape Cognition and Conservation Initiative, located in Iowa. According to reports, the board's decision was based on safety violations and the nonprofit's loss of accreditation by the Global Federation of Animal Sanctuaries.

Twenty-five-year Chimps Inc. volunteer Karen Tepner says board members told her last summer that her services were no longer needed, for what she says is for no apparent reason. Tepner says earlier in the summer, two caregivers refused to sign a release form, which led to their dismissal. Allegedly, in retaliation, the dismissed caretakers documented and reported incidents of wrongdoing at Chimps Inc., prompting the Oregon Occupational Safety and Health Administration and other agencies to get involved.

Day said, "Last year, Chimps Inc. barred me from the sanctuary and sought to place all blame on me for safety citations issued by Oregon OSHA. While some of the citations were directed to the manner in which I personally interacted with the chimpanzees, the bulk of the alleged violations were directed to matters that were the primary responsibility of the then-executive director of the sanctuary. I [feel] scapegoated."

Since Day is the owner of the property where the sanctuary is located, she stepped down as president and elected not to renew Chimps Inc.'s lease.

Sally Pfeifer, a former affiliate of Chimps Inc., notes, "I have read the OSHA report and it is clear that Chimps Inc. board and management sought to place the blame on Lesley for safety citations by Oregon OSHA. While some of the comments in the report mention Lesley, the bulk of the alleged safety violations were directed to matters that were the primary responsibility of the management of the sanctuary, which was not run by Lesley."

Current Chimps Inc. board member Mike Waller did not respond to our request for an interview, but told KTVZ-TV that OSHA found, "several safety and labor violations due to Ms. Day's negligence." As for the chimps' prospective move to Iowa, he said, "They will not be subjected to any invasive or medical research. The research... is behavioral and includes puzzles and tasks that are enriching to the chimps, and they will enjoy that."

Former volunteer Tepner worries about the stress that would be placed on the chimps, should they be shipped to Iowa—a journey that she says would have to include dart guns, tranquilizers and more than 1,000 miles.

"Animals at that age cannot handle a journey like that, for that long in a cage," Tepner said.

In an effort to keep the chimps in Central Oregon, volunteers recently formed a new nonprofit, Freedom for Great Apes. Pfeifer, a driving force behind the new group, says they're prepared to take over care of the chimps. They've created a petition to support their efforts, gathering about 4,000 signatures thus far. Day, meanwhile, has signed a long-term lease agreement with Freedom for Great Apes.

"After working with Ms. Day we've learned that... she lost confidence and trust in the current Chimps Inc. board—not that she wanted to evict the chimpanzees from her property. It is evident that the relationship between Ms. Day and Chimps Inc. is damaged, but the most important thing is to prioritize the chimpanzees and do what is in their best interest," Pfeifer says.

While the issue gets sorted out, Day aims to dispel any rumors that she holds control over the new nonprofit.

"Freedom for Great Apes is an independent nonprofit. Any suggestion that it is subject to my control is false and an insult to the members of the board," Day said.

When asked why she thought the board of Chimps Inc. would rather send the chimps to Iowa than sign over guardianship to Freedom for the Great Apes, Pfeifer relays, "We have not really received a clear answer to this. The Board of Freedom for Great Apes is comprised of experts in chimpanzee behavior, OSHA safety regulations, nonprofit management and primate sanctuary operations and management, and we have simply provided a sound option for assuming the management and care of the chimpanzees so they could remain in their home. It is an unprecedented move for chimpanzees living in a sanctuary to be unnecessarily uprooted and relocated to a research facility of any kind."

The petition aimed at keeping the chimps in Central Oregon can be found on the change.org website by searching "Chimps Inc."

Editor's note: A quote starting with "Animals at that age," was incorrectly attributed to another volunteer, and has been corrected to be attributed to Karen Tepner.

A native Oregonian, K.M. Collins is a geologist-gone-writer. Covering everything outdoors and a spectrum of journalism, she's a jack of all whitewater sports and her favorite beat is anything river related. Don't blow her cover as a freshwater mermaid amongst humans.
Read More about K.M. Collins