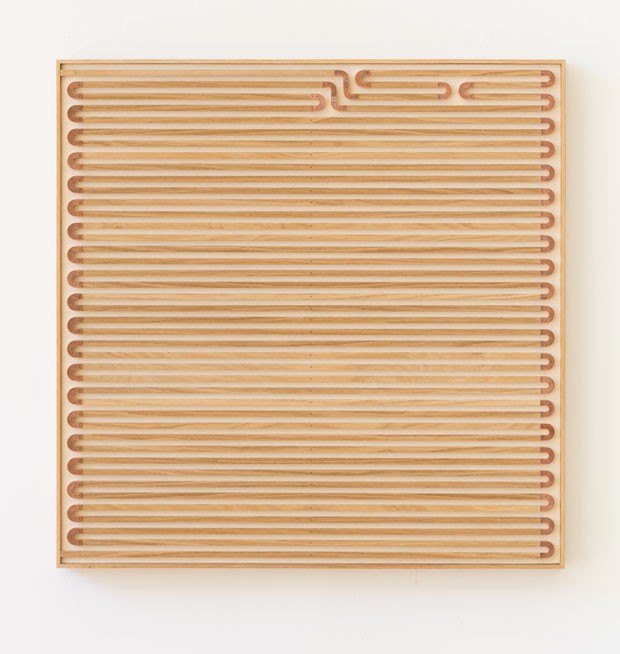 Often the question for the artists is, "What do you do?"—meaning the viewer needs the world wrapped up in a tight little bow labeled watercolor, painter, sculptor, or something equally vague and understanding. Christian Brown is not one of those artists. His high level of craftsmanship paired with his delicate and intellectual whimsy brings a viewer in and then makes them stay there.

Next month, Brown will open his second exhibition in Bend in the last two years, his previous at the Central Oregon Community College Pence Pinckney Gallery. This show, titled "The Hidden Hypotenuse," is an eclectic mix of copper masks, tools, tapestry, drawings, prints and more in his series of "Unpainted Paintings," in which he uses wood and metal to create elaborate designs he planned to pour paint into. But then he decided to not put the paint into them. "It was like I needed to get out of my own way to allow this work to be beautiful as it was," he says. Now he's gone further with the formal nature of the pieces, once again exploring the visual structure of language through the abstractness of design and pattern—a lot of which was influenced by the use of old letterpress materials in the original pieces.

Brown, who moved to Bend five years ago from New York City, seems grateful and inspired by the drastic change of landscape and pace of life, with it allowing him to explore his own work, to settle into the inspirations that come when they do and following them to see where they go. This can be daunting for an artist who can put hours into their work only to have the final piece not be what they'd intended. For Brown, this is what is wonderful about this process—or as he simply puts it, "The Mystery is worth it." It's also the idea behind the show's title; perhaps the route taken was not the shortest, but it was the one that made it worth it.