The City Manager proposed a resolution to fine short-term rentals for operating in a pandemic, but Bend City Council didn't even vote on it

April 16, 2020
7 comments
Right now, the City of Bend is an island surrounded by Deschutes County, in the eyes of vacation-rental rules anyway.

Deschutes County Commissioners passed an order April 6 to fine renters and owners $1,000 per day if they book a short-term rental reservation for recreational purposes. The County still permits essential STR stays for health, safety or employment. Eric King, Bend City manager, issued a “strong advisory temporarily discouraging recreation or vacation travel here during this COVID-19 emergency,” according to a press release from the City on March 27.

But there’s no way to enforce it. It's just an advisory.

The Source reported on the “send them a letter” method of code enforcement the City has reserved for the vacation rental industry in Bend. Hundreds of vacation rental owners operate without a license in the City of Bend, and brazenly advertise their properties on Airbnb and VRBO.

But not all vacation rental owners are rule breakers. Many pay their taxes and dutifully register their property with the City year after year. It's the scofflaws and opportunists who the people in Bend might be worried about during a worldwide pandemic and statewide lockdown.


Recreation communities, where people come in... some of the statistics that I read today... [these towns] experience rates of infection that are four times higher than other rural counties. -Mayor Sally Russell tweet this

Wednesday night at the Bend City Council meeting, Eric King presented an updated short-term rental resolution, which would allow the City to actually enforce King's “strong advisory,” banning recreational travel in Bend. It was written to maintain consistency with the County’s order, but made a violation a civil infraction with a $750 fine per day.

Over the past few weeks, the City received a number of calls from people who live in Bend who were concerned that people from out of town were coming to Bend to shelter in place, instead of remaining in their home communities, according to City Attorney Mary Winters.

Winters emphasized that now (if the Council didn't not pass the resolution) when people call the City to complain that some STR owners aren’t following the rules, City staff will just have to tell the callers there’s no way to enforce King’s prior order. 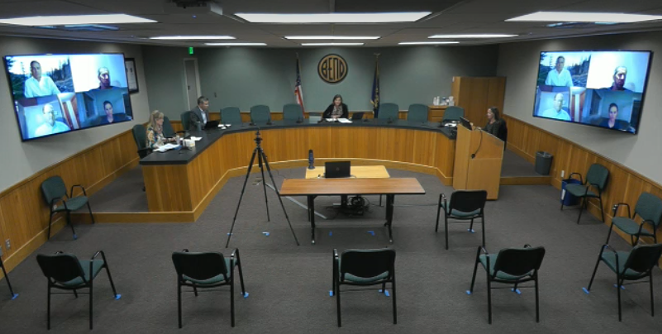 Mayor Sally Russell told other City Council members that there are temporary restrictions on vacation rentals all over the county, and Hood River, Cannon Beach and Tillamook have all instituted enforcement mechanisms in response to the pandemic.

“I think the conversation that we need to have today is about risk and economic recovery and how those are interlinked,” Russell said before directing her colleagues to share “high level” perspectives about the issue.

“This would indicate that City is being consistent with the country, other counties across the state,” said City Councilor Barb Campbell. “I don’t want there to be any signal that we’re are the one place where they can come and enjoy the COVID crisis… here in beautiful Bend, Oregon.”

“My goal is protecting the best we can the people who call Bend home,” said Councilor Gena Goodman-Campbell. “We are closed; I don’t think that is completely clear across the board.”

But Russell, Campbell and Goodman-Campbell—who were all leaning in favor of passing the resolution with the fines during the meeting—had no support from other the four other Councilors.

Councilors Bruce Abernethy, Bill Moseley, Justin Livingston and Chris Piper all argued against regulations, because they said they appeared to only target short-term rentals, and that there’s already 'voluntary compliance' in the tourism community.

“Is this a solution looking for a problem?,” Livingston asked. “Occupancy rates are really low; a lot of hotels and short-term rentals are doing the right thing.”

Moseley said that if we only listen to the “health voice,” society risks a future Great Depression.

“Recreation communities, where people come in... some of the statistics that I read today... [these towns] experience rates of infection that are four times higher than other rural counties," countered Russell. “The community would go from no COVID cases to 90 very quickly. This is very infectious and very impactful. This also affects the capacity in the hospital system, medical care system, public safety, all service providers... We are now an island in the middle of Deschutes County.”

When Russell asked for someone to make a motion to pass the resolution, no one said anything, instead beginning debating their positions again. The City Council spent nearly an hour in total debating the addition of an enforcement mechanism for short-term rentals and never voted on it.

“What I’d like to suggest at this time is we simply move forward to item number 10 on our agenda,” Russell said. And so they did.