City Says Mirror Pond Should be a Parks Project

It's been a hot topic since 2002—and even before: When to dredge the silt and buildup from Mirror Pond, and who pays for it.

During the May 15 City Council meeting, Mayor Sally Russell asked the other councilors a series of questions, aiming at finding consensus on where the Council stood on Mirror Pond and whether the City should contribute funding for the proposed Mirror Pond dredging project. The pond, formed by the impoundment that is Newport Dam, hasn't been dredged for nearly 35 years, causing silt buildup that turns into smelly mud flats in the summer time when river flows are low. 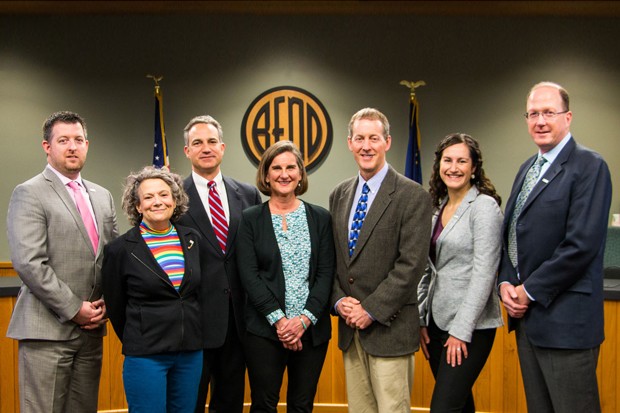 Last week, councilors expressed interest in funding the entire Mirror Pond project—not just dredging, but improving public spaces—but also suggested putting stipulations on the money. Councilor Justin Livingston said the City should cap funding at $3 million over a 10-year period, or 50 percent of the dredging, whichever was less. Others, including Councilors Bill Moseley and Barb Campbell, said Bend Park and Recreation should take over the management of the project. Moseley said the City should have no further role in funding or managing the pond.

"I want out," Moseley said.

If the City contributes $3 million, it still leaves a significant funding gap for the dredging project, estimated to cost about $6.5 million. About $320,000 in private pledges has been raised by the Celebrate Bend Foundation, a group dedicated to preserving the pond. When the pond was last dredged in 1984, a federal grant contributed 48 percent of the cost. Councilor Bruce Abernethy said Wednesday federal dollars were not expected this time around.

Campbell identified four stakeholders for the pond: Pacific Power, BPRD, the City and private contributors. She said the $300,000 was the highest amount she was willing to spend on the project out of City funds.

Russell said Mirror Pond is a "heritage project for Bend and the centerpiece of our community," asserting that Mirror Pond is an amenity that visitors and tourists use. Russell said she felt using the discretionary portion of the Transient Room Tax the City receives from hotel and short-term rental taxes could be used to fund the project.

"It is the responsibility of the Council to move it forward," Russell said.

If the river was found to be navigable, the state would own the land under the pond, Goodman-Campbell said—which could cause another wrinkle in a discussion that's been going on for nearly two decades.

City Manager Eric King said he would take the Council's proposal to BPRD's board. If the park board is interested in the proposal, the groups would form an intergovernmental agreement between both bodies, and there could be a chance a project could be approved by both the board and the Council by the end of the current fiscal year, on June 30.