There's something special about the big-band era. Hearing every instrument fire off sounds to execute the perfect song has an unmatched energy, one you might not find today if you're not looking for it. However, if you look north to Seattle, you'll find a seven-piece gem called The Dip. 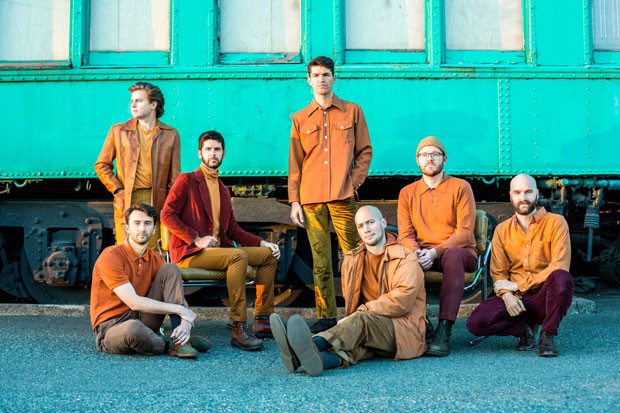 Formed at the University of Washington, the boys of The Dip were studying jazz and decided to try their hand at house parties. Now, I'm not sure about your college experience, but a jazz band at a house party definitely isn't the norm.

"I think people were just so taken aback that there were seven people playing in a room, and there were all these horns," says drummer Jarred Katz. "Your typical house party is like a four-piece rock band or DJ, but I think people were like, 'Woah, is that a bari sax?' Just by the sheer number and style of music we were playing, I think people kind of gravitated towards that."

Currently The Dip is gearing up for its five-week tour, the longest in the band's history—and quite possibly the most tight-squeezed situation they'll ever encounter. Seven guys, instruments, merch and personal belongings, all in one van.

"Five weeks is definitely long, man. I feel like three weeks is doable, but that fourth week you're like, 'I'm down to be home now,'" says Katz. "There's seven of us in the band so the van is gonna be very cramped. We're looking forward to it, though."

The tour comes following the February release of the band's new album, "The Dip Delivers." Spanning 10 tracks, it starts off on an extreme high note with "Sure Don't Miss You." You'll find yourself transported to some dancefloor in the '60s as the grit in Tom Eddy's voice—who also wrote the song—takes you on a journey, remembering better days. Things get slowed down later with "Adeline," perhaps one of the smoothest and swooniest songs I've heard in a while.

"We're really stoked on how that one ["Sure Don't Miss You"] turned out. It's really fun to play live and it's super easy to sing along to. We're really lucky to have that song out there," says Katz.

Dabbling in the R&B, soul and blues realm as The Dip does, it's a challenge to make something that sounds fresh, but the band succeeds at making songs that feel current while paying respect to what came before.

"For us, it's even more important to make songs that feel like our songs, you know?" continues Katz. "Sometimes you'll hear something and go, 'That just sounds like that, but like 30 years later.' How can you make your own contribution without just ripping something off? We have to keep pushing ourselves to make sure we can find our own lane."