Cleaning up the Caves 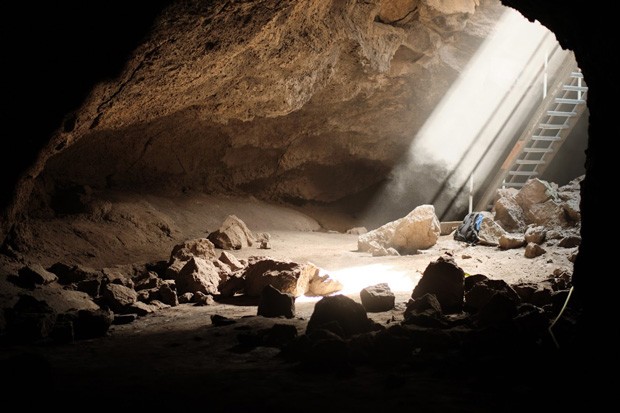 Sections of the cave, from floor to ceiling, have been tagged by vandals with obscenities, images and names over the years throughout the cave's 1,860-foot length. A large "NINJA" in black letters greeted visitors just inside the cave entrance.

"I've been crawling through these caves since I was a teenager, so I have a pretty good idea of what's going on out there," said Neil Marchington, chairman of the Central Oregon caves graffiti project. "I remember visiting the Redmond caves while I was in high school and being appalled at the graffiti in it. It's very fulfilling all these years later to head up a project that gets rid of the graffiti."

"Most people don't realize that caves and cave environments are very fragile," said Laurie Turner, USFS wildlife biologist. "They are a non-renewable resource. So, if something happens in a cave, it doesn't bounce back like what we'd see above ground."

Nissen said that before Wanderlust began leading tours in 2003, staff hauled out 585 pounds of trash from Boyd and Skeleton caves that year alone. Nowadays, trash is minimal, but spray-painted graffiti has always been a problem—especially in Boyd Cave, which is open all year.

Wanderlust and COVA both donated $1,000 for equipment and supplies. A crew of Wanderlust and OHDG volunteers worked the weekend of Sept. 7-9, hauling in buckets of a chemically inert blasting medium quarried from the Willamette Valley, along with work lights, air hoses, compressors and tarps to collect the blast medium, which was hauled out of the cave and sifted for reuse. Volunteers inside the cave wore protective clothing and respirators, while a lone volunteer remained outside the cave entrance to inform visitors that the caves were closed for sand blasting and safety.

"There are some real challenges to sandblasting in cave environments because of high humidity, total darkness and fogging of the protective gear while sandblasting," said Marchington. "It's a lot more challenging than working in a well-lit commercial shop."

Nissen added that since Boyd Cave opened to the public, his hope was that people will appreciate seeing unmarked caves. "Hopefully, this project will shed a positive light and help mitigate the propensity of marking the caves," said Nissen.

"We wouldn't be able to do this cleanup without the help of our partners and we value their involvement greatly," said Turner. "We have a very unique resource here with our caves and we hope the users will respect and help protect this fragile environment for future generations to come."