Closing the Book on Juniper Ridge

After months of stops and starts, the City of Bend removed all the people living at Juniper Ridge

Not a single tent remained at Juniper Ridge Monday morning, the first day the land was officially off limits to campers and hikers. The city-owned land in northeast Bend was where dozens of people lived in tents and cars, at least a mile from the nearest store. 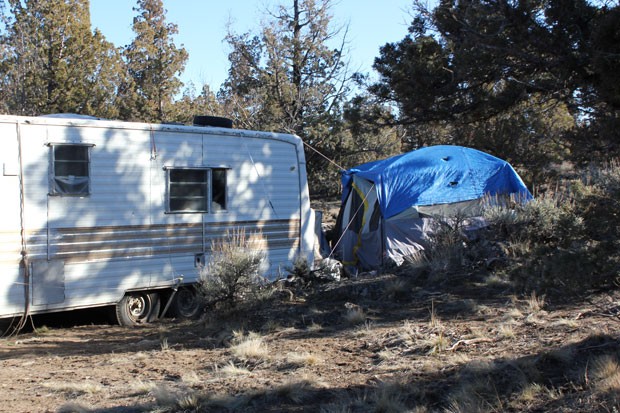 For years, the City of Bend left the campers alone, and service providers made a habit of delivering medical care and other supplies on a weekly basis from a cul-de-sac at the end of Cooley Road, near the corporate headquarters of the Les Schwab Tire Center. But the City wanted to build Phase Two of the North Interceptor Sewer Line Project, which will run directly through the former encampment and may encourage future residential and commercial development.

Jaime Gomez-Beltran, the City's property manager, spent most of last week assisting people off the property.

"Officer Kecia Weaver and I have been helping them. We respected their space and their personal property, and I was in daily contact asking people whether they wanted the things they left behind, or finding a place for them to store it," he said.

But Gomez-Beltran couldn't provide any direction to the campers about where they could go because then the City would be liable, he said. The City has been explicit that its main concern is clearing the construction area.

While some people moved into other scattered camps around Bend, others hiked north, farther into the woods of Juniper Ridge where they now have limited ability to come and go, and where local nonprofits have difficulty reaching them.

The City owns 1,500 acres in the area. The State of Oregon has approved 500 acres for development, with the other 1,000 acres stretching north into Deschutes County. Surrounding the land is property owned by the Central Oregon Irrigation District, the State of Oregon, Deschutes County and a number of private entities. COID owns one access point to the north off U.S. Highway 97, but recently blocked it off with a gate.

"What is owned by the City of Bend on the north side of the property is landlocked," said Gomez-Beltran. "We are talking to other public agencies about how we can provide access."

While the City is supportive of helping the people who moved, it can't approve an access point for social services right now. Shelly Smith, the city's liaison with the unhoused community, echoed Gomez-Beltran's concerns about liability. She told the Source she is working with other agencies to find a legal, authorized solution.

At its height, around 80 people lived at Juniper Ridge, representing less than 10% of the unhoused population in the county. tweet this

For J.W. Terry, the executive director of Central Oregon Veterans Outreach, his vision is to work with other area service providers to set up an established encampment where his organization can provide medical and mental health care on a daily basis, "without everyone running around like chickens with their heads cut off," he said.

"It costs a lot more money without a centralized place: gas and wear and tear on vehicles; the time driving to all these different areas," he said.

COVO will have a seat at the table with other public agencies to discuss access to Juniper Ridge in the coming months. He says COVO makes an effort to stay in contact with unhoused veterans in the area, even when they move.

The City has discussed plans for clearing Juniper Ridge since last summer when an RV caught fire there and some nearby property owners started complaining. The City's attorneys crafted a Juniper Ridge plan in February and the Bend Police Department began issuing eviction notices in mid-April—despite guidelines from the Centers for Disease Control and Prevention, which strongly advised against breaking up encampments during a pandemic. Last week, Bend PD issued 24-hour notices and threatened to issue citations for anyone left trespassing after June 22.

According to Gomez-Beltran, everyone left peacefully. Vehicles moved in and out through the weekend, but no one has slept in the vicinity since Thursday, he said. No one received citations.

Will the government help?

For some housing advocates, Juniper Ridge—and the road access issue—is emblematic of the ongoing saga of helping the unhoused in the middle of a worldwide pandemic.

At its height, around 80 people lived at Juniper Ridge, representing less than 10% of the documented unhoused population in the county. During the City's first effort at eviction in April, the Homeless Leadership Coalition sent a letter to the City stating that homelessness could lead to a public health crisis, especially if there was a COVID-19 outbreak within a camp. The letter stated that there was nowhere for people without homes to go; social service providers were already maxed out. It requested that the city establish quarantine units, sanction encampments and expand access to hygiene, food and meal services.

On May 6, City staff presented the Bend City Council with an array of land feasibility options for long-term camps. But instead of moving forward, the Council decided to wait and see if state legislators would take up the issue the next time they convened.

HB 4001 was an emergency housing bill that died in the Oregon Legislature's short session in February when Republicans walked out in protest of a climate action bill. HB 4001 would have funded a navigation center in Bend and removed regulatory barriers to make it easier to site shelters and camps. The bill will make a reappearance during the state's special session set to begin June 24.