The Dark Side of Your Morning Cup of Coffee | Natural World | Bend | The Source Weekly - Bend, Oregon

The Dark Side of Your Morning Cup of Coffee

Coffee and Birds, it's not always a happy marriage

Not being a coffee drinker anymore, and not being in the bird-researcher loop as many of my friends are, the business of songbird conservation and coffee-growing methods went right over my head. That until Doug Baell grabbed my attention.

"Are you going to do the story on coffee and songbirds?" he asked me one day in the local Bi-Mart.

It seems the age-old problem has popped up again—the one involving landowners' efforts to make an income off their holdings while still looking out for the welfare of this-or-that species of wildlife that live on said land.

For me, the greatest collision of land ownership and the welfare of nature is the destruction of the rainforest to create a business to ostensibly help people improve their lives. The destruction of the Amazon rainforest in Brazil, which began in 1941, has, in my opinion, had a major negative impact on the world's climate. Seems some coffee growers are doing the same thing to North American birds who spend their winters in Central and South America. 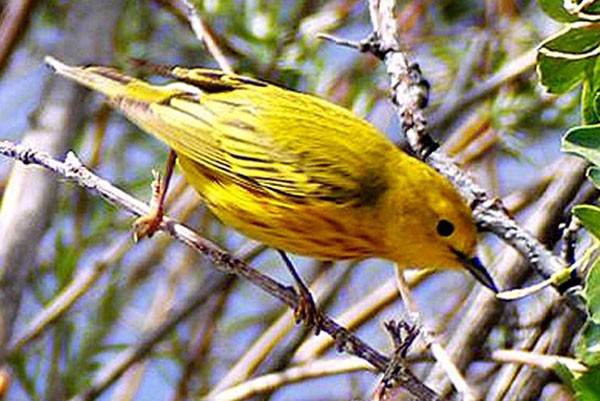 It comes down to this: coffee farms can provide good habitat for birds—including wintering migrants from North America as well as birds that live year-round in the tropics. Those farms can also destroy or damage bird habitat. It's largely a matter of how the coffee is grown.

Bird conservation groups are now reminding us that many of the songbirds of the U.S., such as warblers, tanagers, orioles and grosbeaks, head south to Central and South America in the winter, where many coffee farms are located. By purchasing "Bird Friendly" coffees, consumers can support healthy bird habitat.

People have been drinking coffee in the U.S. long before there was a U.S. The Dutch introduced coffee to the New World in the 1700s. In those far gone it was a forest-floor crop grown under a dense overhead forest canopy. The growers were happy with the profit base and the birds were happy with the way the farmers were doing business.

However, things are not that way today. Machines and chemicals are now being used to grow coffee out in bright sunlight, which is said to be generating a greater profit, and in today's world, "profit" drives everything.

Some coffee farms in operation today still use the traditional method of growing coffee in the shade, where artificial fertilizers aren't necessary. Decaying leaf litter recycles nutrients to feed the coffee plants. Pesticides aren't needed because more birds are around to eat insect pests, and the volume of coffee grown, and the subsequent profit satisfies the investors and farmers.

Tasters have said shade-grown coffee yields a higher-quality brew that tastes richer. This is partly because forest coffee isn't machine but picked by hand, allowing trained pickers to choose only the ripe coffee berries/beans. But it's also more expensive to raise and harvest, therefore not being as "profitable."

Sure, modern coffee growing has introduced sun-tolerant varieties of coffee that can be grown in the open and tend to have higher yields than shade-grown coffee. According to agricultural and environmental scientists, this technique is much harder on the environment, resulting in forests being cut down, with pesticides and fertilizers employed to stimulate higher yields—and higher profits.

In some places, sun-grown coffee has dominated the landscape. In Colombia, about 70 percent of coffee croplands have been converted to sun-grown operations; sad news for birds, especially the migrators.

According to the Cornell Laboratory for Avian Conservation, coffee farms can provide either good or bad habitat for birds, including wintering migrants from North America as well as tropical birds.

Now the ball is in your court. If you, as coffee drinkers, still enjoy the Dutch plantation method of growing organic coffee in a shade-tree environment, which tastes better and is bird friendly—and—said coffee growers are happy with their profit doing so, all's well that ends well.

The next step is to recognize bird-friendly coffee-growing and processing operations. My wife, Sue, has the answer to that one, and keeps after me all the time: "CHECK THE LABEL!"

"Shade-grown" labels often appear on coffee packages, but these words are not regulated and they don't tell you much about the actual growing conditions at the farm. Unfortunately, unless the packaging is accompanied by a third-party certification stamp, such as the Smithsonian's "Bird Friendly" designation, "shade-grown" is often just a marketing buzzword. (Sound familiar?)

As an example, some farms grow shade coffee among sparse, heavily pruned trees or even under banana crops. Unfortunately, these farms often lack diverse forest structure, offer little habitat for songbirds, and require fertilizers and pesticides to keep coffee growing.

Coffee growers looking beyond the profit incentive are now organized, and, if you follow Sue's advice and look at the label, these symbols can and will tell you what's what, and who's who.

Like it or not, both species of these warblers, the Nashville and the Yellow warbler can be negatively impacted by modern coffee growing.