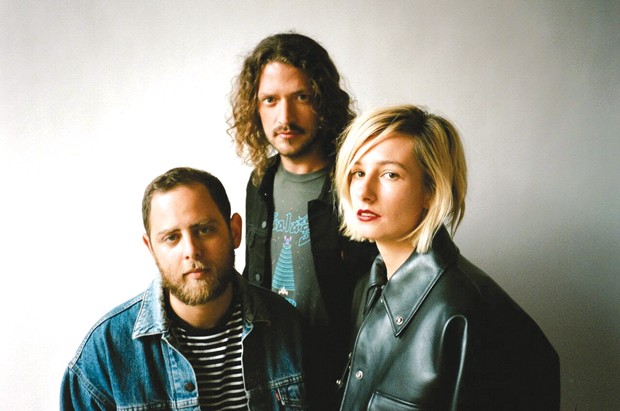 When I first heard female-fronted neo-grunge rockers Slothrust, I added singer Leah Wellbaum to my list of rock and roll spirit animals.

On the new album, Wellbaum challengers herself as a writer, digging into the craft of songwriting on a different level. Listening to the album's first single, Wellbaum experiments with playfulness and word association. The song starts, "Silly sandbox, stupid scarecrow; Jack-o-lantern, chupacabra; sick menorah, candelabra."

Sonically, the band also ups its game by choosing to work with producer Billy Bush, who's worked with a wide array of artists—the band Garbage standing out most.

"Working with Billy was awesome, it was kind of a dream come true," Kyle Bann, Slothrust's bassist, says. "I really liked his work with Against Me!, which is what drew me to him when we were looking for producers. I looked into him a little bit more and saw he'd been working with Garbage forever and a bunch of artists I really liked."

Band members say Bush's knowledge of music technology, down to the coding level, drew the band to his work, helping them sort through ideas, as well as interject some of his own. Bann talks fondly of Bush's sick guitar collection, which included a 12-string Nashville-style guitar altered to produce a really high-pitched, almost mandolin-style sound that they ended up using throughout the album.

"It's a pretty collaborative process," Bann says of making new material. "Usually it stars by Leah writing the songs at home and making demos, either phone demos or videos, and she will send them around and we'll start listening to them before bringing them to band practice."

Bann and I talked about how some bands will have the drummer, for example, come in, record his part and then leave. Not so with these band mates, who incorporate a collaborative element throughout, with Bann and drummer Will Gorin participating throughout the entire recording process.

"There's so much anticipation leading up to it," Bann says of releasing a new album. "You make the record and then you take care of all of the other aspects of releasing an album for months and months. There's this release of pressure in a way where it's finally released, and all that hard work has finally resulted in the thing that we wanted. There's a pretty good sense of accomplishment."

With the release of "The Pact," Slothrust hits the road this fall — playing at Portland's Mississippi Studios before heading to Bend to perform at the Volcanic Theatre Pub. Slothrust does a good job keeping the live performance fun for both the audience, as well as themselves.

"My favorite thing about playing live is seeing happy people in the audience, honestly," Bann says. "You're playing, you're playing and you get a moment to look out into the crowd and you see a bunch of people having a good time — that's everything."