Through connection, The Walter Collective finds art in distilling

"I wanted something that had some character," explained The Walter Collective Founder Matt Melaik. Instead of coming from the expected potato, the character comes from stone-ground heirloom spelt and triticale, a Scottish wheat-rye hybrid typically found in fresh baked bread. 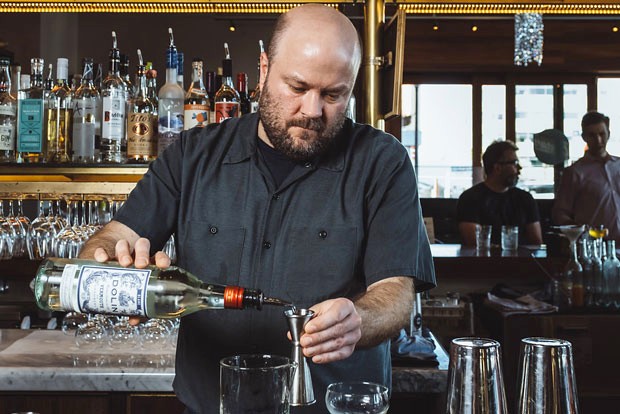 Melaik's grandfather, Walter J. Bade, is the inspiration and name behind The Walter Collective, whom Melaik described as an amateur artist. Melaik said he "always appreciated that in him, to try to make a living in art. He never did, but it was a passion of his. I wanted to do something artistic to continue the story. The collective-effort idea was cool, because if he could have connected with an artistic community, he could have gained traction."

A collective effort started when Melaik approached Brad Irwin at Oregon Spirit Distillers. He noticed Irwin was making a cool genever—the spirit predecessor to the London dry style of gin—and asked if Irwin would collaborate on a gin. Together, they created 45 single-distillation botanicals for the recipe.

"I started with all my favorite flavors in a single bottle," said Melaik, "and it tasted horrible. It was too much. It wasn't really gin." From there, they narrowed the 45 botanicals down to eight. The end product was a gin made with Tuscan juniper—a mellower variety than what you find locally in Central Oregon—as well as grapefruit peel, cassia, cardamom and other spices.

As an industry collaborator, Melaik continually talks to bartenders. "Over the past year there was an increased interested in higher-proof gin, so it doesn't get lost in a complex cocktail," he said. This pushed Melaik to collaborate with Oregon Spirit Distillers again, this time with Head Distiller Brandy Pieper, to create a "navy-strength" gin. Released over the holidays, Walter Navy Gin has more juniper­—as well as a higher proof—making it classic navy strength. "If you make a gimlet," Melaik explained, "you can still taste the gin."

Melaik lives in Seattle, but through collaboration his business really started in Oregon. In 2014 East Bend Liquor was the first store to pick up his gin. Now it's in 80 stores. With a strong appreciation for the support he's received in the state, Maleik says when someone chooses to buy a bottle of The Walter Collective, "it's a real honor to be selected from so many choices."

"Walter Classico"
created by Chris Damcke of Besaw's in Portland

Combine ingredients, stir over ice, strain into a chilled coupe glass. Serve up & garnish with an orange peel.