Coming in Hot: The Return to School for Bend-La Pine Students

Pilots and passengers crash-land in the classroom, with continued COVID detours

Two weeks into the highly anticipated Central Oregon school reopening (for younger grades) and many are assessing the merits of education exclusively through virtual WebEx lessons versus a part-time classroom experience. Students in grades K-3 in Bend-La Pine Schools returned Jan. 25, with grades 4 and 5 going two days a week starting a week later. Starting Feb. 8, middle and high schoolers in Bend, Sunriver and La Pine returned two days a week as well.

"Asking a teacher if they'd prefer to teach via Zoom or be in the classroom is a lot like asking Willie Nelson if he'd rather do Farm Aid via Zoom or live, in concert," said Steve Remer, an audio-visual instructor at Pacific Crest Middle School. "The answer is pretty obvious." 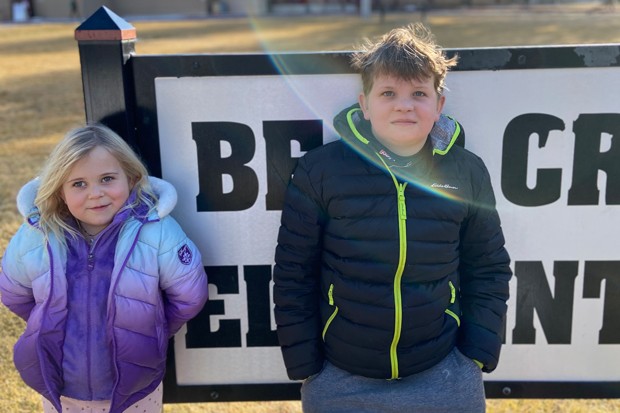 At least some Bend children feel the same. After revving their engines at the back-to-school starting line since fall 2020, students are plugging back into classroom life these last weeks with fervor and eagerness. It makes one wonder if Coronavirus restrictions weren't just a part of an elaborate national plot to make youngsters appreciate the education system.

There's the old adage, "When I was your age I used to walk barefoot, uphill both ways, 10 miles in the snow on broken glass to get to school." Reverse psychology much?

Academic conspiracy theories notwithstanding, the Oregon Department of Education's Ready Schools, Safe Learners, Guidance for School Year 2020-2021 kicked off the mid-winter back-to-school effort, stating, "...every public school will work under the direction of the school district to develop an Operational Blueprint for Reentry that meets the requirements outlined... while tailoring their approach for their own students, staff, and community."

Previously, the state released strict COVID-19 eligibility health metrics that dictated whether returning to in-person instruction would occur. After much back and forth, Gov. Kate Brown announced in late December that those metrics would instead be advisory, at which point BLPS district opted to move to a hybrid in-person model—with options for students to remain in distance learning or online education if their families chose to do so. Some have chosen to remain in online learning out of concern for family members with health conditions; others are waiting for the COVID-19 vaccine to be more widely distributed.

At Pacific Crest, Remer is beyond stoked to connect with his students again‚ but he also feels mixed emotions about earlier classroom closures. After making it these many months without getting sick—including sacrifices like not seeing his widowed mother in the last year—Remer reflects, "I think there are a lot of teachers that felt pretty blindsided by the Governor's announcement that the state metrics for schools were 'optional' and the subsequent announcement by the school district that we were going back in before teachers received the vaccine."

Over the Jan. 24-25 weekend—just before younger students' return to classrooms—over 3,000 educators and school staff in Central Oregon received their first doses of the vaccine at the Deschutes County Fair & Expo Center, a spokesperson for St. Charles Health System told the Source. BLPS has since opted to keep classrooms closed on Feb. 12, to allow staff the opportunity to get the second dose.

“Asking a teacher if they’d prefer to teach via Zoom or be in the classroom is a lot like asking Willie Nelson if he’d rather do Farm Aid via Zoom or live, in concert.”—Steven Remer tweet this

We talked to Remer after he'd received his first dose of the vaccine. "It definitely feels like a weight is lifted a little bit, entering the school filled with kids knowing that I have at least had my first shot."

Remer also echoes reopening concerns shared by others in the community at large.

"There are teachers out there that had to take a leave of absence because it wasn't safe for them to be in this [the teaching] environment," he said. "There are families and students that didn't feel safe enough to come back and had to choose an online option. There are families of students back in school (and everyone else) out there that have not yet received their vaccine. Since the decision is to go forward full steam, my hope is that we can do this school thing as safely as possible, which can ultimately help the community as a whole."

Re-entry from the family viewpoint

For students, back to school at Bear Creek Elementary includes masks and sitting 6 feet apart. Mother of two Shanti O'Connor said both her son and daughter, Nolan (4th grade) and Kia (1st grade) are pleased as punch to be back to the schoolhouse grind.


"I was worried about the protocol and how it would affect the kids," admits O'Connor. "But they go to an awesome school and Bear Creek made it really easy. My kids don't seem to be impacted by the regulations like I thought they would be. They are so resilient."

As a 4th grader, Nolan's week involves two full days in the classroom and two days of school at home. When school was only at home, O'Connor said her son was often bored after finishing assignments at lightning speed. The lack of social interaction with his peers left him depressed, his mom related.

Although these issues are still present on days he isn't in the classroom, two days a week he seems totally happy to wear the mask, sit 6 feet apart and get to see his friends, O'Connor said. When he finishes assignments early inside the classroom, he can be a helper, read quietly on his own or start a new assignment.

"Kids are physical, and the kinetic, tactile energy helps them engage and learn," notes O'Connor, a psychology major and therapist by trade. "This is a conundrum when attempting to learn through a screen."

Meanwhile, O'Connor's daughter Kia said, "I am happy to go back to school because I get to meet new friends." She's less excited about all the work she has to do, but is clear that she prefers learning at school over online.

The social component of school

Remer of Pacific Crest concurs with the family's observations about the undeniable, all-important social component of school.


"I believe the distance learning model we've been in for the past 11 months has been hard for everybody: teachers, parents, and especially students. School is about so much more than just content. It's a big part of a kid's development, socially as a human. Almost every student of mine that I talk to is super psyched to be back in school. Hopefully that will keep them on their best behavior—ha!"

Even so, there are a few things Remer said he'll miss. Capturing the true essence of Bend professional life, Remer said the best part of teaching from home was, "that I didn't have to worry about ironing my clothes before work!"