Coming Soon to a Backyard Near You | Local News | Bend | The Source Weekly - Bend, Oregon

Coming Soon to a Backyard Near You

Curious about those small looking houses popping up in people's backyards? Additional Dwelling Units are on the rise in Bend for plenty of reasons.

Dense housing is on the rise in Central Oregon. Multi-story apartments have started to appear in the skyline and condos and duplexes have seen an increase in construction, but one option where locals are seeing a particular boom is the construction of accessory dwelling units, commonly known as ADUs. Since 2001, 702 ADU applications have been approved in the city, with 516 approvals since 2016. This shows an exponential growth trend that is likely to continue as issues of housing affordability and desire to live closer to city amenities increases. The American Planning Association defines ADUs as "a smaller, independent residential dwelling unit located on the same lot as a stand-alone (i.e., detached) single-family home." They differ from tiny homes in size, and function. The average ADU is around 400 to 800 square feet, while tiny homes are generally less than 300 square feet and often include some aspects of portability. 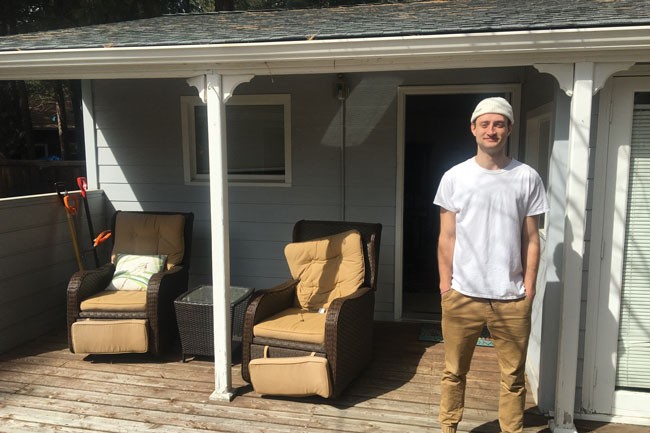 Although sometimes controversial, Larry Wright of Tekneek Architecture believes they are a more socially accepted aspect of dense housing. "Unlike apartments and [other] high density housing, ADUs have been the most socially acceptable way to add density 'in my backyard' as opposed to the NIMBY's (not in my back yard)," Wright told the Source.

Although construction of these units is a relatively recent phenomena garnering attention, ADUs have been around for a long time, and have obtained different names, such as granny flats, coach houses and the mother-in-law suite. Given these names, there has been a historic stereotype associated with who builds and dwells in these units, but in Central Oregon, locals have diverse reasoning to live in ADUs. Reasons might include a desire to live a minimalist lifestyle or finding an affordable space, or being able to harness some extra income from a single-family property.

Moving to Bend as a recent college graduate isn't easy. With high student loans and an average rent of around $1,800 for an 800-square-foot space, according to the rental database RentCafe, there is a big risk moving to the area when trying to establish financial independence. Nik Eriksson is a recent college graduate who found that the affordability aspect of living in an ADU brought a sense of financial freedom as he transitioned from academia into the full-time working world.

"I was able to add a little break where I could figure out what's going on and get some direction." Eriksson says. The affordable aspects of a smaller space made it possible for Eriksson to work full time and actually save some money in the process. This is important in a growing city where the average age of residents is 38, and trending upward. Eriksson also found that although not intentional he appreciates some of the more minimal aspects of living in this space.

"I've come to enjoy more minimalist living. It only takes four minutes to clean the entire place," he said.  There are some hurdles to minimizing space, though. In lieu of a kitchen, Eriksson uses a single sectioned hot plate for daily cooking. "I've never had to microwave rice before moving here," he joked. In spite of these trade-offs though, living in the unit has allowed Eriksson to gain a foothold in a community that's becoming increasingly more expensive.

The demographic that finds ADU’s attractive are young people that likely have not yet started a family, single parents (usually due to lower rental rates), and seniors that are simplifying their lives and no longer need a lot of space.”—Larry Wright of Tekneek Archtects tweet this

Wright, in his experience as an architect, lists the people who are living in ADUs: "Number one is a market renter, two is relative or friend and three is the landowner themselves." For homeowners, ADUs can expand financial opportunities and present some flexibility as aspects of their lives change.

"The vast majority of local homeowners that do not have children living with them are interested in downsizing, and some are choosing to live in their ADU and rent out the big house for a better cash flow," Wright said. Homeowners and those from more established demographics may see ADUs as a positive economic asset that complements downsizing needs.

As far as the reasons for building one, "Additional income is the runaway winner," Wright said. "A place for ailing parents or relatives to live close by is second and third is designing an ADU into a new house build to help justify the high purchase cost by being able to offset some of the mortgage payment with rent from the ADU." Wright believes that not only do ADUs help folks improve their financial situations, but they can also provide benefits for the community as a whole.

"It really helps society with the rising cost of housing. They provide lower cost places to live, provide ancillary income to the average homeowner and allow young family members a transitional place to live before they can afford to rent or buy their own place. With the cost of real estate so high now, an ADU can also help buyers offset the costs on a property they may not otherwise be able to afford," Wright says.

With the state recently eliminating single-family zoning in favor of building allowing more duplexes and multi-family units in areas formerly only zoned for single homes, denser housing is a growing reality for all of Oregon. While there are diversifying reasons for seeking alternatives to traditional single-family housing, a lot seems to stem from people in transition periods of their lives. "The demographic that finds ADUs attractive are young people that likely have not yet started a family, single parents (usually due to lower rental rates), and seniors that are simplifying their lives and no longer need a lot of space," Wright explained. With the multitude of reasons, expect ADU interest and construction to remain on the rise.