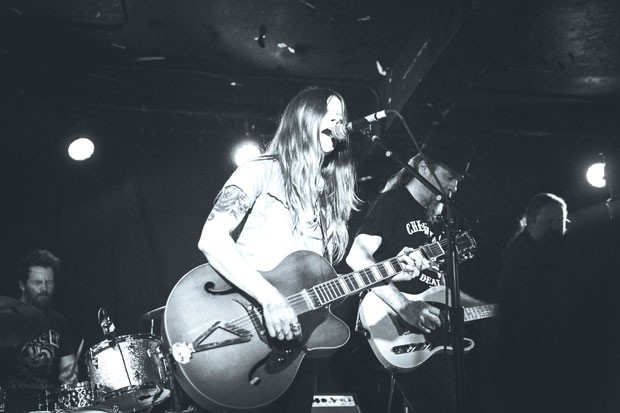 For a long time, Sarah Shook felt her songwriting was cathartic, giving her perspective and allowing her to look at her feelings and experiences from a different view. Over the last couple months, she's realized songwriting is a whole lot bigger than her. Shook's latest album, "Years," takes on themes of depression, anger, exhaustion and overcoming the feelings that many struggle with at some point in time.

"When I talk to people about how my songs have affected them, all of these feelings that make us feel isolated— depression, anger... especially where relationships are concerned, these are all things we have in common," Shook reflects. "A common thread that ties us all together. I'm still sort of processing that and working through it. The sh*t that makes us feel the most alone, it's also what makes us feel the most connected to everyone else."

Shook grew up in a conservative, religious household, only listening to classical or worship music. She started writing songs at age 9, also teaching herself how to play the piano so she could have music to which she could put her words. In high school, Shook taught herself to play guitar because she wanted something more portable. At the time she loved being outside and writing music. Once she heard country music for the first time, she knew she'd found her place.

"When I started out I was doing a lot of acoustic, indie rock stuff because I didn't have a band," Shook recalls. "When I first heard country music, I had already been writing songs that would be considered country. It was sort of validating and felt like I wasn't the only person out there creating music like this."

Shook has a raw, honest songwriting style that echoes the feelings we all share as humans. Songs about hard drinking and hard living paired with deep regret and loss place her perfectly within the "outlaw country" genre. In the past, this style of country music felt restricted to a male voice. Shook and singers such as Nikki Lane have brought a female perspective to the genre, which only continues to grow in popularity.

"I'm pretty excited about it," Shook says of the rise of female singers and the future of outlaw country. "It seems like there's a lot of good talent coming out, and not only coming out but getting the attention they deserve from the press. As always, it's more of a struggle for women versus men, but with all of the attention people like Nikki Lane and Margo Price are getting, I'm stoked about it."

Shook comes as a relatable voice in outlaw country music. Her honest words blend with traditional country twang to create music we can all relate to. Those common themes — depression, anger, exhaustion — and how we overcome and deal with those feelings truly speak to the human spirit. "The Bottle Never Lets Me Down" conveys feelings of being let down and only being able to rely on booze to be there. "Good as Gold" lets her lover know that if he leaves, he'll be good as gold because she's gone.

Up next for Shook and her band The Disarmers: wrapping up a stateside tour and then heading to Europe in the fall. After a lot of touring, they'll take some time off for rehearsing and pre-production for the next record. Shook loves touring and being on stage with her bandmates, but looks forward to having regular practices and getting ready to go into the studio.

"There's good energy up there," Shook says of being on stage. "We all sort of play off of each other and give each other space to do our own thing."