In a recent sweep, Deschutes County bars win the “prize” for the most COVID-related health and safety complaints in the state

July 21, 2020
14 comments
The Oregon Liquor Control Commission reported eight restaurants and bars in Deschutes County, and at least one in Jefferson County, to the Oregon Occupational Safety and Health Administration for violating COVID-19 prevention measures earlier this month. The alleged violations include a handful of locations in downtown Bend. 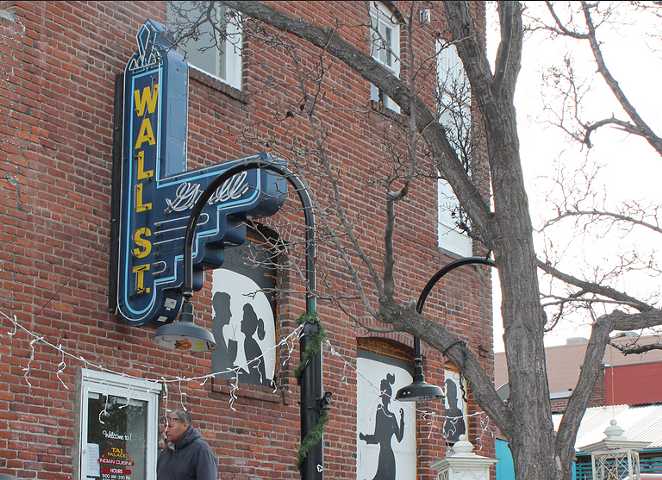 During the first two weekends in July, OLCC representatives visited over 2,200 Oregon businesses with a liquor license. The OLCC was following Gov. Kate Brown’s orders to "ensure restaurants, bars, other businesses, and their patrons are complying with state alcohol laws, OLCC rules, and the requirement to wear a face masks in indoor public spaces."

On July 1, Gov. Brown extended the face covering requirement to include indoor public spaces, including bars and restaurants as well as grocery stores. In a July 7 press release, OLCC’s report showed that Bend-area businesses had a higher number of non-compliant businesses compared to establishments in Portland, Salem, the north Oregon Coast and eastern Oregon.

“OLCC inspectors reported some licensees or their customers were showing clear disregard for social distancing requirements,” stated a July 3 press release from the governor’s office. Following the first and second weekends in July, OLCC officials sent two batches of complaints for COVID prevention violations to OHSA, the labor agency responsible for managing worker safety and other workplace complaints. Both weeks of the sweep, businesses in Central Oregon made up at least half of the total complaints statewide.

OSHA is currently investigating each location reported to the agency by OLCC to determine whether the claims warrant fines for the businesses involved.

By the second weekend of sweeps—July 10, 11 and 12—the OLCC started cracking down harder, issuing verbal instructions to 81 bars and restaurants in the state and forwarded another 16 incident reports to Oregon OSHA. In a press release the OLCC stated that these businesses were “willfully choosing not to follow the guidelines.”

The second week included three two-time alleged violators: The Astro Lounge, Wall Street Bar and General Duffy's Waterhole, and new alleged violators at The Bite, Seven Nightclub and The Dogwood Cocktail Cabin and Over The Edge Tap House (Terrebonne). The Creekside Beer Garden and Cross Street Station 76, both in Prineville, were also cited. The rest were from Grants Pass, Medford, Toledo and Portland.

A few days before the OLCC reported the Wall Street Bar to OSHA for a second time, one of its employees tested positive for COVID-19, according to Dolly Miller, who manages the bar for her parents. Miller said she then shut down the bar to await instructions from Deschutes County Health Services. Miller told the Source it took the agency five days to return her call. Then, during the weekend of July 11, OLCC reported the bar to OSHA for “lack of social distancing and no mask use among patrons.”

“The mask regulation for customers outdoors was not in place when we got cited,” Miller said. Gov. Brown’s outdoor mask requirement for crowded public places went into effect July 15, at least three days after the second OLCC report.

“Everything changes on a day-to-day basis, with regulations changing from one authoritative figure to another—whether that’s the Oregon Health Authority, OLCC and OSHA. When rules change, it doesn’t necessarily change on their website.

“I wish there was some help for employers. All the businesses out here are trying their best to do what we can to help keep the community safe; it’s of utmost importance to me to protect my employees and patrons,” Miller said. “I’ve been buying masks by the hundreds. I have sanitizer everywhere all over the building.”

Next-door Taj Palace Indian Cuisine is technically under investigation by OSHA too, because it shares a liquor license with Wall Street Bar, but the businesses are in the process of applying for separate licenses, Miller said. (See Miller's full post about these incidents below.)

Josh Maquet who runs the Astro Lounge said the OLCC targeted the bar for several sting operations already this year, in addition to many others in the past. "The OLCC is like the Mafia," he said. Maquet told the Source his staff are vigilant about masks and social distancing for themselves and customers because they need their jobs: three of them never received unemployment during lockdown.

At General Duffy’s, the complaint centers around its customers. OLCC officials reported the business twice because patrons were allegedly not wearing masks and not social distancing, though on both occasions the OLCC noted that the bar’s employees were wearing masks.

Overall, the vast majority of hospitality businesses in Central Oregon are following the rules, the OLCC stated in a press release. OLCC stated its incident reports were filed against only 1% of total businesses originally inspected in the state.

“It’s unbelievable that a sliver of the hospitality industry is putting at risk everyone’s reopening economic investment,” said Steve Marks, OLCC executive director. “It’s a shame that so many businesses in that industry are doing their all to protect employees and customers and just a few are gambling with everyone else’s health and livelihood.”

Investigations usually take several weeks and OSHA cannot report on any details of these investigations. Businesses could be fined anywhere from $100 to more than $100,000 for willful violations, according to Aaron Corvin, OSHA spokesperson. 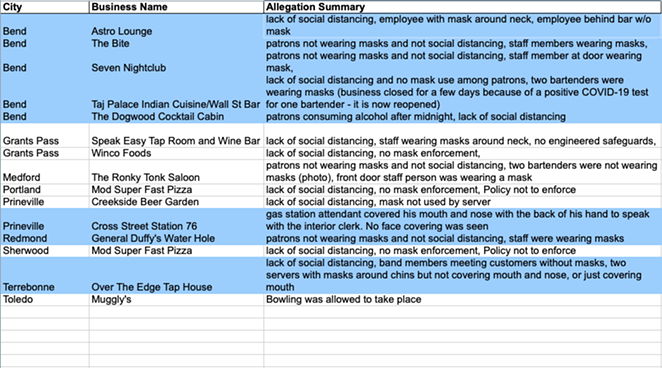 Editor's note: This story was updated 7/23. An earlier version stated that the OLCC had reported nine locations in Deschutes County; one of those, Over the Edge Taphouse, is actually in Jefferson County.