Three lessons learned at The March For Our Lives 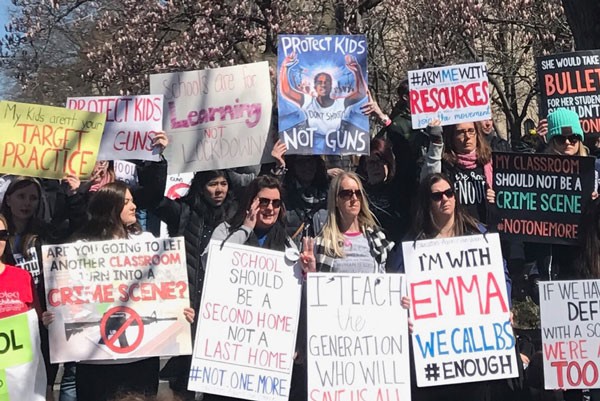 Anything this big can't be that good, you'd like to think.

Last year's Women's March was rightfully criticized for blinding whiteness and a recalcitrant approach to intersectionality, but after a million or so people again appeared out in protest for last weekend's March For Our Lives in Washington, D.C., it's apparent that the 2017 march set the Trump-era precedent for large protest, and the importance of that is incalculable.

Parkland's student activists, a stunning example of the "don't mourn, organize" ethos, have their crap together when it comes to what to say about guns in this country, while Democrats five times their age leading the so-called #resistance just don't and never will. The march called attention to school shootings and the gun lobby and then it kept on pivoting to include any and all victims of gun violence and acknowledging bias, privilege and racial disparity along the way. It took the Women's March's homogeneity and tilted it toward intersectionality.

At its core, it was an anti-National Rifle Association parade (wisely, because protest should offer hope always, it was cast as The March For Our Lives) and that's a good thing because the NRA is a death cult and has nothing useful or sincere to say about gun rights. If an undercover video produced by Channel 4 exposed NRA big wigs meeting in the molten core of the planet, sacrificing animals and fellating AR-15s, would you really be surprised?

One of the million or so marchers in Washington, D.C., on Saturday was Nora Ludden. She knows firsthand how long the gun access and gun control debate has circled the drain. She's a survivor of the 1992 Simon's Rock shooting, in which 18-year-old Wayne Lo, a student at Simon's Rock College of Bard in Massachusetts, murdered two people on campus and wounded four after purchasing a semi-automatic rifle at a sporting goods store.

"This terrible thing has been going on for a very long time, I was a teenager myself when there was a shooting at my school," Ludden said. "The shooter was able to get a gun very easily with no waiting period or background check or anything."

Ludden is one of many Simon's Rock alumni who signed a petition demanding "more access to mental health services and less access to weapons," following the Newtown, Conn., shooting. The Newtown shooting happened exactly 20 years after the Simon's Rock shooting—Dec. 14, 2012 and Dec. 14, 1992.

"You hear a 'pop,' thinking they were fireworks; they weren't—you see melanin on your brother's skin turned grey. Ricardo was his name, can ya'll say it with me?" —Edna Chavez tweet this

"Now, you see this continue for decades," Ludden said. "To see my kids still dealing with the same thing I did is just really heartbreaking."

You've surely seen the march's speeches by now, especially from Parkland's David Hogg and Emma Gonzalez, but don't forget about Edna Chavez. The 17-year-old South Central Los Angeles activist paid tribute to her brother, Ricardo, who was shot and killed, culture-jammed much of the boring big march bullshit with personal-is-political poetry, and pretty much made it clear how school shootings and the kinds of gun violence she has endured—and thousands of others have, in cities such as Baltimore or Chicago—intertwine.

"You hear a 'pop,' thinking they were fireworks; they weren't—you see melanin on your brother's skin turned grey. Ricardo was his name, can ya'll say it with me?" Chavez asked.

"Zero tolerance policies do not work," Chavez said. "They make us feel like criminals."

The Guardian recently published "Our manifesto to fix America's gun laws," written by the staff of the Marjory Stoneman Douglas High School newspaper and among the demands was one to "Increase funding for school security," and here was Chavez, calling "B.S." on it.

The lesson: Always listen to people younger than you are, even when you think they're wrong—especially when you think they're wrong. As very young people act very adult and organize, a whole bunch of adults in power act like children, especially in the White House and all around it. Trump's revolving-door administration welcomes warmongering mustache man, John Bolton. What was Bolton doing when he was the age of most of the Parkland students, you may wonder? He ran the Students for Barry Goldwater Campaign at the very bougie private school he attended outside of Baltimore.

Before South Side Chicago rapper Vic Mensa performed at the March For Our Lives, he mentioned Sacramento's Stephon Clark, shot 20 times by police in his own backyard on March 18, holding a cell phone which cops claim they thought was a gun (they also muted their body cameras during the deadly encounter), and Decynthia Clements, from Elgin, not far from Chicago, who was shot and killed after an extended chase with the police wherein she also lunged at cops with a steak knife and set the inside of her car on fire. An "imperfect" victim of police violence, but a victim nonetheless.

Police have killed almost 300 people this year. Clark, whose death it does not seem will go away quietly, was shot and killed on March 18—there have been nearly 30 police shootings since then.

The lesson: Cops are guns—instrumentalized, surveilling, means of destruction.