A quake near Anchorage highlights the importance of preparation and monitoring. 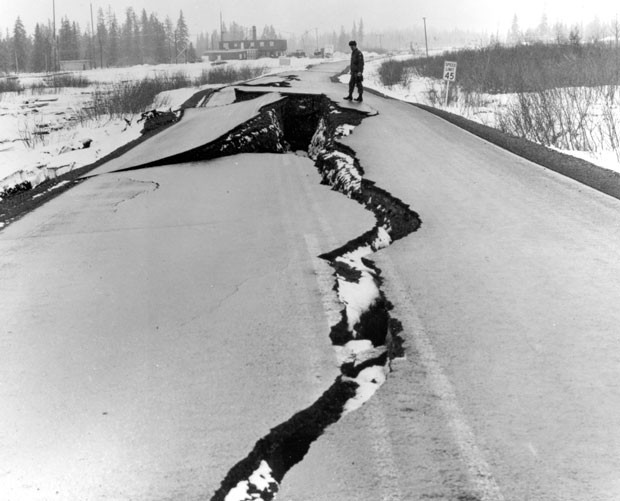 At 8:29 a.m. on Nov. 30, part of the rock slab underneath the Pacific Ocean 7 miles north of Anchorage, Alaska, shifted, causing a magnitude 7 earthquake. As Anchorage was preparing for the day, the quake ripped apart roads, shattered windows and ruptured water and gas lines in and around the city. While officials are still assessing the damage, the biggest impacts appear to be to infrastructure — there were no reports of deaths caused by the quake.

The response to such an event is extensive and wide-ranging: Across the globe, seismometers — instruments that measure tiny ground movements — recorded the earthquake's signals. Scientists at the Alaska Earthquake Center and elsewhere started piecing together what happened and monitoring the hundreds of aftershocks that followed. Federal officials briefly issued a warning for a tsunami, until the danger passed. Later in the day, the Federal Emergency Management Agency helped coordinate disaster relief efforts, such as opening up shelters for Anchorage residents displaced from their homes.

In some areas, like a road north of Anchorage, the earthquake caused the ground to liquefy and flow out from underneath roadways, collapsing the pavement into jagged chunks. That process, called liquefaction, happens when a quake shakes earth saturated with groundwater and made of a less rigid material than solid rock, like sand or mud. "It's very important for us to recognize what areas are prone to liquefaction so that we can either avoid building there, or engineer around it," said Jackie Caplan-Auerbach, a geology professor at Western Washington University.

A federal program called the National Earthquake Hazards Reduction Program supports all of those activities and more. Last week, a bill reauthorizing the program — bolstering support for it in the future — landed on President Donald Trump's desk after both the Senate and the House passed it.

The bill was co-sponsored by several Western lawmakers, including Sens. Lisa Murkowski, R-Alaska, and Dianne Feinstein, D-Calif. Congress' explicit directive to fund the earthquake program expired in 2009; since then, lawmakers have been allocating money for it in a piecemeal fashion, year-by-year. The new bill authorizes Congress to spend millions of dollars over the next five years, including at least $30 million per year to a U.S. Geological Survey program responsible for monitoring earthquakes and developing an earthquake early warning system so sensitive it could issue alerts to communities several seconds before they're hit by strong shaking. The USGS is rolling out a prototype of the alert system this year, but it's limited to California, Oregon and Washington, and does not include Alaska.

The legislation also includes a few updates to the 1977 law that created the national earthquake program. One of the most significant revisions, said Michael West, the director of the Alaska Earthquake Center, is the explicit inclusion of tsunamis in federal earthquake assessments. That's important because in Alaska and the Pacific Northwest, tsunamis can be the most deadly impact of an earthquake: Of the 139 people who died because of a magnitude 9.2 earthquake in Alaska in 1964, 124 were killed by tsunamis. "If you're leaving out the tsunami risk, you are short-selling those areas," West said.

The relatively small impact of Friday's earthquake stems from a history of preparation: Experts praised Anchorage's building codes, which were bolstered after the 1964 quake, for the lack of widespread building collapse. Still, the region sustained extensive damage to infrastructure and roads, which the USGS estimates could cost tens to hundreds of millions of dollars to fix.

Alaska will still be dealing with the aftermath of the quake — and preparing for the next one — long after the attention of the nation and its lawmakers has moved on. "That's where legislation helps," West said. "It says, 'Hey, let's keep this on the radar so we're ready, or as prepared as we can be.'"