Congressional District 2 is a Huge Geographic Area. Break It Up, Already.

Leaders in Salem have promised a series of public meetings to present those plans, and each of us should care to attend

It's been expected for quite some time, but last week, it became official: Oregon is picking up a new seat in the U.S. House. Oregon narrowly missed adding a seat following the 2010 U.S. Census, so it comes as little surprise that we'd add one now, with our state continuing to be a place with significant in-migration.

Now, the big question: How will the lines for the sixth Congressional seat be drawn, and how will Bend and Deschutes County be represented in that new six-seat scheme? Redrawing the electoral lines is never an easy task, and redistricting is always fraught with partisan wrangling. Oregon's laws around redistricting require those drawing the new lines to avoid drawing them to favor one political party over another, to avoid diluting the voting strength of one language or ethnic group and to avoid, in general, dividing "communities of interest." In addition, each district must have roughly the same number of people. 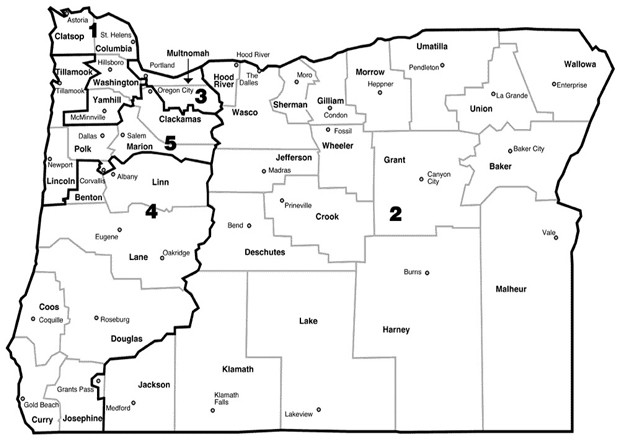 With those criteria in mind, it begs the question: Does Oregon's Congressional District 2—the seventh-biggest district in the nation, geographically speaking (and that counts entire states with just one district)—achieve the goal of combining "communities of interest?" Does Bend, with its recreational economy and a near-equal tally of Democrats, Republicans and non-affiliated voters, share common interest with the ranching-focused economies of northeastern Oregon, or the orchards of Hood River, or the weed farms of southern Oregon?

Currently, all of these communities are united under the banner of CD2, which is currently represented by freshman Congressman Cliff Bentz (R-Ontario). Before then, it was represented by Greg Walden, whose reputation of being rarely visible in the district launched the phrase, "Where's Walden?" While we joined in voters' dismay at rarely seeing our representative, is it any wonder that our Congressperson would be rarely seen, when their district stretches across 69,491 square miles?

As this redistricting process unfolds throughout the late summer, we'll avoid framing this in a political fashion—as is the natural inclination for anyone who belongs to one party or another—and instead look at this as, "what is going to be best for Bend?" If you take off your partisan hat, what is best for Bend, booming and poised only to grow even more, is to see more focused representation for our district, so that no representative sees themselves having to travel nearly 70,000 square miles to provide an adequate offering of town halls in the communities they represent.

Some might argue that the counties east of the Cascade crest are too small in population to bother with significantly changing the boundaries of the 2nd Congressional District in any significant way this time around. Sen. Tim Knopp (R-Bend), who is serving as the vice chair on the 2021 Senate Committee on Redistricting, may very well, were he to think along party lines, favor leaving CD2's lines largely alone, since it's been held by a Republican since 1981. But were he to think like a representative of Bend, he would do well to favor a vast restructuring of every Congressional district boundary so as to favor one of Oregon's juggernauts of growth. What is best for Bend, in our opinion, is a smaller geographic district that allows its representative to focus on a more specific community of interest. Where, then, do the lines get drawn? What communities of interest would Bend align with, knowing that each district needs to include a population of over 700,000 people?

The facts we have outlined here should make one thing clear: Redrawing Congressional boundaries is complicated and must be approached with a lens of bipartisanship. In the spirit of compromise and unity, the Oregon Legislative Assembly should be commended for agreeing to make its redistricting committees as balanced as possible, with five of the 11 combined House and Senate committee members being Republicans. (In exchange for this, Republicans have agreed not to stymie any more legislation this session—a welcome advancement after several sessions of walkouts.)

More locally, it would behoove Bendites to pay close attention to this process, and to advocate for a Congressional map that sees Bend aligned not with a vast geographical area like the one currently in place for CD2, but one that accounts for the growth that is coming and the political influence that is already here. Leaders in Salem have promised a series of public meetings to present those plans, and each of us should care to attend.