Connection with the Moon | The Source Weekly - Bend, Oregon

Connection with the Moon

Lindsey Stirling could hardly have experienced a more abrupt and dramatic stop to her music activities than what happened when the pandemic hit in early 2020.

She was on a plane with her dancers, band and crew heading to South America to start a leg of her "Artemis" tour, when word came that the tour was being canceled and it was time to turn around and fly back to Los Angeles. Not surprisingly, it took a minute to grasp what had just happened. 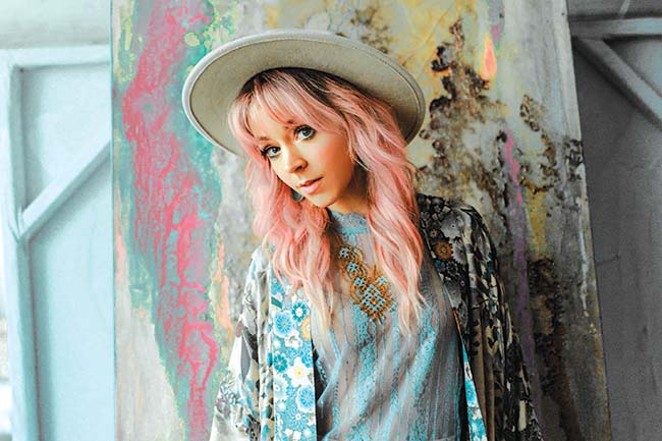 "At first I definitely thought my agent and my manager were just being over-protective," Stirling recalled in a recent phone interview. "I was like, I can do this. We're healthy, we're good...So I called (my manager) and I said 'Please let us do this. My crew, they're all willing to stay.' And they basically told me this is bigger than management and agents. This isn't a choice. You're coming home. It was just such a shock."

Stirling spent the early part of the pandemic in Missouri with family before eventually returning to her home in Los Angeles, where she rode out the rest of the lockdown. Now with COVID restrictions being eased, she has at long last resumed her "Artemis" tour (named after her most recent album, which was released in fall 2019). Her show is getting a bit of a makeover from where it was when the plug was pulled on touring.

"We decided to completely re-do all of the costumes; one, because they just got so worn out on the last tour," Stirling said. "I'm super hands-on with all of that stuff and it's really fun for me.

"And now I've had more time to see what fans love about the album," she said. "I've been able to see what songs and what things they've (been responding to) the most. So I am switching up the set a little bit based on what I've seen over the (recent months)."

Her show figures to feature the two main components that have made Stirling a unique fixture on the modern music scene—a diverse range of songs from all five or her albums that set her violin playing to a dynamic backdrop heavily influenced by electronic music and plenty of choreography for Stirling and her four dancers.

Stirling began developing her sound and performing approach about 15 years ago, when she launched her YouTube channel. She really began to catch on online after competing on "America's Got Talent" in 2010, generating enough activity that she was signed by Lady Gaga's manager, Troy Carter.

This led to the release of Stirling's self-titled debut album in 2012. Three more albums followed over the next five years as she refined her classical-meets-EDM sound and did multiple tours.

"Artemis" represents arguably Stirling's most ambitious musical venture yet. In addition to including 13 songs, the project also features a six-part comic book series that tells the story on which the album is based and videos for several of the songs, making for a true multi-media project.

Stirling came into the "Artemis" project after an album, "Brave Enough," on which she grappled with loss and grief following the deaths of her father and best friend. She was in a much better place emotionally and wanted the next album to reflect both past phases of her life and the much happier person she had become.

“There was a time in my life I had felt like I was so covered up by sadness, grief, depression, shadow, whatever it was, that I felt like I had lost myself. I didn’t know what I was doing anymore. But then I felt myself come back.”—Lindsey Stirling tweet this

"When I was thinking about concepts and album artwork and what not I just kept drawing the moon. That kept coming up in the artwork," Stirling said. "And I love that the moon goes through phases. And the phrase came to my mind that just because the moon is covered in shadow doesn't mean it's not still there. There was a time in my life I had felt like I was so covered up by sadness, grief, depression, shadow, whatever it was, that I felt like I had lost myself. I didn't know what I was doing anymore. But then I felt myself come back. Oh, it's not that I was gone. It's not that I lost who I am. It's that I was covered with shadow. And then I really started thinking who is the goddess of the moon?"

In Greek mythology, that goddess is Artemis.

"So it all started more with the concept of the moon, and then I became fascinated with, 'Oh my gosh, Artemis is the goddess of the moon and she is this strong, fierce warrior who also is the huntress, but also she's soft and she's nurturing.' She's the goddess of fertility," Stirling explained. "I thought that was such a cool metaphor for women. We can be strong and fierce, but also we have this special nurturing side. So I just fell in love with what she represents in every way and this story just kind of poured out of it in a very organic way."

The Athletic Club of Bend