Located in the new food cart lot, The Podski, The Tin Pig is southern food for crunch junkies

The Tin Pig food truck checks all the boxes for Southern favorites: fried chicken, fried green tomatoes, hushpuppies and cracklin'. Married Chef-Owners, Jack H. Tate and Yvonne Carmean, both have families with roots in the South. When they couldn't find anyone serving the Southern food they wanted, they saw an opportunity. Prior to opening the food truck, both worked at Immersion Brewing, Tate as executive chef and Carmean as pastry chef.

The Tin Pig is nestled in The Podski food truck lot on Arizona Avenue, next to Tokyo Starfish. The cart opened April 2. The Podski, meanwhile, officially opened May 4, with a grand opening still to come. With at least three new food and drink spots across the street, including Foxtail Bakeshop, Fix and Repeat, and the hip River Pig Saloon (on the back side of The Box Factory), this newly revamped zone on Arizona is already drawing quite a crowd.

Naturally, I had to try the Southern favorites, starting with cornmeal-dusted fried green tomatoes served on top of pimento cheese and sprinkled with fresh pico de gallo and arugula. The fresh vegetables made me feel like I was eating a light salad.

The hushpuppies were a different story—completely indulgent. Basically fried cornbread, the name is said to have come from hunters and fishermen frying a simple cornmeal mixture to keep the dogs quiet. The Tin Pig hushpuppies were far from simple, made with pickled jalapeño, sprinkled with salty cotija cheese and served with a side of creamy charred pepper dip, with a deep crispy outside and soft middle. I wanted to eat them all, but I needed to save room.

I could still hear the curled, fried pork rinds crackling when Tate served them to me. My dining partner tried one and said they were some of the best cracklin' he's ever had, but he just couldn't get over the fact that it's pig skin. This is coming from a guy who grew up on a ranch and butchered many animals. Me, I wasn't at all squeamish about the crunchy, fatty, salty snack.

Fried chicken is ubiquitous with Southern cooking. Even though she couldn't really cook much else, my grandmother, who hailed from the South, even knew how to make real fried chicken. The Tin Pig has four different fried chicken sandwiches on the menu. I tried the Nashville, a version of hot chicken prepared by marinating the chicken in a liquid seasoning then flouring, frying and finishing it off with a spicy cayenne sauce. That's all topped with a honey white Sparrow Bakery bun, mayo and dill pickles. The crunch on the chicken was incredibly crispy. The breading included corn meal, and those grains added a whole new texture dimension to the already crunchy breading and the smoky spice. My lips were on fire, but it was delightfully hot. The only thing that would have made that sandwich more enjoyable would have been a few more pickles. I'm a sucker for sour and spice.

An item on the menu that you wouldn't immediately think of as Southern is the carnitas burrito. Tate grew up in Tucson, Ariz., and I could tell when I took my first bite that he knows how to make Mexican food. The carnitas, like everything on the menu, is made from scratch. Some of the pork was soft and tender and other bites were crispy, just as a proper carnitas should be. The burrito also included beans, pico de gallo, arugula, pickled onion and cilantro cream, all with a lot of flavor and spice, but not a ton of heat. My partner and I agreed that this was the best burrito we've had since moving from Phoenix. Tate may excel at Southern food, but I hope he keeps bringing the Southwest. 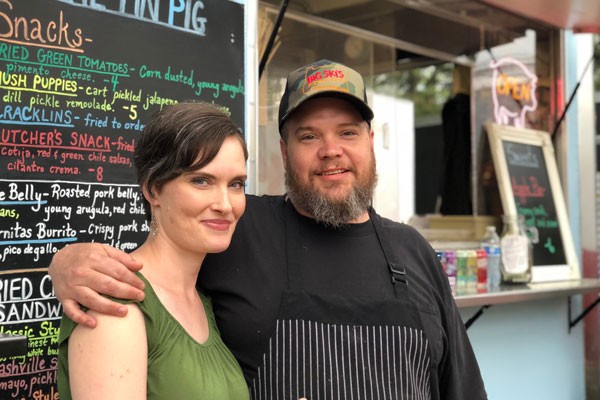 I ordered a lot of food, but Tate didn't want me to miss out on the apple pie made by Carmean. It's a dish that has been on the menu of every restaurant they've worked at together. The crust was soft and buttery, the apples had a nice bite to them and the sweet, crispy crumble on top was delicious. There was a bit of a soggy bottom on the pie, but I really didn't care because everything tasted so good. Mary Berry from the Great British Baking Show may think differently, however.

For Tate, doing what he loves means it doesn't feel like work. "The moment it becomes work I don't want to do it," he says. Since the cart opened in April they've been really busy, even running out of menu items from time to time. Tate said, "It's a little crazy. I'm like the Tazmanian Devil and getting my butt kicked, but it's a blast."