The world of professional, competitive cornhole comes to Bend

While cornhole might seem like a low-commitment game to drunkenly play on the lawn, for some, it's a way of life.

Renee Yocum moved to Bend from Lake Oswego with her husband Chris in 2018. Soon, they were playing cornhole daily at Avid Cider Co. "I enjoyed the game so much that I slowly got more and more involved," Yocum said. "Our friend Dustin Close had been toying with the idea of starting a professional league in Bend, but hadn't gotten it up and running." In 2019, Close and the Yocums organized High Desert Cornhole. Yocum, now the regional director of the American Cornhole League in Bend, detailed the many ins and outs of professional cornhole. 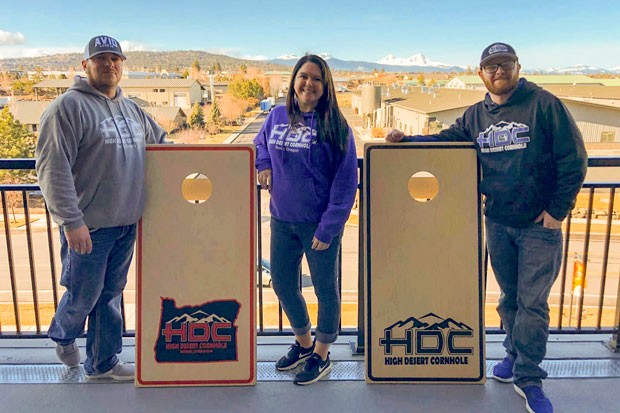 "There wasn't a space in Bend for those who wanted to get involved in professional cornhole. Players of all skill levels are welcome. It's an awesome sport, and we want to make it accessible to everyone."

How does one become a cornhole pro? "Points are earned by participating in tournaments," Yocum explained. "First you start out as a novice player, then you move on to the intermediate level. You'll learn the different shots, and how to use the sides of the bag, things like that. The next level is advanced, or professional." She explained that local tournament participants rack up between 10 and 20 points. More points are gained for regional tournaments.

Boss of the Bags Cornhole Tournament take places Saturday at Pickleball Zone. Teams of two pay $50 to participate, with the chance for the top three teams from each bracket to win cash payouts totaling $800. "Most people don't view cornhole as a sport," Yokum said. It absolutely is - it's competitive, but laidback. You can drink during tournaments, you'll meet a bunch of great people... it's an all-around good time."