March 04, 2020
2 comments
This story has been updated from the print version.

It's not lost on me that as I write this, the information contained herein could be outdated by the time the press delivers the print version to our newsroom. As representatives from the Deschutes County public health team said Monday, the situation is "changing hourly."

So it goes with the developing situation that is novel coronavirus, which state health officials confirmed Feb. 28 had hit Oregon. As of Tuesday, three people in the state have "presumed cases" of COVID-19, the virus first identified in China in late December. The Oregon State Public Health Laboratory in Hillsboro was certified to process COVID-19 tests Feb. 28. Just hours later, it confirmed its first "presumed positive" case. The Centers for Disease Control and Prevention in Atlanta has to confirm that and the other cases before officials can say they're 100% confirmed. *Update, 3/4: the CDC confirmed the first case as positive late Tuesday. 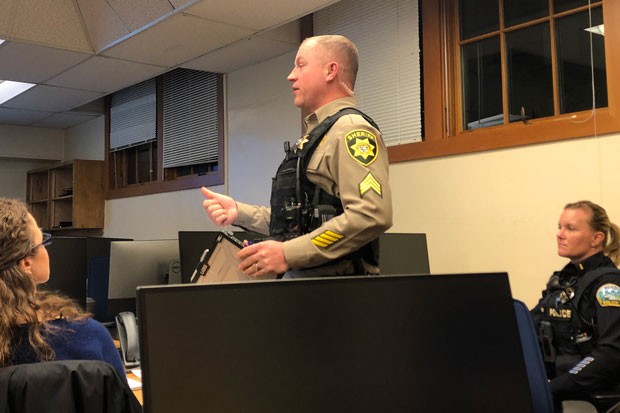 At a press conference Feb. 28, officials from the Oregon Health Authority said the Oregonian with the first presumed case had not recently traveled to China nor any other of the countries affected by novel coronavirus. Neither had the other two Oregonians who subsequently tested positive. Because of that, epidemiologists believe that many more people in Oregon have the virus than they're currently aware of. Meanwhile, nine people have died in Washington from COVID-19.

As the situation continues to result in more questions than answers, the Oregon Health Authority and other public health officials are underlining the basics of prevention: Stay home if you have a cough or fever. Wash your hands thoroughly and often. Cover your coughs and sneezes, preferably with a tissue, and then throw the tissue away. And before going to the doctor, call the office so they can take steps to protect their own teams, should it turn out you have the virus.

A room crammed with computers and long tables in the basement of the Bend-La Pine Schools Administration Building in downtown Bend serves as a command center for community incidents like this. County, city, school and other officials convene the Joint Incident Center—nicknamed "the JIC"—when they're dealing with a community issue that requires a coordinated response.

The local JIC—a concept originally developed by the Federal Emergency Management Agency to foster information sharing in communities—has been opened twice in the last three years: once during the heavy snowfall of 2017, and again during the Great American Eclipse that same year, said Ron Paradis, executive director of college relations at Central Oregon Community College and the local JIC's deputy.

"We don't have a public health crisis in this community at this moment; we have an information crisis," Repman said, saying that too much false information that's not accurate or clear is being spread via social media.

Monday's meeting included updates from various agencies about their plans to prevent and manage novel coronavirus. Repmann detailed how local schools are working to ramp up and share messaging around preventing illnesses, including flu. Schools will start to see more signage asking students and staff to wash their hands when they arrive or leave. If someone contracts the virus in the local area, additional measures might include having students refrain from serving their own food in self-service areas, Repman said.

"The custodians are working extra hours right now to clean up all those high-touch areas," Repman said. "We know that schools have a significant financial impact additionally on the community when they're closed, so we're doing everything we can to keep everybody healthy, including asking people to stay home if they have a fever over 100.5."

Representatives from local law enforcement, including Bend Police and the Deschutes County Sheriff's office, also detailed Monday how they're reviewing best practices with duty officers, and those working with inmates at the Deschutes County Adult Jail. Bend Fire and other first responders have received training in using the proper protective gear. Local 911 operators have been given a script to help them identify people who may have the potential to carry the virus, said Patricia Connelly, administration battalion chief for Bend Fire and Rescue.

On Tuesday, St. Charles announced new protocols aimed at prevention. Each facility now has a limited number of access points. When someone comes in, they're required to sanitize their hands, and to wear a mask if they're arriving with a fever, cough or cold symptoms. Visitors may not be granted access if they're not seeking medical care.

"We may not allow people into the building if they could spread infection, but are not in need of medical attention," read a press release from COEIN Tuesday.

COEIN's website, coemergencyinfo.blogspot.com offers up-to-date information for the local area. Community members can also call 211 for general information and questions. Also check out the websites of the CDC and Oregon Health Authority to answer frequently answered questions and more.

Correction: In the print version of this story, we stated that Bend- La Pine Schools are advising people to stay home when they have a fever over 105. It's 100.5 degrees, not 105. We regret the error.