Bend Chamber leads the effort to address a lack of child care, using a host of approaches

A series of meetings last week shed light on the very real challenges faced by both parents and providers in ensuring there's an adequate supply of quality child care in Central Oregon. The Bend Chamber of Commerce, in partnership with the U.S. Chamber of Commerce Foundation, hosted five meetings centered around child care across the region, including meetings in Madras, Prineville, Redmond, La Pine and Bend. 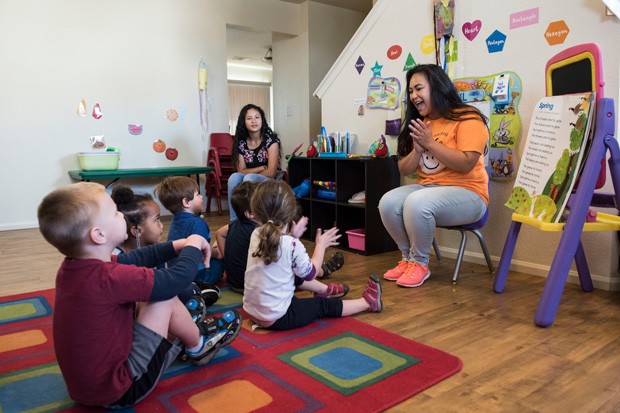 Julia Barfield, senior manager of policy and programs at the U.S. Chamber Foundation's Center for Education and Workforce, kicked off each meeting by presenting case studies and research on the positive impacts that early childhood education can have on the workforce and a local economy. Next year, the U.S. Chamber Foundation will release the results of a study that breaks down economic impacts of a lack of child care, on a state-by-state basis. According to information provided at the meeting by a representative from NeighborImpact Child Care Resources, there are 2,000 available child care slots in Bend, but 5,600 kids in need of care.

Some of the local people who attended were already acutely aware of the impacts of the shortage—as well as some of the barriers that make launching and operating a child care facility so challenging. One local child care provider explained how they've experienced losing out on quality employees, when the background checks required of providers moving to Oregon from out of state took six weeks or more—meaning that in the interim, those prospective employees had found other jobs. Another prospective provider shared her challenges in finding a location with the proper zoning. Another detailed how the costs of building or opening a business—such as System Development Charges imposed by cities and other government entities—significantly raised startup costs.

Last year, the City of Bend took aim at that problem by lowering SDCs for child care centers—but one prospective provider said it wasn't enough.

"Even though SDCs have been reduced by 70 percent, not one center has opened," said a child care provider who hopes to open her center soon, after two years of working to secure a location.

A mission of the Bend Chamber is to bring the business community together in the interest of a vital economy. Recognizing that a lack of child care had the potential to impact businesses, the Bend Chamber commissioned a survey around child care needs, releasing the results this July. Respondents included 128 employers or hiring managers, as well as over 300 employees. Of those responding, 96% of employers said it is "somewhat to very difficult" for their employees to find—and afford—child care in Central Oregon. Of the biggest areas of concern, 92% of employers said attendance was the top issue, with 57% of employers reporting impacts to productivity, and 54% reporting issues of employee retention due to child care issues. Among employees, 21% of respondents said child care takes up 50% or more of their total income; with over 20% saying they spend 25% of their income on child care.

The Bend Chamber, along with other employers, nonprofits and stakeholders, formed a Child Care Task Force in 2018—which the Chamber credits in getting SDCs lowered for new and expanding child care facilities. City Councilor Bruce Abernethy, who attended the Bend meeting Sept. 26, also described a recent City Council work session Sept. 18, which centered around lowering the barriers for child care centers to open—such as removing the need for a conditional use permit for child care centers. Abernethy said councilors were receptive to the recommendations put before them and gave clear guidance to city staff to "flesh out what this looks like," going forward, he said.

Bend Chamber CEO Katy Brooks described how the task force's next step is to fundraise for a child care accelerator position in Bend. That person would be tasked with helping providers access information and resources, identifying public and private partners to help lower the costs of care, and other tasks related to child care in Central Oregon. The task force hopes to have someone in the child care accelerator position by November, Brooks said.

Editor's note: The second paragraph of this article has been changed from the print version to reflect the full name of the U.S. Chamber Foundation—which was shortened, in the original version, to U.S. Chamber. The two are separate entities. We regret the oversight.