The ebb and flow of local populations of the mariposa lily

Bill Kuhn, who lives among the sagebrush, juniper and mariposa lilies, is somewhat like me: a worrywart. Every time he and I sit by the fire we get to chinwaggin' about what's going to happen to the juniper, sagebrush and wildflowers—that are the love of our lives—after we go out among the stars. 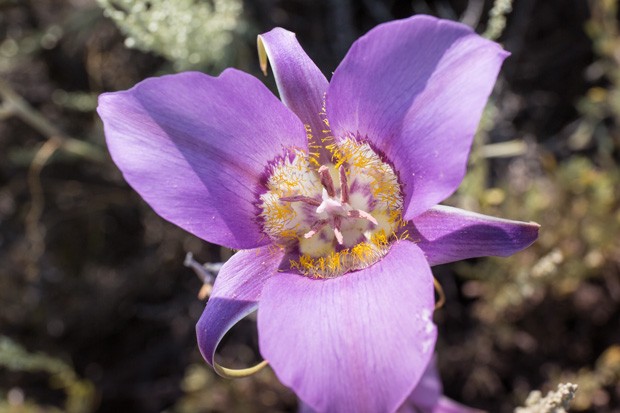 Kuhn's also a counter of things, if you will. It's a habit he cultivated when he was a student starting school. He'd rather run than walk, and while doing so in those young school years he'd count the number of steps it took to run to school.

He's still a runner and counter today. Living in the Tumalo Winter Range (for deer), he noticed—and then began counting—the exquisitely beautiful mariposa lilies along his running path, worrying about them.

Unfortunately, we both see too many humans who haven't evolved enough to see the land we live on as we both wish they would. We bump into those horseback riders who believe this land is theirs and they can go wherever and whenever they like any time they feel like it—the same way so many of the wheeled recreationalists and shooters do.

One of our fellow human beings that both Bill and I enjoy and try to emulate is our beloved old "lover of the land," Aldo Leopold. All his professional life he tried to bring about a respectful way for humans to think about the land we live on.

But the growth of human society seems to have outrun Leopold's wishes, and those who can't/don't/won't/don't see the land the way he did—unfortunately— are overpowering those who do in destructive ways.

He sat down and wrote methods for a scientific look at this beautiful wildflower to better understand why it lives the way it does and how to help it continue doing so. tweet this

Leopold stated the basic principle of his land ethic as: "A thing is right when it tends to preserve the integrity, stability and beauty of the biotic community. It is wrong when it tends otherwise." Which changes the role of Homo sapiens from conquerors of the land to plain members and citizens of it, cooperating with the laws of nature. Leopold's 1949 book, "A Sand County Almanac," should be in the middle of everyone's kitchen table; it holds the keys to our survival as a species.

Back to Kuhn. He sat down and wrote methods for a scientific look at this beautiful wildflower to better understand why it lives the way it does and how to help it continue doing so. He's shared his long love affair with the mariposas on the 33.21-acre wildlife parcel that he and his late wife, Leigh, protected and monitored over the 30+ years they lived there.

His model for wildflower research can be duplicated and applied to anything you may want to take a closer look at in your backyard: favorite fishing hole, deer-hunting area, bird-watching spot or whatever.

In his words, here's what he did.

"My late wife, Leigh, was a spotted owl caller during the early 1990s. Her training included the concept of setting transects and quadrants, two ecological tools that allow us to quantify the relative abundance of different organisms within a geographical area.

"Leigh helped me set the protocols for counting the mariposa lilies each year. Rules included to not stray more than a few feet from the line so I wouldn't over-count the lilies; only those within direct eyesight along the transect would be counted. I also compared the data with moisture not just from snow melt and rain, but also whether Las Niña or El Niño might have been a factor."

Kuhn went on to say, "2019 has been an incredible year. Late winter snowfall followed by a few hailstorms, then gentle rain allowed for an explosion of mariposa lilies. This year's count came in at 4,232 individual plants! The numbers are so high I've been able to see two significant variations. One is a pigmy sized blossom, the second is an albino (all white) variety with a yellow base."

Now he and his helper, Paula Latasa-Kinzer, are using all their skills, plus the details they have been gathering through the internet and the help of botanist pals, to get a strong understanding of the mariposa lily.

To date, these eager-beaver Citizen Scientists have discovered not only the quantity and quality of the mariposa lilies on Kuhn's acreage, but they're also watching a few of the flowers making seeds, and have learned the bulbs can go to sleep during periods of dry weather and hold on for at least four years during tough times.

If you, too, want to join in these Citizen Scientist opportunities, contact William Kuhn: William@RiskFactor.com.

Then take a look at Peck's milkvetch; it needs some help.