October 24, 2018
comment
The Deschutes County Commission has implemented a series of changes to its rules around growing recreational marijuana—and declared an "emergency" to make sure the rules go into effect sooner than the typical 90 days.

The rules, which commissioners voted on Wednesday, include new regulations around odor, noise, lighting and reporting, among other changes. 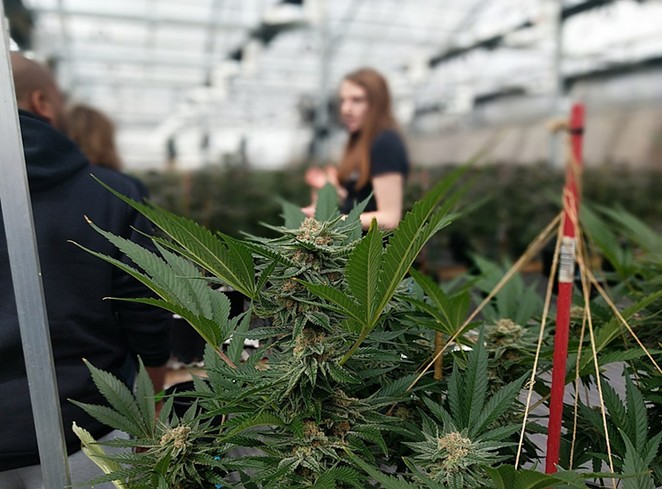 Although a true emergency would put the rules into effect immediately, the commissioners voted to implement the changes on 30 days, which is Nov. 23 — meaning applications under current regulations need to be in by Nov. 21 due to the holiday. Any application received on Nov. 26 or later will be subject the new rules. The reasoning they gave for the emergency was to have it implemented by the legislative session.

Under the amendments, yard setbacks would go from 100 to 150 feet; off-site dwellings would see a setback change from 300 feet to 400 feet; and setbacks from federal public lands are now 300 feet. A property line would now also need to be at least 1,320 feet from buildings like daycares, schools, or many parks. The changes also remove the MUA-10 zone from the rules.

Although current growers will not be subject to the new rules, they may be affected if they plan to apply for a new permit on their property — for remodeling or expanding.

According to Tanya Saltzman, associate planner with Deschutes County, marijuana operations will go through regular land use approvals if the changes are not related to "the marijuana side of things" — like adding a deck.

However, "any expansion related to marijuana would be subject to the new rules—a new production building, for example, would have to go by the new setback standards," she said. "Where it gets more complicated is if someone were to add onto an existing building, for example to add more production area, things like the odor control system would be subject to the new regulations, since generally such systems apply to an entire building and it would be difficult to separate the old from new in order to mitigate odor within the same structure."

For Lindsey Pate, owner of Glass House Grown and a representative of the advocacy group, Celebrate Cannabis, the code changes aren't just restricting business for cannabis growers in the state, they are sending a very strong message that the community is not welcome in Deschutes County.

"As a cannabis community, the code changes go against everything we have been working for. We are talking about this overarching process of normalizing," she said. "So to get these code changes today on an emergency vote with 30 days, it sends a little bit of a message that the transparent cannabis community is not being supported and we start to lose sight of this common vision of normalizing. And that is felt by our community, certainly."

Before declaring the changes an emergency, the three commissioners discussed what an “emergency” means. Commissioner Tony DeBone was the one who questioned whether it was not a true emergency. He wanted it on the record that, "This is for the political reasons of legislative session. It's a little different than the health, safety and stabilization of our community; it is very much political."

However, DeBone did end up voting for the emergency, reasoning it would be easier to have in place by the beginning of the legislative session.

Pate said growers within the county are feeling like outsiders in that they are jumping through more hoops than other industries. Although cannabis has had different rates of acceptance, even in areas where it is legal, the cannabis community feels it has been especially difficult in Deschutes County.

"You can look in many of our other counties that they were quick to educate themselves and quick to adopt workable regulations, and that is part of normalizing," she said. "That is where we as a community or we as a county have an opportunity to say that 'our state has voted this in. Our voters are recognizing this as a right that if you are 21 or over you have.' And to restrict regulation at the heart of the industry, at the farming of it, to restrict that as a community is a huge step back."

Commissioners Tammy Baney and Phil Henderson both reasoned that an emergency declaration was necessary simply because they have been working on the changes for an extended period of time. Baney added that although she believes the changes strike a good balance that are "essentially good neighbor practices."

And although the commissioners repeatedly said the changes were not a big deal, DeBone did seem to verify that they know how much the rule changes will affect the possibility of new applications — leaving most of the opportunity for existing permit-holders and city farms.