Some notable quotes from the recent Chamber event 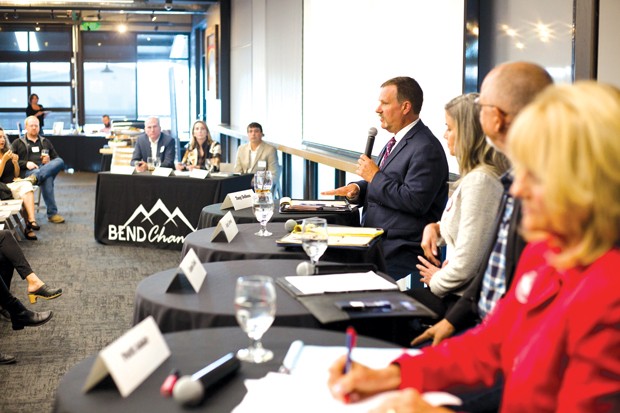 Below are quotes—truncated for space—on some of the issues candidates discussed.

On working with the City of Bend to effect change in the state legislature, allowing unproductive farm land to be developed:

Amy Lowes: "Personally, I'd like to see us in the city of Bend identify centers of urban density rather than create a situation where we might see some sprawl."

James Cook: "As far as the non-resource lands, I think we do need some flexibility, but I don't think that it's going to be wise to go and ask for that flexibility unless we've worked together with all the stakeholders, which will include our farmers, our environmentalists, our builders... we need to put them all at the table and come up with a proposal we can take to Salem and get some help."

Patti Adair: "I think that the City and the county commissioners have been addressing this issue quite seriously and I think that should definitely continue. And as far as changing our EFUs (exclusive farm use), which is extensive farm into multiple agricultural uses—MUAs, excuse me—that is maybe a really good possibility to look at the land around the city and work with the legislature. We have to work with them."

Tony DeBone: "What happened in the late '70s and the early '80s when people were really implementing statewide land use, there became a catch-all set of properties, because it was a really decisive, contentious situation at one point, and the catch-all ended up being EFU. It wasn't intended to be bad or wrong, but it is time to have that discussion and support Bend in a 50-year vision on that, where they can go in urban expansion."

On the possibility of adjustments to marijuana regulations in the county:

James Cook: "We're already the strictest regulations in the state of Oregon. I think we're sitting on the borderline of actually getting pushback if we try to expand those regulations. Quite frankly I don't think the board is going to accept all those expansions; they've basically thrown out basically everything that's under consideration. But I think if we did go with all of them, we'd either lose our right to regulate at the state level or we're going to be spending a lot of time at the Land Use Board of Appeals or in the courts. And I'd rather not spend my first two or three or four years as a commissioner trying to walk back some of the overreach that might happen."

Patti Adair: "In Deschutes County some residents have been surrounded by marijuana grows on all three sides—that means that their property no longer has a value. I do realize that we have to work together with the growers but the regulations that the county planning staff put up the other day, I feel are something that should be seriously considered."

Tony DeBone: "So the facts are, the state said it's a crop to be grown on farmland. We asked for a reasonable time, place and manner opportunity; we put those in place, and I absolutely committed to one year later, let's look at that. Right now we have kind of a smorgasbord of ideas in the rule changes and it's already been mentioned—I don't support everything that's in there, and we're going to have a negotiation in the end here that we have to work that out."

Amy Lowes: "In fact, yesterday the Farm Bureau released a statement and they said that the commissioners exceeded the scope of reasonable regulation and set a dangerous precedent for all agriculture. They said it's painfully unreasonable to require odor and noise abatement plans and extensive engineering to protect neighbors from a farm crop in a farm zone. So I think we need to be realistic about it, I think we need to look at the science behind it and we need to support this and distribute this. It contributes to our diverse economy."