April 19, 2020
7 comments
Inmates at the Deschutes County Sheriff's Office Adult Jail share everything: small dormitories, cramped dining spaces, showers and bathrooms. They use the same phone to connect with loved ones and touch the same door knobs as they move through the facility. This makes inmates and prison staff especially vulnerable to the spread of COVID-19.

It’s already happening in other places around the U.S.: As of the beginning of April 2, 231 inmates and 223 staff members were infected with the coronavirus at the Rikers Island jail complex in New York, according to Slate. 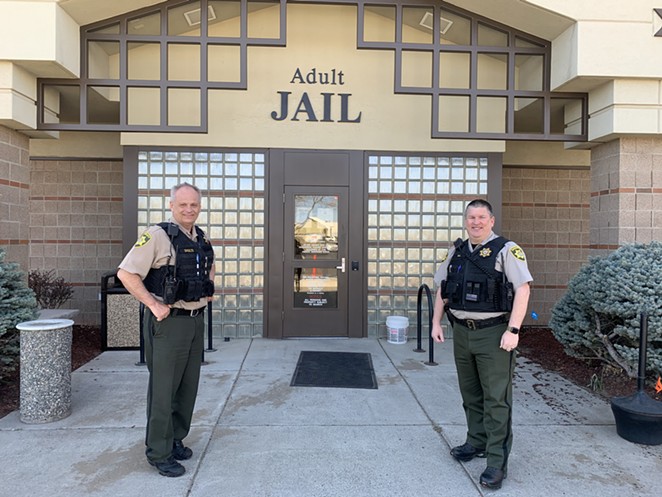 Here in Oregon, more than a dozen staff and inmates have been diagnosed within the state prison system, according to The Oregonian. Currently, there’s no statewide testing mandate or strict coronavirus-specific protocols within jails and prisons, but Gov. Kate Brown has said she's considering releasing some inmates early.

On April 5, seven Oregon prisoners filed a class action law suit against Brown and the Oregon Department of Corrections for subjecting prisoners to cruel and unusual punishment, alleged they did not adequately protecting prisoners from an outbreak of COVID-19, according to Oregon Public Broadcasting.


The last thing we want is this virus to go through our system. We’re a close-knit population. - Captain Michael Shults, Deschutes Co. Adult Jail tweet this

Meanwhile, inmates at a minimum-security prison in North Portland rioted last week because the facility didn’t provide soap, cleaning supplies and masks, according to the Portland Mercury.

Over the last week, no new major outbreaks were reported inside correctional facilities in Oregon

Prisoners and inmates have made some headway in Oregon. Inmates in some state prisons began sewing cloth masks as part of their 40-hour-a-week work requirement and will distribute them to other prisons and jails throughout the state this week.

At the Deschutes County Adult Jail, the jail managers may make wearing a mask mandatory. Inside the jail, inmates and staff work around the clock to sanitize surfaces and clean communal areas, according to Captain Michael Shults, who manages the jail along with Sheriff Shane Nelson and Lieutenant Michael Gill. The deputies also limit movement inside the jail and require social distancing outside and in their dining units.

As of today, there’s no known cases of COVID-19 at DCAJ. That could all change very quickly.

“The last thing we want is this virus to go through our system,” Shults said. “We’re a close-knit population in the jail system... If we were to get it, and we could at any time, we need the ability to move people into individual cells and provide them with medical care.”

But communal living and shared space is part of an inmate’s life. Isolating every inmate during an outbreak is an almost impossible task, especially because DCAJ usually runs at capacity.

Two months ago, the jail accommodated an average of 300 inmates at any given time. About 20 new inmates entered the jail every day, and 20 people left, according to Gill. But that all changed when COVID-19 hit Oregon. Today, the Deschutes County Adult Jail has only about 150 inmates.

Shults and Gill worked with parole and probation officers, public defenders, and local judges to examine the charges brought against the inmates they had in custody.

“We looked at the whole population, and found out who was close to being released, and who was the least likely to return to jail [if released early],” Shults said. “We excluded felonies and person-to-person crimes, and other things that may present a danger to the public. We didn’t release DUI second offenders, for example, or those with assault charges and domestic violence.”


“We also worked with law enforcement to see if there were some cases where they could manage and intervene before actually sending people to jail,” Shults said. “This could include things like disorderly conduct, driving with a suspended license or petty theft.”

According to these deputies, some people who were arrested over the last few week weeks received a citation and a court date, instead of going straight to jail. The Oregon Chief Justice delayed most court proceedings until June 1.

“When we got word of this, we knew this was going to be one of the hardest things for our staff members to deal with,” Shults said. “Our law enforcement officers, the Bend and Redmond PD [police department], they’re all taking this very seriously, and know the consequences if they bring someone sick into the jail.”

While the deputies work to maintain social distancing and sanitization supplies for the people inside the jail—and say the inmates appreciate it—there’s some major downsides to the coronavirus scare and lockdown. Inmates no longer have anyone coming in from the outside that is not staff: this includes their attorneys and people teaching classes and yoga programs.

“We’ve made technology provisions… inmates can meet with attorneys over the phone or video, and have visits with doctors, psychologists,” Shults said.


Both Shults and Gill participate in weekly meetings with the Oregon State Sheriff’s Association, a group that formed 100 years ago to keep each jail accountable to the same standards.

“We get together with jail managers around the state for several hours to make sure we’re all falling in line with best practices,” Shults said. “Our COVID plan is a living document, we update it every week… I’m constantly reading the latest updates on this virus and its effect on the jail system from when I wake up in the morning, until I go to bed at night.”

Next week, face coverings are on the agenda. The State may issue guidelines that require masks inside all prisons and jails within Oregon. The DCAJ may get a shipment of cloth masks made by inmates in state prisons.

On the state level, Gov. Kate Brown was considering the early release of about 3,000 inmates, or about 22% of the total state prison population. (Gov. Jay Inslee announced April 13 that Washington State would release 950 inmates.) But Brown told OPB she is concerned that many inmates would then be left without medical care and a place to live. Currently, she has a list of about 300 non-violent offenders who have approved homes and are within eight weeks of being released.