An Inspiring Story of Connection 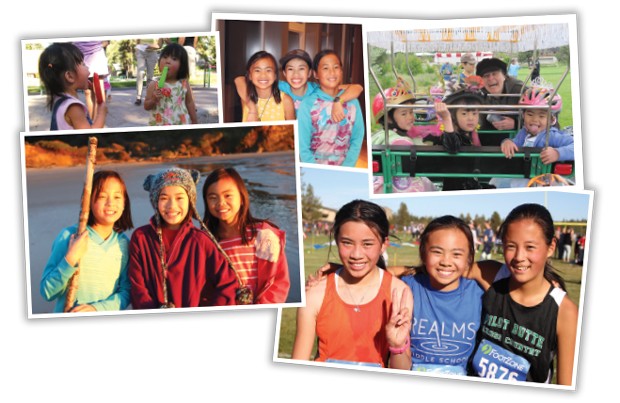 Over a decade ago, three Bend families were drawn together by the common heritages of their young daughters, who were toddlers at the time. Since then, this group has woven a web of support and tradition while creating their own definition of family.

Meet Ava, Emily and Hai Xing, now in their early teens. Each is unique in their dreams, talents and personalities, but they have so much in common. All three are athletic and artistic; they are thoughtful and poised. They giggle over funny stories, they all love bubble tea, and they get each other's jokes. They also share a similar background story: each of the girls is an only child, adopted at a young age from an Asian country by parents who live in Bend.

Out of everything they have in common, one quality stands out: the girls share an unwavering confidence that they are family, somewhere between sisters and cousins, and they'll be there for each other all their lives.

How did this connection come to be? What was the recipe for creating this tribe and nurturing the bonds between the girls?

Jill and Paul Dewey married later in life, when both were in their 40s. They wanted a family and began the process of adopting a child from China in 2006. Over two years went by before they finally got to meet little 13-month-old Ava, who promptly stole their hearts. "Ava had been living with a wonderful foster family who gave her a lot of love," said Jill. "We felt so incredibly lucky to finally have her in our family."

Years later, the Deweys reconnected with the foster family during a trip to China, when Ava was in 3rd grade. "I went back to see the city I was adopted from, and I got to meet my foster family—that was cool," said Ava. "And riding the Skytram to the Great Wall was pretty exciting," she added.

When Ava was just two years old, Jill had a chance meeting at a playground. She noticed another mom with a little girl who looked Asian, and she struck up a conversation. "Well, that mom turned out to be Joanie, with [her daughter] Emily, and we started having playdates with the girls, and through them we met the Lewises, and the friendship took off from there," said Jill. Together they found ways to celebrate the girls' birth cultures. "Bend is just not a very diverse place, and there are just a few kids of Asian heritage. But mostly, they just have a lot of fun together," she added. 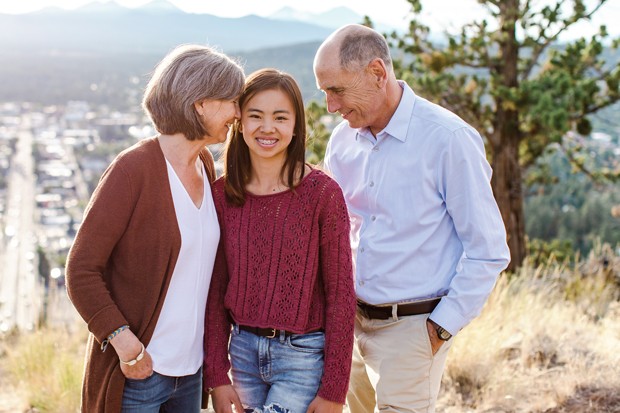 For Jill and Paul, these friendships have helped fill in their own family web. "All of our relatives live back east, so it's just the three of us here," said Jill. Her advice to other parents? "Just reach out. Seek out opportunities to embed your family in the culture your child came from. Connect with people of all ages, not just kids—that's what makes a community."

Ava, now 13 years old, is in the 8th grade at REALMS Middle School, and loves aerial silks acrobatics. Emily and Hai Xing describe their friend Ava as the most hardworking and curious of the three of them. Ava's plans for the future include becoming an architect. "Whatever she decides to do, she'll do it really well," said Emily.

When Joanie Krehbiel decided to bring a child into her life, she chose an adoption agency that worked with orphanages in Vietnam. In April of 2007, Joanie traveled to Vietnam to adopt her daughter, Emily, and brought her home to Bend when she was nine months old.

"Adopting a child can be far more cumbersome than having one biologically! Having people in your life who understand what it's all about can be super helpful," said Joanie.

Joanie found a good friend in Robin Lewis, whom she met through a master's swim program. Their friendship grew as they both went through the adoption process and continued later as they raised their young daughters in Bend. Once Joanie met Jill at the playground, the three families felt they'd found their community, along with the addition of friend, Patrick Howard, who is like an uncle to Ava, Emily and Hai Xing. 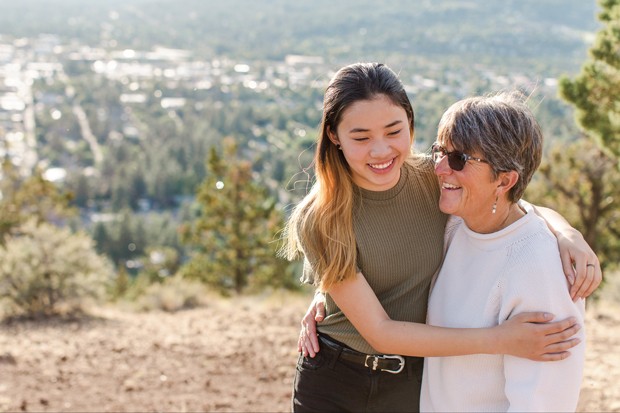 "Pat was so supportive of Emily's adoption, and now he really brings all of us together," said Joanie. The three families spend Thanksgivings with Howard on the coast and gather regularly at his home. Joanie views the girls' close-as-cousins relationship to be less about their common culture, and more about the fact that they've shared so many fun experiences and traditions together—many of them at Howard's house.

"It's so good for them as kids to have a sibling sort of relationship, and it's really good for us as parents, too," said Joanie.

Emily, now age 13, values her Vietnamese heritage, but it's not as big a priority as her current passions—especially her artwork. "The culture is interesting to me, but I like to stay in the present and not in the past," she explained. Emily is in 8th grade at Westside Village school. Ava and Hai Xing love her creative spirit and artistic flair, and the way she incorporates them into her graphic drawings. Down the road, Emily plans to bring fresh new stories to animated films. 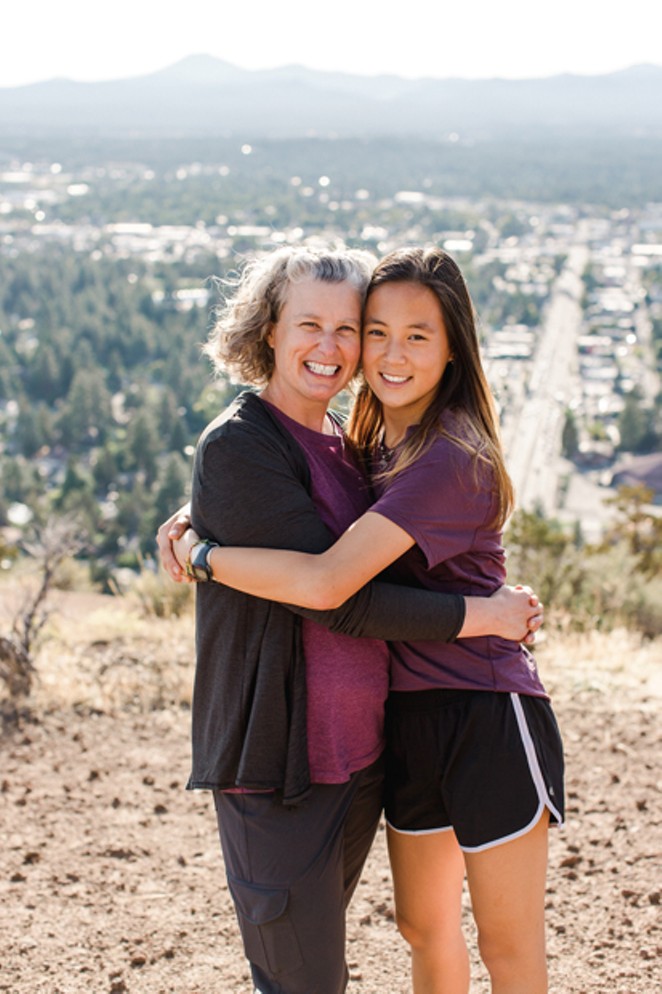 When Robin and Tom Lewis traveled to China in 2008 to adopt their daughter Hai Xing, it was truly a family affair. Robin's mom, sister and niece came along on the trip, and were there to welcome Hai Xing into the family. They also traveled to Hai Xing's birth city and met her foster nanny and preschool teacher. Hai Xing was almost three years old at the time—they arrived back in Bend just in time to celebrate her third birthday.

The Lewis' have stayed connected to Chinese culture in several ways. They've hosted a teacher from China for a full school year, and they visited that teacher and her family in China when Hai Xing was nine years old. During that trip, they went back to the orphanage where Hai Xing lived. Hai Xing's face lit up as she described her experience in China. "It was really exotic and different. I tried weird foods like chicken feet. Actually, they were pretty good! And my foster nanny recognized me right away," she said.

"For me, the culture is important. We should never forget about that connection," said Hai Xing. One year for the Chinese New Year celebration, Hai Xing related, their moms made a dragon head with a tail large enough to fit all three girls inside. They marched around, stomping on bubble wrap so it sounded like fireworks.

Robin recognizes how important it is that the girls have each other. "As only children they need those friendships where they're not always together, but they always have each other's backs. And it's the same for the parents." Forging relationships with whole families takes some effort, but Robin believes that when it benefits the child, it's good for everyone. "Instill the importance of keeping your friendships strong. Learning how to do that is what keeps kids grounded," said Robin.

"And Patrick—we are so lucky to have him, too," said Robin. "He dotes on the girls like crazy, but he also gives them responsibilities, like helping in the kitchen," she added. One year when Robin and Tom had to miss celebrating Hai Xing's adoption day, Howard stepped in to take all the girls to Sun Mountain Fun Center. "He's like the best uncle ever," said Hai Xing.

Hai Xing started high school this year at Mountain View, where she is studying Chinese and Spanish, and running with the cross-country team. Ava and Emily agree she is a natural leader, and a creative thinker. Hai Xing sees her future self working in something related to urban planning. "I want to make neighborhoods better places to live, and more beautiful," she explained.

Being an old friend of the Krehbiels, Patrick Howard naturally embraced the Lewis and Dewey families when he moved to Bend. He planned his new Bend home to include a kitchen built for entertaining friends, with glassware labeled with the first names of everyone in this extended family and a downstairs room for the three girls to play games, build forts, and just be kids.

"We have a lot of dinners here, and the rule is that the girls always get to go first," said Howard. "I want them to know how much they are loved, and I think it's the little traditions that send that message."

"We work pretty hard to schedule gatherings so that all three girls and their parents can come. Being all together is the key, I think," said Howard.

"I never had kids of my own, and it means a lot to me to be part of their lives," said Howard. "It's true I can get a little elaborate with the meals, but it's worth it, because we've created really fun memories over the years," he added.

The recipe for building family

For this group, the recipe for family seems to be one part reaching out to start conversations, one part gatherings with a mix of generations and one part nurturing fun activities that make memories. There's intention behind their choices to stay connected to their kids' heritages and to create new traditions here at home.

All of this ends up with girls, somewhere between cousins and sisters, who can without a moment's hesitation agree on their own definitions of family. In between sips of bubble tea, they sum it up in a few words: Love, trust and always there for each other.

The girls seem wise beyond their years when they describe how their bond is different from other friends at school or on sports teams. Ava and Hai Xing nodded as Emily explained, "We've grown up together and our parents are always together. Friends at school come and go, maybe they won't be in your class next year. But we know we'll be friends forever."