For some local creatives, making art is a lucrative side business... for now

Finding a passion can sometimes lead to finding a career—if you're lucky. It seems like the American dream: follow your bliss and the rest will follow.

Lauren Stewart, who works as a prep cook at Spork, has felt that exact magic since moving to Bend from Virginia three years ago with her husband. While she loved Southwest-inspired silver jewelry, it was a love she couldn't afford. Her husband suggested she just make it for herself, and while that idea seemed wild, she gave it try. By watching YouTube videos and asking online communities of silversmiths, Stewart began making jewelry in her kitchen. She gave her work to friends and family and was overjoyed when people inquired about purchasing her work. 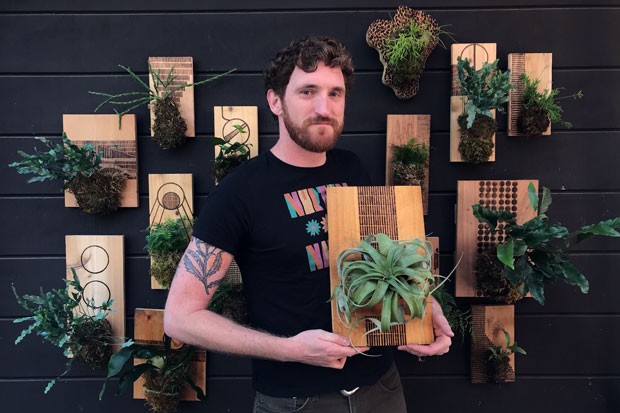 Almost three years later, Stewart has cut down her time at Spork and now has a studio in Mud Lake studios.

James Gray, the market director for Central Oregon Locavore, has had a similar experience. After moving to Central Oregon seven years ago, Gray found that his love of growing things turned to house plants.

"Not a lot grows here, but houseplants thrive because of the sun," shared Gray. Because he didn't have any more space to put plants on the floors, he moved them to the walls. The result are plants mounted on wooden boards with hand-burned, modern, vintage-inspired graphic designs. People love them—so much so, that Gray has had a hard time keeping up.

"Each one I do by hand, so it is really exciting to see them in people's houses and to get people interested in what I do—it is such a joyful experience. The issue is time. With working full time, I have to do it when I am not working—that includes weekends and evenings and early mornings and late nights, which makes it hard to keep up with demand," shared Gray.

Stewart raises the same concerns. "I have to practice a lot more self-discipline, because I don't have regular hours to be there or someone who is going to call me if I don't go in. I have to make my own priority lists and make time for my own creative processes."

While both Gray and Stewart expressed interest in growing their "side hustles" into an actual full-time business, both see the benefits of growing slowly. The safety of a salary means they can put the money the business earns right back into the business, without worrying about where bill money is coming from. Both see their art being a bigger part of their future, while also being perfectly content with where they are now. As Stewart says, "I feel like I am exactly where I need to be."