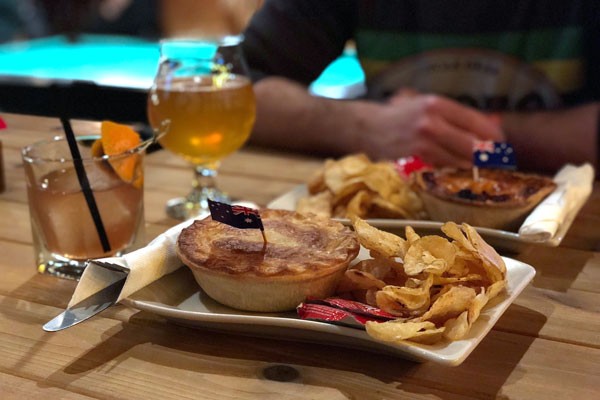 I discovered Duda's Billiards Bar while researching the businesses using Prep Bend as a commercial kitchen. Duda's Billiards Bar uses the spot to make Amy's famous homemade Aussie meat pies. I was intrigued. I've had Cornish pasties, the baked English pastry filled with minced (ground) meat and vegetables, which gained popularity in the late 18th century by miners who ate them at work because the dish was portable, easy to eat with your hands, and hearty and filling. As miners emigrated because of lack of work, the pasty made its way around the world, including Australia.

Before I could make it to Duda's, a friend, Carolyn Stokes, texted me and said, "Have you had the Australian meat pies at Duda's downtown?" I said no, but that I've wanted to. Stokes said, "it's a husband and wife team that owns the place. He is bartending and she makes the meat pies. The food is amazing and they are adorable. She's from Australia." Now, I definitely had to go.


The shortcrust pastry was flaky, soft and buttery. The ground beef filling was meaty and rich, sopped in gravy but not runny. tweet this

Located on Wall Street in downtown Bend, Duda's is a pub with pool tables and a few other games, including foosball. At the back of the place is a small bar. The Aussie pie shop menu is on the wall in several places. Americans eat hotdogs at sporting events; Australians eat meat pies—so it's fitting to find meat pies here.

My partner, Jim, started with the Mele Kalikimaka IPA from Sunriver Brewing, and I ordered an Old Fashioned Lavender from the cocktail menu. Josh Duda, who owns the bar with his father and wife, was my bartender. He made my drink using a Yarai mixing glass. It seemed quite elegant—maybe a little hipster for a pool hall, but an indication my cocktail would be made well. It was. The drink was boozy like it should be. The whiskey was the star, but I could still taste hints of the lavender bitters, making it a bit more interesting than the classic.

There are exactly eight items on Duda's food menu; two snacks and six Aussie pies. This type of menu usually means one of two things: either the food sucks and they don't have the desire or space to do better, or they stick to one thing because they've perfected it. We hoped it was the latter. Since we've never had Aussie pies, we ordered the most traditional, the classic with beef, as well as the Ned Kelly, made with the same signature beef and egg, bacon and cheddar.

Our meat pies were served with a tiny Australian flag, ketchup packets and potato chips. I ate my pie with a fork and knife, but it's traditional to eat it by hand. The shortcrust pastry was flaky, soft and buttery. The ground beef filling was meaty and rich, sopped in gravy but not runny. This Aussie pie was more flavorful than traditional Cornish pasties. The Australians use more spices, and my taste buds noticed. It's traditional to eat a meat pie with a bit of what the Australians call "tomato sauce," but what you might know more traditionally as ketchup. Even though the pie was delicious on its own, I dipped my next bite into some. The ketchup's acidity made all the flavors bloom. The condiment made complete sense.

I tried a bite of the Ned Kelly, named after Australia's most famous bushranger, an outlaw who wore a suit of bulletproof armor to his final gunfight. The Ned Kelly tasted like the breakfast version of the classic, the cheese and bacon adding a lot of smoky flavor and the cooked egg yolk making it rich.

I asked Amy Duda, the cook behind the pies, how she started making them. She told me her husband loved them, and while she was waiting for her green card, she worked to perfect them. She had her mum, back in her beachy hometown of Coffs Harbour in Australia, do some market research for her, sending Amy photos of meat pies and measurements. She researched the fillings and quickly discovered the biggest secret to authenticity was slow cooking and a bit of thick, brown, salty Vegemite, the Australian condiment made with leftover brewer's yeast, vegetables and spices. It took Josh Duda six months to talk his wife into making meat pies for the bar. They've been serving them for the past five months, selling about 70 to 100 pies a week.

If we get another cold snap—or even some winter snow, those hearty Aussie meat pies will be exactly what I crave to warm me up.