The Oscar nominees for Documentary Shorts are usually very difficult to watch. I mean, they're uniformly excellent, but the films are always extremely topical and unflinchingly brutal in their dedication to truth. At Tin Pan Theater over the last six or seven years, I've been lucky enough to watch most of the Oscar Shorts (including the Animation and Live Action ones), but I'm not sure any single short film affected me the way Skye Fitzgerald and Michael Scheuerman's "Hunger Ward" did.

"Hunger Ward" focuses on the famine in Yemen, ongoing since 2016 and beginning during the Yemini Civil War. As of 2018, more than 85,000 children have died with UNICEF calling the famine "the largest humanitarian crisis in the world." The film follows health care workers Dr. Aida Alsadeeq and Nurse Mekkia Mahdi across two hospitals as they struggle to combat child malnutrition. It's filled with stories and imagery that will stay with me for the rest of my life. 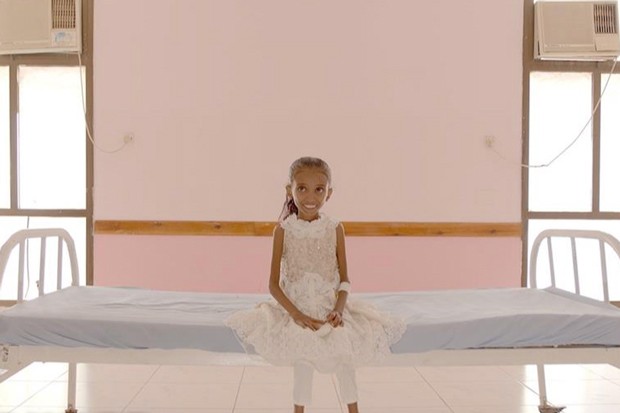 I had a chance to speak with the film's producer (and Bend local) Michael Scheuerman about the film and some of the unique challenges he faced along the way:

Source Weekly: I wanted to start by asking how you became involved with Skye Fitzgerald and making "Hunger Ward." Was film production something you were already working in as a career?

Michael Scheuerman: Film has always been my favorite art form since I was a child—deeply impacted in my youth by "Holocaust," starring Meryl Streep, "Platoon," "Wall Street," "Ghandi," and "Romero." Coming from a small town in Minnesota, I didn't think film was even possible as a career. Then when I was 23, I literally stumbled onto the set of Sydney Pollack's "Havana" while living in the Dominican Republic and was hired as Robert Redford's body stand-in for the setup of lights and camera. I was able to experience Hollywood film production first-hand, and they offered me the job for six months. I've always regretted turning them down, though, and have wanted to get back to film someday. In September 2018 I retired from 25 years in tech and decided to pursue film as an option. A month later, I attended the Bend Film Festival and met a few directors, including Skye Fitzgerald. Another director, Graham Zimmerman from Bend, told me that what I've been doing for 20+ years is exactly what a film producer does. I started helping Skye a little with social media for his last film "Lifeboat" for about four months, and then we started working as co-producers of "Hunger Ward" after that.

SW: What about the topic inspired you and made you dedicate so much of your life to the film?

MS: Yemen is facing the worst humanitarian crisis in the world, according to our partner, the U.N. In 2020, due to the war and blockade, out of a population of 30 million, 16 million are food insecure, 5 million are facing famine soon, including 2-million-plus children. The U.N.'s World Food Programme has warned this could be the worst famine in modern history. There's no other crisis that needs attention more than Yemen right now, so I've given two years to help raise awareness through the film.

SW: The access you were given seems unprecedented in regard to what the parents of the children and doctors allowed you to film. Was there something special you had to do to be allowed to film so unflinchingly?

MS: Director Skye Fitzgerald spent months before the trip building relationships in Yemen, including with Dr. Alsadeeq and Nurse Mekkia. Once Skye & Jeff Ball (director of photography) arrived at each site, they spent hours building relationships and trust with hospital staff and the families as it's extremely sensitive and intimate to film children, families and health care workers going through the trauma of childhood Severe Acute Malnutrition. Everyone you see in the film approved and actually asked to have their stories shared with the world so that people in the West can see what the U.S., U.K. and other governments are supporting.

SW: How surprised were you upon getting the Oscar nomination? Was it expected?

MS: I was quite surprised. It was a surreal moment to have the Academy honor our film and the people of Yemen with the nomination after nearly two years of hard work.

SW: What do you hope the film inspires the average viewer to do about the crisis in Yemen? Do you hope it creates action as much as it does inspire conversation and thought?

MS: The intent of the film is to immerse viewers in what the Yemeni people are experiencing and connect to the crisis emotionally and then activate action. We don't just want to inspire conversation and thought—our Yemeni-American advocacy partners want action. They, and their families back in Yemen, who experience airstrikes, hunger, disease and destroyed infrastructure from this war, are tired of words. So, we hope viewers will do what they can to help: donate to the two clinics in the film, contact their Senators & Reps and ask that U.S. and U.K. tax dollars stop supporting the Saudi-led coalition that is bombing and starving civilians—both war crimes.

SW: I personally think you have the Oscar on lock. Is that how you feel or is it hard to really put yourself in that headspace? Would it be too disappointing if you lost or is it really just an honor to be nominated?

MS: I'm not concerned about winning and didn't make the film for that reason. It's just an honor to just be nominated. The real win for me is that Yemeni peace advocates have embraced the film and are using it for the important work they have already been doing for six years. The film has been a tool for them to activate change, and we've done many global virtual events together. We hope the film has elevated the war and Yemen in popular culture to the point that average Americans and Brits are aware and want change.

SW: Have you started working on something next? Do you want to continue focusing on humanitarian issues?

MS: We have months of advocacy work left to do with our civil society partners, who have been working diligently on this issue for six years. I just want to finish out that work and then re-evaluate what's next. I definitely want to continue working on social impact films, both in the U.S. and abroad.

SW: What were some of the unique challenges you faced in producing the film? Were you able to prepare for them or did many take you by surprise?

MS: It's a miracle this film was ever made. We faced five challenges that could have stopped the project, and we sometimes had to pivot to respond and keep the project moving:

Visas - It took us eight months to get our two visas into the country for Skye and Jeff. Some journalists have waited over two years to get access because the Saudis shut down who gets in to tell stories. It took Skye two trips to the Yemeni Embassy in D.C., and once the visas arrived 10 days before departure, there was only one. We had to rush to get them to issue the second. Our team was the first filmmakers allowed into the north of the country by the Houthis in six months as you need separate visas for both north and south.

Funding - Our first funder, Ryot Films, closed down at the end of 2019, but they fulfilled their funding commitment beforehand. Then, after COVID struck, our main funder, Vulcan Productions, founded by Microsoft co-founder Paul Allen, announced they were shutting down at the end of 2020 after 23 years and over 100 films. Vulcan were excellent production partners, though, and fully supported the project before they closed down.

Solemeini killing - An hour or so after Skye and Jeff took off from PDX on their journey to Yemen in early Janunary 2020, Trump killed Iranian General Qassem Soleimani in Iraq. I feared it may destabilize the region and make it too dangerous for them to enter Yemen, especially the north as Iran provides support for the Houthis who control the north and 80% of the population. The danger to our crew didn't materialize, however, and they entered with no issues.

Detainment - Skye and Jeff were detained by a warlord at a checkpoint when they traveled outside of Aden in the south. It's a long story, but they were eventually released six hours later via the work of our Yemeni fixer/field producer. He's a renowned journalist in the south and is used by CNN, BBC, NYT, etc., when their countries cover Yemen, and he was arrested at the same checkpoint eight months later working with a French crew (not related to our project) and then imprisoned and tortured in a secret prison for six months. Skye led the global effort for his release, and he was finally freed over a month ago.

COVID 19 - Just after the team returned to the U.S., COVID-19 struck and Yemen was shut down again. In hindsight, there was only a narrow six-week window to shoot the film, and we were fortunate that our visas and production fell within that window.

SW: Anything you would like to add? How can someone who wants to get involved get involved right this second?

MS: Please go to our website (hungerward.org/getinvolved) to sign up and follow our efforts, donate to the clinics in the film, and/or get involved with our three advocacy partners: the Yemen Relief & Reconstruction Foundation, the Yemeni Alliance Committee, and the Friends Committee on National Legislation. FCNL is the top lobbyist for peace on Capitol Hill, and you can click a button on our site that takes you right to FCNL's latest action for Yemen, and then it's just a click to email your Senators and Reps on Yemen.

The other challenge we faced is getting the film out to the world during a pandemic. We couldn't follow a normal distribution plan, but we successfully pivoted and held global virtual screening events. We had no idea that these would be successful, especially after technical challenges on our first few events. However, a number of our events have had 500-750 registrants from 30+ countries per event. Our event with the 2020 Nobel Peace Laureate U.N. World Food Programme a week ago from the Nobel Peace Center in Oslo, Norway, had people registered from over 60 countries. We've had events hosted by the Nobel Peace Center, the U.S. Institute of Peace in D.C., the Museum of Tolerance in L.A., the Friends Committee on National Legislation, the World Affairs Councils of America & Charlotte, the Keough School of Global Affairs at the University of Notre Dame in D.C., YRRF, YAC, and others.