Crisis Shows Us Who Our Leaders Are | The Source Weekly - Bend, Oregon

Crisis Shows Us Who Our Leaders Are

Now—not more than ever but on par with any time in the past—who we select as leaders at all levels—municipal, county, state and federal—does matter.

Between climate-change calamities, coronavirus and ongoing gun violence like the case we saw in Bend last week, we are in a world where we confront crisis on the regular. Perhaps, in the before-times, before we faced down a global pandemic, it was more palatable to see our elected leaders misstep or remain absent when a community crisis cropped up. But with the many crises we've faced in the years since the advent of COVID-19, we've all become more attuned to what we need to hear from leadership and what it looks like when a community lacks leaders willing to stand up and quell our fears or share difficult and important moments. 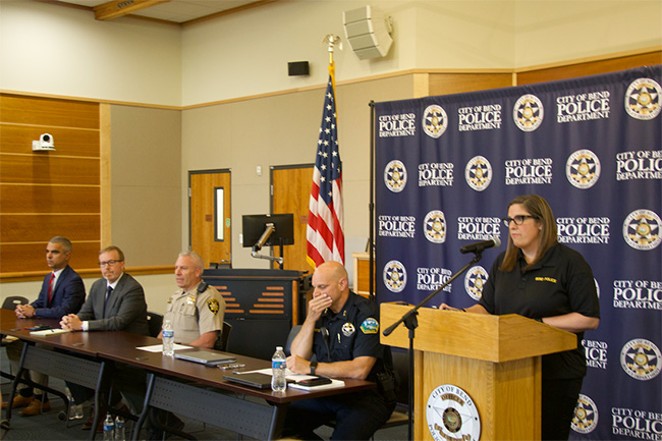 We don't always think about it in "normal times," but during a crisis, the character of our community leaders is revealed. It is during these tough times that we fully appreciate the importance of character and a moral compass... and at its most basic, the value of clear communication.

At the beginning of a crisis, whether we like it or not, social media is bound to do its game of "telephone," spreading rumor and speculation like the fastest of wildfires. In the initial hours after the Aug. 28 shooting at Safeway, this was certainly the case. Social media chatter included talk of multiple shooters, of multiple locations of shootings, of conspiracies and casualties that greatly overstated the actual death toll in the grocery store that Sunday night. Living alongside the fear and uncertainty of social media on that night was a terrifying experience.

And that's where so many of us would have been left that night, were it not for swift action on the part of local leaders including Mayor Pro Tem Anthony Broadman and Police Chief Mike Krantz. Within several hours of the shootings, city leaders including the two named above were staging a press conference to share as many details as they could. Within about 12 hours, Broadman had crafted a statement and had it sent out to the public. Within about that same amount of time, county and city leaders had set up a location for trauma support.

We don't want to overstate the case and make it sound like seeing leaders do their jobs as expected is some modern marvel—but at the same time, it shouldn't be taken for granted.

A March 2020 article from the British Broadcasting Corporation outlined how important messaging can be during a crisis, citing the work of University of Leiden crisis management researcher Arjen Boin:

"Despite modern politics' well-known focus on press relations, Boin suspects that, in the heat of the moment, many leaders still don't appreciate just how important the messaging can be during times of crisis, particularly regarding consistency and openness. 'I think that leaders sometimes underestimate the effect of their own words, especially the [effects of] things they don't say as well as the things they do say,' he says."

Crisis management typically has two parts: The initial response, and then the "thinking and learning" phase, where people are tasked with analyzing what happened, how to prevent something similar in the future and how to do better next time. Between the rapid law enforcement response to the shooting and the rapid communications in the hours following, it appears local leaders made the grade on the first part.

If what we hope for in part two is to see gun violence decrease and to see people's mental health concerns identified and treated sooner, then we must look further outward than just the Bend City Council and local police, as big-ticket items like changing gun laws or expanding access to mental health care lie not necessarily in the lap of local politicians but in those at the state and federal level.

With that, then, you can imagine what we'll say next: An election is coming.

Now—not more than ever but on par with any time in the past—who we select as leaders at all levels—municipal, county, state and federal—does matter. We may not be able to measure character and moral compass with a simple endorsement interview, but it's the place where we begin to know our prospective leaders and to assess their readiness for the hard work ahead. As we move into the next two months and our many interviews with local political hopefuls, you can bet this will be on our minds.