Pizza: an American tradition. Well, it is now, but once upon a time it was mostly eaten by homesick Italian immigrants who had left their impoverished homeland to start a new life in the United States. More than four million Italians came through Ellis Island between 1880 and the early 1920s.

The first pizzeria in the country opened in 1905 in Manhattan’s Little Italy. Lombardi’s, credited with developing New York-Style pizza, is still operating, serving their smoky-crusted coal oven baked pies. They’re one of over 70,000 pizzerias in the U.S., according to the U.S. Department of Agriculture. Americans consume three billion pizzas a year. 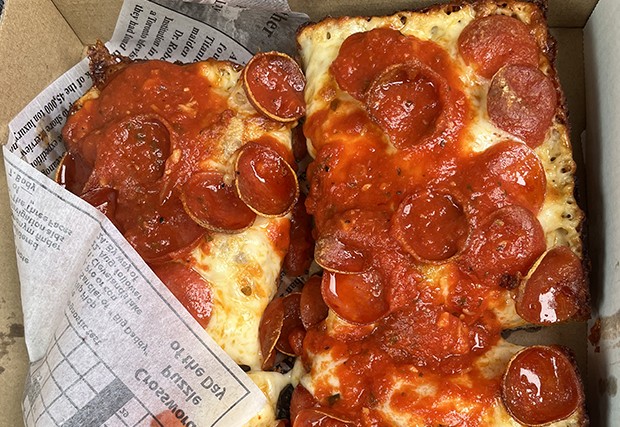 While New York-style appears to have been the first type of pizza in the country; in the years since, many other pizza styles have evolved. There’s Chicago Deep-Dish, Californian, St. Louis, Greek, Neapolitan and several others including Detroit-style, which is the style served up at Abe Capanna’s Detroit Pan Pizza + Italian cart at Crosscut - Warming Hut No. 5 in Bend’s Old Mill District near the Box Factory.


Confession time first, though. I’m not your typical pizza lover; I’m picky about pizza. I typically prefer thin, crispy crust, not too many toppings, easy on the cheese and sauce that isn’t too tomatoey. I was not expecting to like Detroit-style pizza, which is a thicker crust topped with lots of cheese. That was, until I had a bite of an Abe Capanna’s slice while having one of my favorite sours at Crosscut on a recent Friday afternoon.

Detroit-style pizza originated in Detroit back in the 1940s. Stories vary about the exact origin of the original recipe, but the dough was focaccia-like and was baked in blue steel pans, which were actually pans made to hold small parts or catch drips in the automotive industry. So while the crust is thicker, it’s also crispy on the outside and chewy on the inside, which sets it apart from other thick crust styles.

The pans used are rectangular and the pizza is topped with a heaping mix of cheeses that extends all the way to the edges, which allow the cheese to caramelize against the high-sided heavyweight pan. The crispy, caramelized, cheesy edge is called frico, which means burnt cheese in Italian.

Back to Abe Capanna’s now. The cart refers to itself as a retro neighborhood pizza joint paying homage to the tradition of Detroit-style pizza. Their red sauce is homemade and their dough is made right in their cart daily. The pizzas are baked in authentic blue steel pans in an old school gas deck oven.


I like to eat the crunchy edges first before diving into the rest of the square. tweet this

Their menu includes a variety of specialty pies, from The Janimal with four meats and red sauce to the Something About Olivia with prosciutto, pears, mozzarella, arugula and balsamic, to The Franklin with chicken, gouda and smokey BBQ sauce. You can also choose your own toppings to customize your pie. There are also meatballs, hero sandwiches, a salad and strawberry shortcake on the menu. There’s a choice of two sizes of pizza, the 8” x 10” which is four square slices to feed up to two people, or the 10” x 14” which is eight squares that feeds up to four.

I’ve tried several of the specialty pizzas and the plain cheese pizza, which is absolutely delicious, but my favorite is straight-up pepperoni. Pepperoni, lots of cheese, yummy homemade sauce and that wonderful crispy, caramelized cheesy crust. I like to eat the crunchy edges first before diving into the rest of the square.

While it is a thicker crust, it’s light and airy and it doesn’t make you overly full like some thick pizza doughs do. The sauce to cheese ratio is just right and the sauce has good flavor without being too spicy or too bland. I don’t typically crave pizza although I will eat it if that’s what everyone else in the party is having. But the Detroit-style pizza coming out of this unassuming food cart behind the taphouse on SW Mill View Way in Bend might just be the pizza that I start craving regularly.