Mt. Bachelor Sports Education Foundation's Thrilla Cyclocross Series, happening on five consecutive Thursday evenings, kicks off at the Athletic Club of Bend's grounds Sept. 5. While several weekend cyclocross series dot the state throughout autumn, Cyclocross Crusade, one of the largest multi-stop cyclocross series in the country, ushers in a two-date medieval carnival vibe to the Deschutes Brewery grounds the weekend of Oct. 26.

A cyclocross race is held on a short, closed course that features surfaces such as grass, gravel, sand pits, pavement and single track. Shin- or knee-high barriers require racers to quickly hop off their bikes and remount them as fluidly as possible. Hairpin corners, often slickened by wear, rain or water hose, keep spectators on their toes and racers rubber side up. The sport's duality demands a road racer's lung-popping pain tolerance and a mountain biker's nimble handling skills. Despite its challenges, cyclocross is the gateway to greater bike racing for many cyclists. About 200 competitors race each week, said Molly Cogswell-Kelley, the MBSEF events director in charge of Thrilla.

"For local riders, whether or not they're just starting out and they want to try and get their feet wet—or get their feet dirty and dusty—this is definitely the race for them," Cogswell-Kelley said.

Cyclocross is an arena where the toughest cyclists and fun seekers coexist. Many race categories, arranged by age groups and/or ability, and often staggered in 30-second increments, means that it's never immediately clear who's off the front of the race—or way off the back. Casual racers blend with race leaders who quickly lap them. This fosters a communal vibe within the taped-off race corridors. Cowbell-clanging spectators soak up the concentrated racing, too. They offer racers beer "hand ups" and good-natured heckles. Cyclocross is highly participatory, even for non-racers.

“For local riders, whether or not they’re just starting out and they want to try and get their feet wet—or get their feet dirty and dusty—this is definitely the race for them.”—Molly Cogswell-Kelly tweet this

"It's a really cool venue," Bowen said. "I don't think people realize how good we have it. The biggest hurdle is the dust. We go out there on week one and we're like, 'Wow, (the trails) have a lot of moisture,' but the repeated braking with skinny tires over and over blows them apart."

Thrilla's southern-most section winds through trails that, for their ashen composition, kick up clouds of "moon dust," which obscure sight lines and hide wheel-grabbing ruts. Bowen, 52, said finding new ways to thread Thrilla's weekly courses through the same landscapes creates a fun challenge. Water hoses will temper this year's dust clouds, which in seasons past has caused a lingering, smoker's-like cough among racers and inspired MSBEF to sell Thrilla t-shirts that feature a gas mask and the tongue-in-cheek motto: "In Dust We Trust."

"Dust is just a Central Oregon problem," Bowen said. "Some people say that section of the course is more mountain-bikey, but really, it will just improve your technical skills on a cyclocross bike." 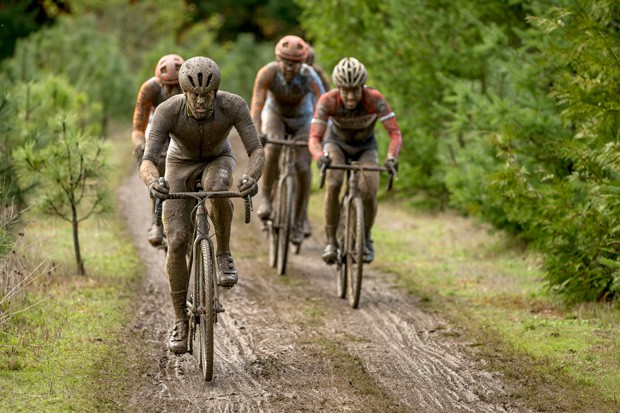 "It's too easy to be sitting on the side of the course, drinking beer, and yelling at someone who's putting in a tremendous amount of work that they should 'Go faster,'" said Kruit, 34, who lives in Bend. "There's a balance — (heckling) should be about motivation. You can also over-heckle someone by getting too personal."

Kruit prefers to hone in on teammates and friends who are locked into mid-pack battles. He considers a heckle a success when he can get the subject of his ribbing to laugh, such as he does by sweetly encouraging a teammate's opponent, who might be just a wheel-length ahead.

"One of my favorite things in heckling is recognizing the race within a race," Kruit said. "In seven laps, you'll see racers go back and forth." One might have power on a paved section and others will have more technical abilities.

"It's really fun to get those heckles, like, 'Ooh, you just got passed!'"

One of Kruit's favorite heckles are reserved for Bowen, who also races at Thrilla. Kruit likes to rib Bowen should he lose traction while navigating a turn.

"I like to tell Bart he should probably take a cyclocross clinic," Kruit said.

See all the upcoming cyclocross races in Oregon: