Crosstitutes Get Shut Down, Reborn

Going viral on social media can be an exciting prospect for an artist. It can bring more viewers, generate sales and push social media reach to a larger fanbase. It can also blow up in your face—which is what two local artists recently found out. 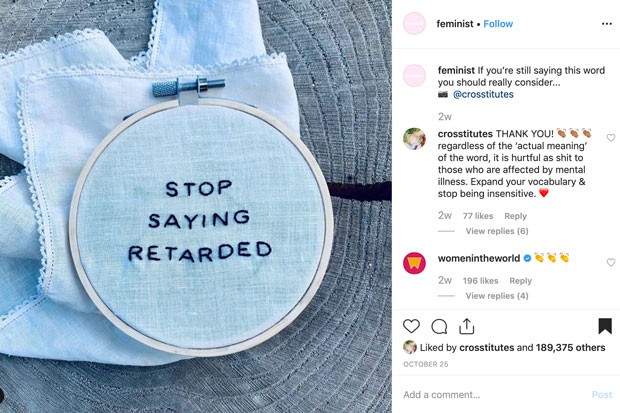 On Oct. 25, an Instagram account with the handle @feminist and 2.87 million followers posted a piece of cross-stitch made by local art duo, the Crosstitutes. Locals Haley Stendahl and Briony Deege use the medium to express their funny and inspiring sex-positive, pro-feminist sayings. The piece @feminist shared said, "Stop Saying Retarded." Stendahl stitched it after hearing the story of a middle school boy who tried to take his life when other students posted images of him on Snapchat with the word "retarded" plastered across them.

Within just a few hours of the post being up on @feminist, the duo behind Crosstitutes said their Instagram feed started "blowing up." The post got 189,000 likes and @Crosstitutes got 2,000 new followers.

Then the trolls came. With some users employing abusive language, the Crosstitutes had to turn off commenting and block certain users. A few hours later, Stendahl and Deege said they were locked out of their account. When they attempted to find out why, they said they went down a rabbit hole of error messages.

For Stendahl and Deege, the result was devastating.

"This is our therapy and our art, and I am not having my voice anymore... it makes me feel so small and I hate that," shared Stendahl. Because they only used Instagram, they also lost touch with supporters who had bought work from them—including work they still needed to deliver. "I am so frustrated toward Instagram. How can you take away something so positive while leaving things that are so negative," stated Deege. 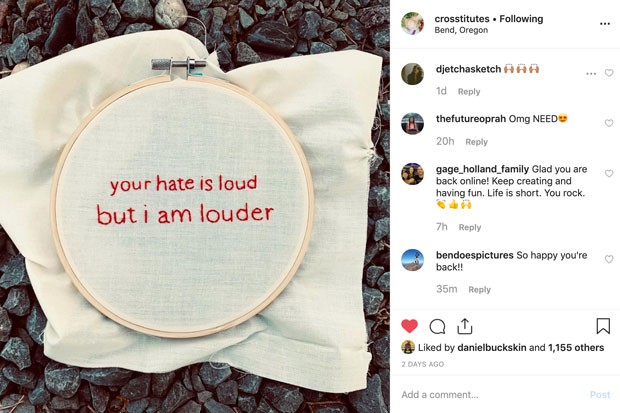 After I spoke with the Crosstitutes on Nov. 9, I sent a request for information to Instagram. Simultaneously, the pair asked friends to post the Crosstitutes' work on their Instagram stories, with the hashtag #BringBackTheCrosstitutes. By 4pm, the account had been reinstated with no response from Instagram as to why it was removed in the first place. I still have not received a response to my request for information as of press time.

Grateful that they got their account back, the Crosstitutes are now more inspired than ever.

As the duo shared via text Sunday night, "We want to make our page more of a brand than business. We are trying out other platforms of social media, such as Facebook and Twitter, to reach a broader audience and spread our message of sex positivity, feminism, and equality through our art!... We realize through our page we reach people from all over, but we want to do the real groundwork here in our local community of Bend. We are still in the works with what exactly that's going to look like, but we have high hopes for this next year and are excited for the future of Crosstitutes."