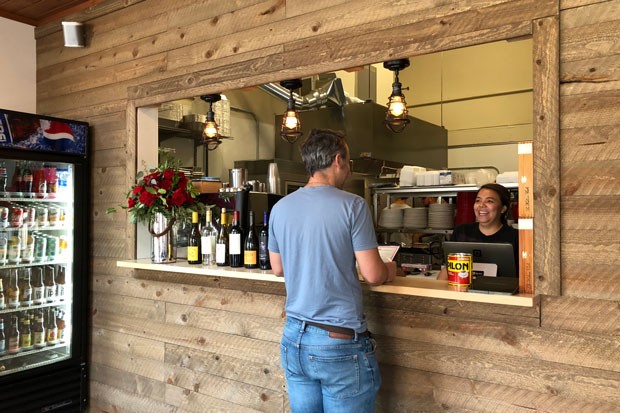 Hidden inside a strip mall on Century Drive is Cuban Kitchen—and by hidden, I mean you can't see it from the street. If the bright red signs weren't out it would be easy to miss, tucked between Cascade Cleaners and Lush Salon.

Cuban Kitchen is open Tuesday through Friday for lunch and Saturdays for dinner. The interior is bright, with walls covered in warm wood wainscoting and framed Cuban prints and cigar boxes. Plenty of seating is available inside, but since it was a beautiful day when I visited, I sat at one of the shaded picnic tables outside.

The only Cuban food I'm really familiar with is the Cuban sandwich, so it was the first thing I ordered. I wasn't sure what else to try from their menu of six entrees and five presses (sandwiches), so I asked Cristina Rojas for a recommendation. She told me to get the puerco asado with moro rice and maduros, or sweet plantains.

I sipped on a sweet, iced Cuban latte, called a cortadito, while I waited for my lunch. Sugar whipped with espresso is the main difference between an Italian latte and a Cuban one. It didn't take long for my Cubano. Cuban Kitchen calls its sandwiches "presses" in reference to the plancha, a flat panini-maker, used to heat and meld the layers together. 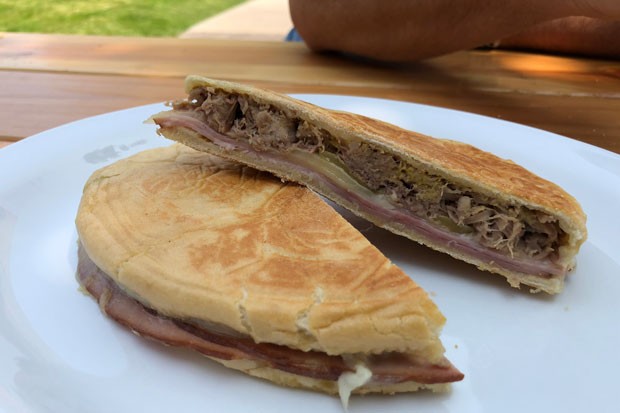 The Cuban press, with roasted pork, ham, swiss cheese and pickles, was delicious, the pickles and mustard perfectly balancing the rich flavors from the meats and cheese. I've eaten quite a few Americanized versions of the Cubano. Oftentimes the bread isn't right; usually way too thick and chewy. The Cuban bread from Cuban Kitchen was light and crispy.

Next up was the Puerco asado—what Cuban Kitchen's owners say is the national dish of Cuba. Pork is marinated in tropical spice and citrusy and garlicky mojo juice, then slow cooked and topped with grilled onions. It's comfort food, and the tender pork warmed my belly like stew on a cold day. The side of moro rice—white rice and black beans—was so yummy I couldn't stop eating it. Cubans definitely know how to do beans and rice! I also tried the fried maduros for the first time. They were tangy and slightly sweet. 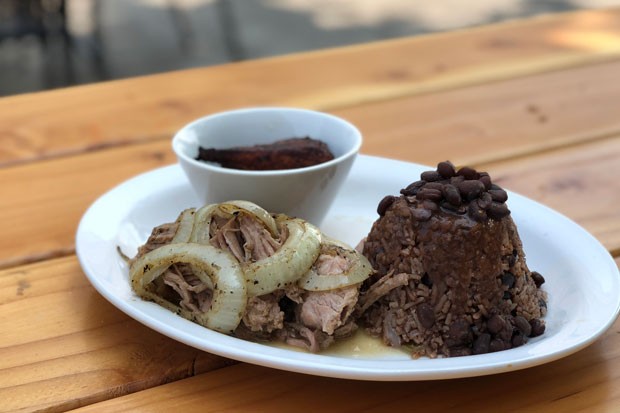 In all the dishes the spice was subtle, like the way a grandma seasons dishes she's made for years, knowing how to layer flavors without any one becoming overwhelming.

When Cristina and Chris Rojas moved to Bend from Little Havana, Miami, they couldn't find the Cuban food they love. That craving motivated them to open Cuban Kitchen. "All of our food is 100 percent authentic," said Chris Rojas, "made with Cuban family recipes, and love, that date back as far as the early 1900s."

He's not kidding about the authenticity. In a review on Yelp, a reviewer noted, "As a Cuban-American raised in Miami, Florida this Cuban restaurant is a welcome addition to our community. The food is excellent, and I am reminded of home when I eat there." And on Nextdoor, the social networking site for neighborhoods, Nicole Moore Perullo posted, "It is truly authentic Cuban food and I know as I am from Miami."