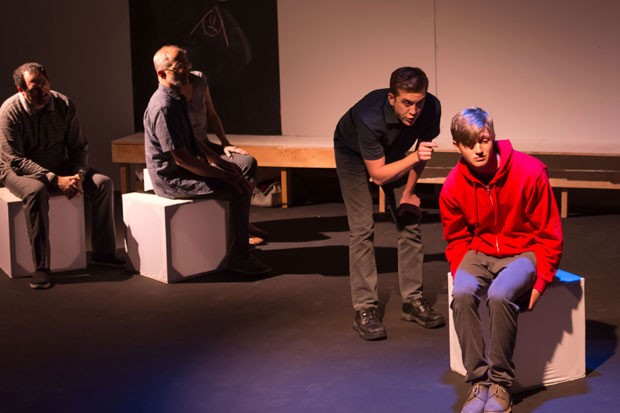 "The Curious Incident of the Dog in the Night-Time" is a personal, scientific and visual masterpiece of dramatic theater. The play, opening Friday at the Cascades Theatre, intrigues with choreography and visual effects, while also enlightening with its words.

"Curious" is the coming-of-age story of 12-year-old amateur detective Christopher Boone. While his condition is not specified, it's apparent Christopher is somewhere on the autism spectrum. The play explores the boy's response after a neighborhood dog is found murdered in his neighborhood, and how he goes about following an almost instinctual urge to solve the crime. The production wowed critics when it opened in London in 2013, eventually tying "Matilda" (2012) for a record seven Olivier awards, including Best New Play.

"It's incredibly physical and incredibly technical," Director Hilda Beltran says of the special challenges inherent in the production. "The original Tony Award-winning and National Theater productions were choreographed by a group called Frantic Assembly. They're known for working with the body, ensemble choreography. It's movement-oriented expression, a metaphysical expression of (Christopher's) connection with the world, physicalizing and visualizing his thoughts."

An ensemble of shadow actors occasionally accompanies the main character, in order to convey with movement how Christopher's mind works. Animated, projected backgrounds add to the multi-media enhancement of the character. The play also includes a narrator reading Christopher's words as if from his own personal journal, so the audience can easily follow the timeline.

"It's also a play within a play. The script is very clever that way," Beltran says. "While the scenes move between the past and the present pretty fluidly, through the use of the narrator, we can kind of get grounded in what's really happening.

"The ensemble operates kind of like a Greek chorus. They're a part of the action but also sort of objective observers," Beltran explains. "They're kind of expressing Christopher's inner life. In a similar way, the technology, the projections, the lighting and the sound express his responses to stimulation and also the way he processes information."

Beltran feels it was important to preserve the design elements of the original London production, even though to do so involved educating herself about autistic personality and a great deal of special choreography and technology. "But for anyone familiar with the original, it would be a disappointment if it wasn't recreated. What's really cool is that we create it through resourcefulness, as opposed to an endlessly large budget."

While autism is a unifying theme of the story, it's not all about the behavioral disorder. "The whole physicality and the technology is an expression of Christopher's perspective, and yet it celebrates the way different people (in general) perceive information. It's a very relatable coming-of-age story for really any teen who discovers that he needs to break out on his own and not be dependent on adults."

Beltran says the most obvious theme of the play is celebrating difference, but she adds, "maybe less famously, it's really embracing those families that deal with having a child who is different from what we call 'normal.'"

Christopher has difficulty interacting with humans, but he has no problem relating to animals. He adores his pet rat, for example, and is deeply affected by the sudden death of his neighbor's dog. His struggles with communication may hamper his efforts to solve the mystery of the dog's demise, but his special genius with mathematics and logic enable Christopher to ultimately uncover the culprit. Along the way, he learns a few new tricks for relating with people.

Note: The Sunday, Sept. 2 performance will be sensory friendly, designed to accommodate individuals who are on the autism spectrum and have sensory processing disorders. The performance is open to all and will involve ASL interpreters as well as minimal sound, light and projection cues. Lights will remain on during the performance.

Artwork by youth on the autism spectrum will also be on display in the theater lobby.

"The Curious Incident of the Dog in the Night-Time"