Cut to the Quick

"Knives Out" skewers the 1%

"Knives Out" is being marketed as a post-modern deconstruction of the whodunit genre—complete with a genius detective, a stacked cast of great actors and a plot so full of twists you might get whiplash from all the head shaking. Writer/Director Rian Johnson is such a cinephile that he's incapable of making something that doesn't at least poke fun at the strictures of genre, but more than being a clever riff on the nature of stories, he's made a perfectly executed and wildly entertaining mystery. 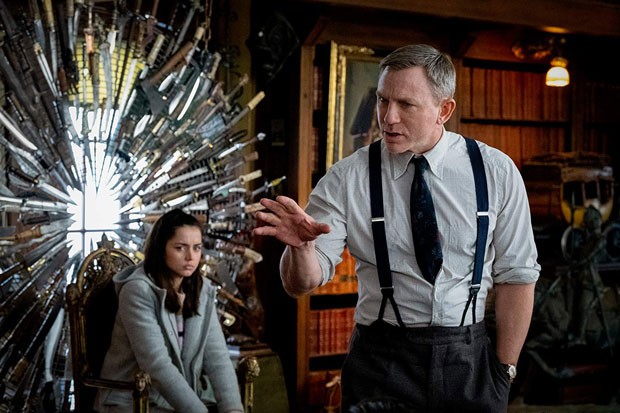 The premise is a delight: Harlan Thrombey is a wealthy mystery writer along the lines of James Patterson who brings his children and extended family together at his country estate to celebrate his 85th birthday. In the morning, Thrombey's body is found, an apparent suicide, but a Southern gentleman detective shows up determined to prove that it was murder.

Each character has at least one secret, and aside from Marta they're all fairly greedy and terrible people. Daniel Craig's detective Benoit Blanc is one part Hercule Poirot and another part Foghorn Leghorn, interviewing each family member and setting up a timeline for Harlan's death. With such a fantastic group of actors all playing multi-layered and interesting characters, the film ends up playing less like a smug deconstruction and more like a classic throwback to films such as "Clue" and "Murder by Death."

There are so many twists to the expertly crafted plot that to tell anymore would be cruel. Rian Johnson once again proves that he's not interested in making movies that aren't layered with meaning, just as he did with the Neo-noir masterpiece "Brick," the time travel brain-melter "Looper" and his much debated "The Last Jedi." Sure, on its surface "Knives Out" is an old-school murder mystery, but there's a lot to unpack about class, race and white privilege that most movies don't have the spine to address.

"Knives Out" had the audience screaming with laughter and surprise and everyone was talking about it in the hallway afterwards. I don't think it reinvents the wheel like the marketing suggests, but the film's ambitions aren't that lofty. When a film is as charming, surprising and lovingly crafted as this one is, what else do we need?