'Cutting Out Everything That's Not a Bear' with Mosquito Bob | The Source Weekly - Bend, Oregon

'Cutting Out Everything That's Not a Bear' with Mosquito Bob

On Aug. 15 I received an email from someone only identified as Mosquito Bob in my inbox, hinting about a location.

"Hey man, I know a place in the pines that's magical, enchanted, whimsical, creative, entertaining, dangerous, exciting and unique," Mosquito Bob wrote. "I would like to share it with folks."

Reporters are used to getting strange emails. Whether it's a pushy PR firm pitching a story about a Seattle-based dog trainer, a local asking you to report on their neighbor's overgrown lawn or a political screed about why and how I should cover an event, there's usually something interesting sprinkled among the dozens of press releases we get in a day. But this one really piqued my interest.

Within five minutes I responded asking what this place was, and three minutes after that he invited me to swing by in a similarly cryptic fashion.

"Come up and I will show you. There is a private hydration station. Bigfoot & bear sightings most evenings," Mosquito Bob wrote.

I wondered what this could possibly mean. There were three things I imagined this could be: At worst I was being lured to a remote location by someone named Mosquito Bob; slightly better, I was being trolled and the location is infested with mosquitos that would eat me up or this was some kind of weird guerilla marketing. He sent his number, asking to talk. Mondays are usually one of our busier days at the Source, but I had to put my work aside to find out what the hell Mosquito Bob was talking about.

Turns out it was some guerilla marketing. Mosquito Bob is breaking into the woodcarving business and wanted to show off the bears, bigfoots and bar he's built on his property in La Pine. Usually, I'd leave the arts and culture stories to a reporter more suited to it, but Mosquito Bob approached me creatively enough to take full ownership of the story. 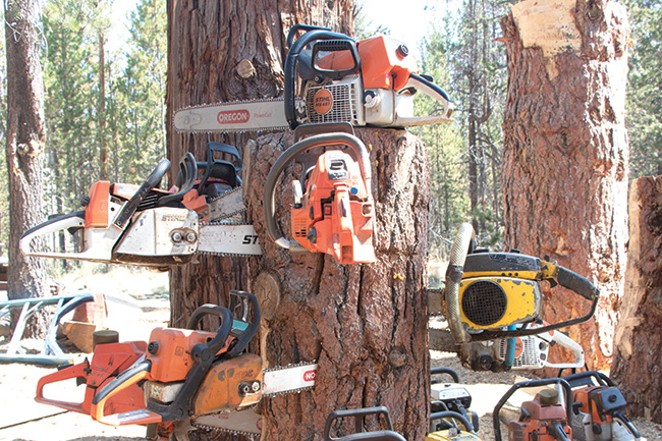 The name Mosquito Bob (the only name he identifies as, or at least the only name he'll share with news reporters) draws from the protective eyewear Bob wears while using one of the hundreds of chainsaws he has strewn around his property. He has an encyclopedic knowledge of chainsaws and talks about them the same way a car enthusiast would talk about classic cars — noting the looks, feel, technology and sound of different chainsaws. The modern saw chain has Oregon roots; in 1947 lumberjack Joseph Cox designed the Cox Chipper Chain after observing how timber beetles cut through trees.

"That beetle has a little (c-shaped) jaw like that, you see that little tooth cutter," Mosquito Bob said while showcasing one of his chainsaws. "He has one on top and one on the bottom. If you listen and then you go to one of these beetle-ridden trees and listen to that tree, you'll hear the same sound as a chainsaw, almost sounds like steel. The guy designed crosscut chain, and it revolutionized the world because these sons of bitches can cut, man."

He learned the mechanics of chainsaws tinkering on old broken saws and putting them back together. He gives each of his chainsaws its own name and has a purpose for all of them. If he's felling timber he's using a Stihl, but when carving he prefers a Husqvarna or a McCulloch.

"They've got a cadence; they remind me of guitars. Chainsaws and guitars are a lot alike and a lot of sawyers play guitar; there's a cadence to them, there's a dance," Mosquito Bob said. "Now they're just the paint brushes, man. Every tool here is a paint brush for my art."

Bob's a guitarist himself, and points to his "theme song," Jackyl's "The Lumberjack," to get a sense for the cadence of a chainsaw. In it, the front man Jesse James Dupree plays a chainsaw solo over a blues riff. But unlike guitars, chainsaws are dangerous tools and are used in the U.S.'s most dangerous profession. 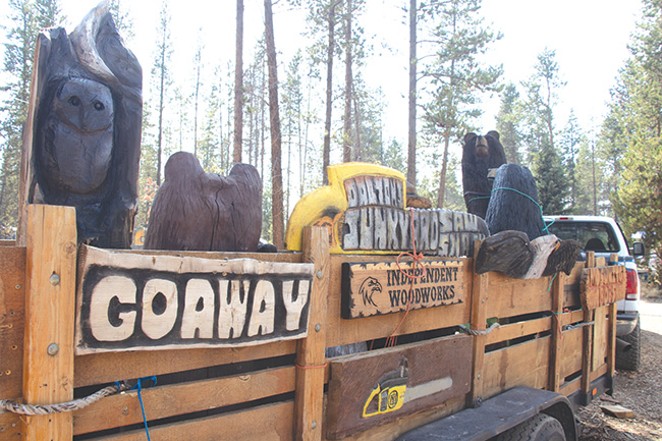 Mosquito Bob got into the logging industry setting chokers on trees, aka attaching cords to trees so a crane can haul them away. It took him a long time to earn his stripes and join the cutters chipping away at trees. Finally, they let him join, but not with a saw — he carried their gas tanks for six months before he got to work lumberjacking.

"The first logging crew I ever worked for, the logging didn't scare me, the men did!" Mosquito Bob said.

Still, he saw the danger of the industry firsthand. He's seen men die on the job. In 1996 he crushed his leg in 18 places and spent the next three years on crutches. By the time he healed up the logging industry was just about gone. He saw the end of logging, but not before learning from the legends of the tall timber.

As logging became more mechanical and the less labor-intensive, it became less appealing for Mosquito Bob. He liked "running in for his job, running out for his life and looking up." He didn't want to be cooped up in a cab pulling levers so he got out of the cutting game and got into building. He started setting up framing for houses, where he could still work his chainsaw.

"The thing with framing is, it didn't have what I wanted, the tribal type of crew," Mosquito Bob said. "I missed the timber. I missed the woods. Now you're downtown, you're eating out of a friggin' mini mart every day. I really don't want to stop downtown."

Mosquito Bob bought an industrially zoned piece of land in La Pine where he can carve without bothering the neighbors. He started carving wood about four years ago when a friend commissioned him to carve a morel mushroom.

Bob can hardly draw a stick figure after years of operating vibrating saws, but he's an artist with a chainsaw. He said he approaches carving a lot like he did cutting trees. It's all about imagining a finished product, and chipping away until it's finally realized.

"Everything in the tall timber is a cutting solution. You'll sit there, knock them down like dominoes with the same cut every time, but then you'll get into a patch and you might have to go cut some stuff loose to get the results you want," Mosquito Bob said. "My cutting solution on carving is like cut away everything that isn't a bear, cut away everything that isn't a dog or a horse or a Sasquatch."

Those bears can be as tall as 9 feet or the size of a stump. Just like in logging he's been earning his stripes in carving by burning his gas tanks down, practicing on new logs. He doesn't start with any designs on paper; he just tries to find the subject in the wood.

His ultimate goal is to have his carvings be like a gallery at his home and can demonstrate what he can do for private commissions. He'd also like to host workshops on carvings and saws, and would really like to see a chainsaw festival in La Pine. Mosquito Bob said his carving isn't quite a full-time business yet, but he's hoping to carve out some territory in La Pine where he's the carver of choice.

"You don't get rich. We're not scooping up $100 bills with a butterfly net. Carving is probably the hardest job out of everything I've done," Mosquito Bob said. "You don't have anybody to ask. Nobody shares their secrets. Maybe if you get into their circle, but they don't want you on their corner. Because we're all starving artists, you know, just like any other."

Mosquito Bob said he's taking appointments for commissions and live carvings. This Friday and Saturday he'll be finding the bear in his logs at Shandy's bowling alley in La Pine. He'll even have a couple carvings for sale, which he'll trade for money or, of course, old chainsaws.