The Art of Teaching Kids Responsibility While Having Fun

When I was young, my grandfather taught me just about everything: how to fish, play golf, shoot pool—and even how to catch a football, even though he had to throw underhanded because he had a bad shoulder. But all this fun came at a cost: I had to learn how to do chores to earn a round of golf or a trip to the lake. By the time I was 10, I could change the oil in his car, weed and pick berries in the garden—and I even learned how to cultivate an area to catch nightcrawlers. I also learned how to make noodles from scratch with my grandmother. They were Depression-era people and nothing came for free. 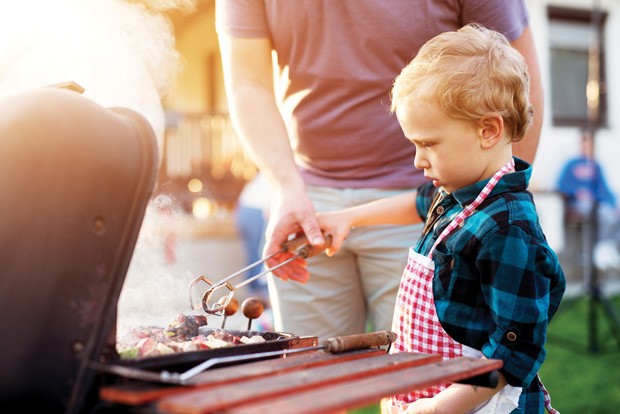 Now that I have a son of my own—who's named after this grandfather—I'm teaching him the same lesson—that nothing comes for free. You have to know how to work. Here are a few of the chores my 7-year-old and I have begun exploring.

This is probably the easiest chore to get a boy interested in doing. What's not to like? You get to play with a hose, get wet and soapy—and if you're lucky, the whole thing turns into a water fight. I got my son interested in car washing just by the mere fact that he could use the hose. The first time we tried this he was only about 5 and couldn't even reach the hood to help sponge the soap on, but he still had a blast. His job was to get the car wet, wait until I cleaned an area, then hose it down again. As a bonus, his older sister made the mistake of coming outside when we were just finishing up. A little gleam hit his eye as he turned on the hose full blast. She was less than impressed, but my son and I got a kick out of it—and we turned most of the afternoon into a water fight with the whole family.

There's something about power tools and boys, especially ones that sound like a small motorcycle. Having a very flat—and small—grassy area made teaching Aidan how to mow the lawn a snap. After starting the mower and giving him a few short lessons on working around his mom's flowers, Aidan took right over and did a pretty good job. Having a self-propelled mower has its ups and downs. It's nice that a younger child doesn't have to try to force the mower up hills or through long grass. The downside is that the mower can really get away from you. We had some lessons on how to release the bar that powers the mower so that the aforementioned flowers didn't accidentally get a haircut. 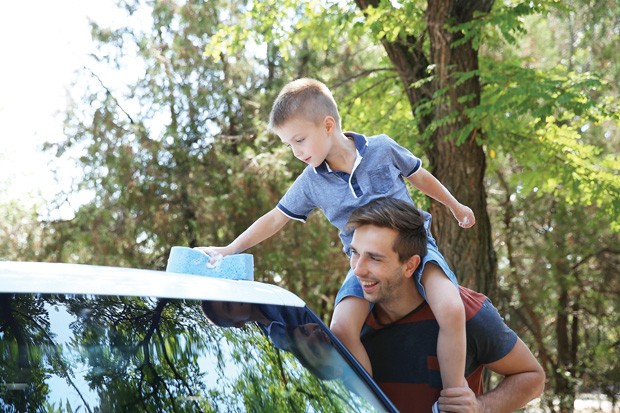 I'll have to admit that I didn't care for weed pulling as a kid. My grandparents' house was a different story, but at home, I'd do anything to avoid it. Generally speaking, I'd lose my gloves and have to do the work without them, and those prickly weeds always seemed to cut my hands. With my son, it's different. If he even gets a hint that his mother wants to garden—he's all in. The biggest lesson with weed pulling is to make sure you're pulling a weed and not someone's favorite flower that happens to look similar. Springtime is the best time to get the weeds out. Come summer, the ground in Central Oregon becomes brick-hard and it can be pretty tough to get them out.

Here's a fun chore that teaches a few different lessons. Start with organizational skills—think trying to teach your kids to clean their rooms—and end up with tool safety. Aidan and I did one garage day where we pulled everything out and laid it in the driveway. Then we plotted on paper where things should go according to their function—and how often they were used. I let Aidan decide how to organize the tools, sports equipment, camping stuff and miscellaneous things like painting supplies. In the end, the garage was much more organized and Aidan understood why keeping his room clean makes it easier to find things. He also learned about which tools are safe for him to use and which ones definitely need an adult to operate. Will his room stay clean into his teen years? Probably not, but at least he's got the general idea.

My son loves to cook. He makes scrambled eggs on his own, helps with cookies, pancakes and many other baking projects. He wanted to help with the barbecue, but I've been hesitant because of the risks involved with propane and the myriad places one can get burned. I decided that to get him involved, we'd start with cleaning the grates with a nylon brush while the barbecue was cold. After he mastered that, I let him start the barbecue—which has a self igniter—and then carefully shut the lid. Once he was comfortable with starting the barbecue, I found a sturdy step stool and let him flip hotdogs with a long set of tongs while wearing Ove Gloves. All through the process, we discussed safety, including how to avoid burning yourself and how not to blow up the barbecue. Propane smells like rotten eggs for a reason and now Aidan knows that if he smells it and the barbecue isn't lit, to tell an adult immediately and turn off the gas!