If we've learned one thing in the 25 years since Pixar released its first film, "Toy Story," it's that the studio is master at balancing emotion, comedy and excitement. You're guaranteed not only a visually stunning cartoon that kids will enjoy, but also a story that will absolutely wreck you as an adult.

Whether it's the loss of childhood in "Toy Story 3," the acceptance of death in "Coco" or the dance of love and heartbreak in "WALL-E," the ideas and themes for Pixar films have always superseded being popcorn entertainment for kids. The newest offering, "Onward," is no different, but tends to feel like a reverse-engineered tearjerker instead of coming by its emotions honestly. 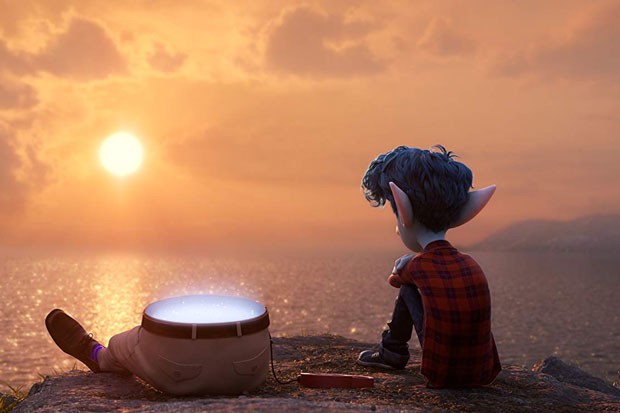 "Onward" exists in a world where magic used to exist, but is now an urban legend. All the characters are still creatures of myth, including pixies, centaurs and manticores, but they drive, watch TV and play D&D instead of going on quests or conjuring magic spells. The two heroes are Ian and Barley Lightfoot, a pair of elf brothers who live with their widowed mom, Laurel.

When Barley was a child and Laurel was pregnant with Ian, their husband and father, Wilden, became sick and died, leaving Ian to grow up without meeting his dad. For his 16th birthday, Ian is given a magical staff, a rare gem and a summoning spell which will bring his dad back to life for 24 hours. But the gem isn't quite powerful enough to summon all of their dad and only brings forth the lower half of his body, so the two brothers take to the road in Barley's creepy van to find another gem to power the staff and finish summoning their dead dad.

It's a heart-tugging concept made all the more emotional by the voice work of Tom Holland as Ian and Chris Pratt as Barley. Holland is becoming a pro at finding nuance and emotion just with the timbre of his voice while Pratt (who is obviously replacing Jack Black as Barley) basically does his Thor impression from "Avengers: Infinity War" for 90 minutes. They're perfectly cast (as is Julia Louis-Dreyfus as their mom, Octavia Spencer as a manticore and Lena Waithe as a cyclops), and carry the film effortlessly.

"Onward" is designed as a tearjerker for anyone who's either lost a dad or never had one to begin with and seems engineered with that objective in mind. The tears that come from "Up" or "Toy Story 3" were byproducts of a beautiful story, lovely characters and emotion that felt earned throughout the runtime, but in "Onward" there's a calculation to the sadness that feels manipulated. It's a weird difference, but you can feel it: whether your tears are coming from something pure and honest or whether they're coming from someone specifically setting out to make you cry.

Either way, it worked on me plenty. I've got daddy issues out the caboose and "Onward" played me like a fiddle. Pixar is really that good: I knew I was being emotionally manipulated, and instead of resisting it, I was like "Take my sweet tears, Pixar, I LOVE YOU!" What a softy.