The Deschutes Basin Habitat Conservation Plan was approved in December with the goal of increasing instream flows in the river. Then another drought year happened.

Last summer the Wickiup Reservoir dried to just 1% of its capacity, the lowest it has been since it was built in 1949. In an average year the reservoir, which stores Deschutes River water, would be at about 25% of its capacity at the end of irrigation season, with just over 63,000 acre-feet. Last year's shortage illustrated a decade of drought and generous allocations of water rights.

This shortage continued this year, and the reservoir is holding just over 60% of what it was last year and less than 40% of what it usually stores in June. This challenge arrives just months after the approval of the Deschutes Basin Habitat Conservation Plan for the Deschutes, submitted by eight irrigation district that reimagines what the Deschutes will look like. 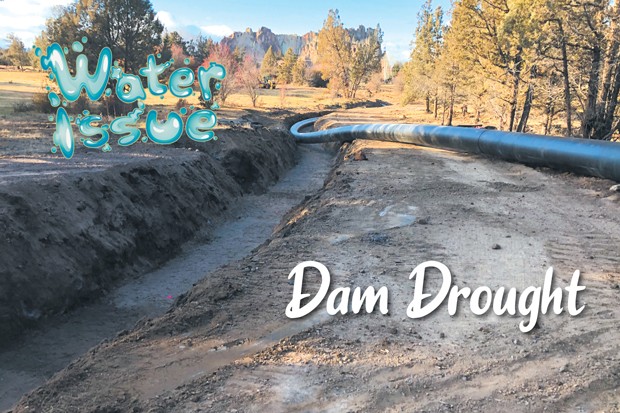 The natural unimpeded flow of the river runs at about 600 cubic feet per second in the winter and over 1,000 cfs at its peak in the summer. The DBHCP doesn't seek to restore the river to its natural flow, but to support habitats for the Oregon spotted frog and Redband trout. The goal is to maintain flows between 4-500 cfs in the winter to support springtime breeding grounds for the frog, listed as a threatened species under the Endangered Species Act. The Redband trout, meanwhile, is listed as a "species of concern."

"Both need more water, but the Oregon spotted frog has very specific breeding flow needs in the spring, for example. And still has specific migration patterns in Crook and Whychus ," Fitzpatrick said.

Enough water to go around?

Irrigation districts will have to coordinate more than they have in their over 100 years of existence to make sure there's enough water to go around. The season could be especially difficult for junior water right holders. Oregon water laws are called prior appropriation, meaning primacy in water collection goes to the older districts.

"All the reservoirs are low, the natural flow in the rivers are low, everything’s low due to the years of drought we’ve experienced so far and it’s been particularly hard for North Unit Irrigation District as the junior water right holder on the river.”—Mike Britton tweet this

"Basically, the first ones here got to apply to the state for water rights, and they were granted," Fitzpatrick said. "North Unit has a 1913 water right and that is very junior. So by the time we got around to 1913 the state had actually given out more water rights to use the water than exists in the river in the summer months."

Fitzpatrick said she believes that the law of prior appropriation is the root of Central Oregon's water problems today.

With the DBHCP, irrigation districts will have to find some ways to work together to meet flow goals.

One of the main ways irrigation districts are attempting to increase capacity is through improving water infrastructure, such as replacing open-air canals with underground piping, on-farm sprinkler upgrades and lining canals to reduce seepage.


"That's really the district's main strategy to meet the flow commitments under the habitat conservation plan," Fitzpatrick said. "For the first time ever under that plan the districts have committed to meet flow targets. So, they're going to triple the flows in the next five years, and then continue to increase the flows from there for a significant amount of restoration work."

Water rights in the basin are skewed heavily toward irrigation, with those districts holding 86% of the basin's water rights. Twelve % of water rights are reserved for instream purposes and 2% for municipal uses.

Piping projects are very expensive, but they save a lot of water, advocates say. It's estimated half of the water either evaporates or drains into the ground while traveling in open canals. 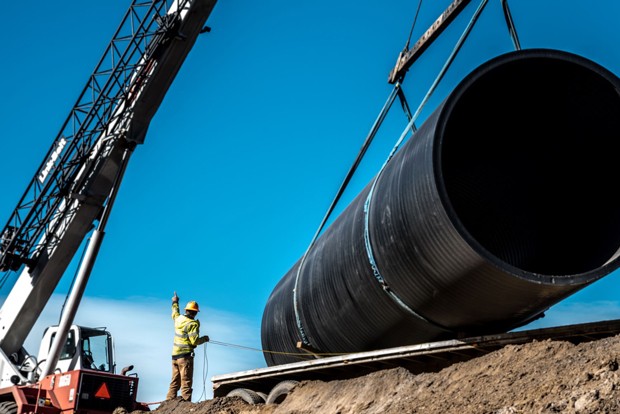 "Especially in this watershed in these volcanic areas, because there's so much seepage if you want to get, say, five buckets of water delivered via a canal from point A to point B, you might have to release 10 buckets of water, because five of them are going to go into the ground," said Gail Snyder, founder of Coalition for the Deschutes.

The other tool irrigation districts are using is water marketing, where they temporarily lease or buy water rights from individuals and give that water back to the river or to a junior irrigation district struggling to meet demand.

"We've had an annual industry and water leasing program for a long time, and this year it's generating 60 cubic feet per second, and leasing about 4,500 irrigated acres in stream," Fitzpatrick said. "What we're hoping to do is to build on that with districts to really open up opportunities for irrigation district patrons to lease water, leaves more water and lease it between districts and to the river."

The worst of the impact will likely be felt in the Northern Unit, which relies on the Wickiup Reservoir for a lot of its water. The area has many farms that grow high-production crops like alfalfa, mint and carrot seed.

"We've done some projects recently, and in the past, to develop and stretch our water supply, but being the junior right holder, we've not really been able to," Britton of North Unit said. "We don't have a lot of options. My conservation projects in reaching out to our other irrigation districts, really at the end of the day, that's the only way we can survive is to get help from others."

Trouble in the Klamath Basin

For local farmers, things could be worse. In the Klamath Basin, farmers purchased property next to the Klamath Irrigation District's headgate and have expressed their intent to force it open, after federal officials ordered Klamath Lake retain the water it had to protect endangered fish. The protest started as a local affair among farmers who would lose significant income, but attracted the attention of People's Rights, an organization formed by Ammon Bundy in 2020. Bundy is most well-known for occupying the Malheur Natural Wildlife Refuge in 2016, leading to a shootout with federal agents that killed occupier LaVoy Finicum, who was allegedly reaching for a pistol.


The two farmers that bought the property adjacent to the headgate, Grant Knoll and Dan Nielsen, have thus far pursued a legal route, but as Oregon Public Broadcasting reported, the farmers haven't had much success.

"Your merits of what you're trying to argue never get heard," Knoll told OPB. "So the frustration is building because we want to use the legal system and if the legal system's failing you, what's next?"

In 2001 Klamath was ordered to halt irrigation deliveries to protect an at-risk species, though the federal government ultimately relented and allowed limited water deliveries. With as severe a drought as Klamath Lake is facing, it's unclear if that will happen this time.

Related Water Issue 2021: From droughts to dams to glaciers and canoeing, there's lots to explore with water in Central Oregon

Water Issue 2021
From droughts to dams to glaciers and canoeing, there's lots to explore with water in Central Oregon
By The Source Staff
Local News