Dance, No Matter What | Outside Features | Bend | The Source Weekly - Bend, Oregon

Dance, No Matter What

Think you can't plan a dance performance online, without partner interaction? A group of local Acro Fusion dancers prove you can

"My youth Acro Fusion program runs from September to June, following the school year's structure," Kay explained. "We spend the first three or four months training technique and acrobatic skills. The remainder of the year is spent choreographing our annual performance piece. When studios were forced to close unexpectedly in March, we were about halfway through our choreography." 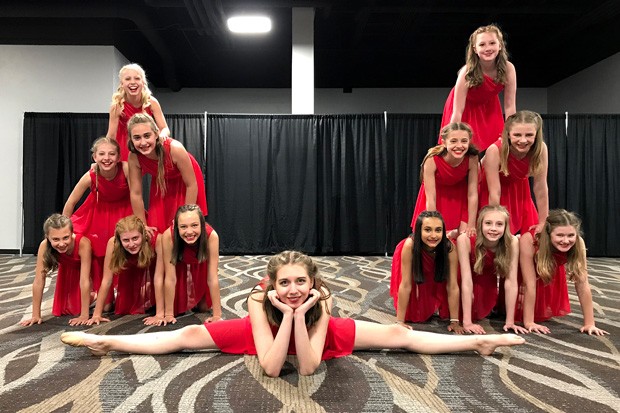 On March 12, Gov. Kate Brown directed public schools to close statewide, effective March 16. Brown then ordered all non-essential businesses to be shut down effective March 23. Since then, Central Oregonians have experienced the beginning of a phased reopening followed by still more closures and mandates. Masks became required statewide as of July 15, both indoors and outdoors when social distancing guidelines cannot be maintained.

Yet rather than sit back and wait for an eventual reopening, Kay decided to move remaining choreography sessions and rehearsals online.

"The kids pushed through three months of Zoomed classes to continue skill training," she said. "This was incredibly challenging due to at-home practice space limitations, Zoom and music complications, the inability to learn formations—they had zero access to their Acro partners, meaning they were unable to train any of their partner skills during that time."

As parents adapt to homeschooling and teachers adapt to Zoomed lesson plans, those who have dedicated their lives to the extracurricular enrichment of local youth are also undergoing unique challenges, and proving to themselves—and their students—that there's great reward in overcoming adversity.

"Due to COVID and the contact-style of the dance, they weren't allowed to run their partner stunts until the week before the show," said Kay. "We were forced to modify constantly, including the night before the performance. I can't tell you what a no-no this is for young performers, but we had no choice. These are kids, ages 10 to 18. These are not professionals. But what they were expected to pull off is nothing short of amazing! I refused to give up, and so did they."

Kay said that she was forced to create a "Plan C," seeing as "Plan A" and "Plan B" had to go by the wayside. "I secured a venue, lighting, and a videographer," she explained. "I communicated endlessly with parents, students and studios to coordinate schedules and regularly check on health statuses. When performance day came, it looked very different than past years. Instead of performing for a live audience, my students performed for a camera. Due to COVID precautions, friends and families were not permitted to attend the filming. The only people present for the live performance were myself, my videographer and my advanced students. I chose not to stream the performance, but instead created a video that would be released to the public following the recording."

Overall, Kay reported that the experience was a powerful reminder of human resilience. "I want my students to know their voice is powerful, and that their hearts can change the world," she concluded. "These girls overcame so many obstacles to deliver this performance, and I hope people will take the time to share their fierce hearts with the world. I am so grateful for the dedication and passion that these girls brought to my program this year. This could not have happened without their adaptability."

Link to the performance: youtube.com/watch?v=o8_UDIyQJkY&feature=youtu.be