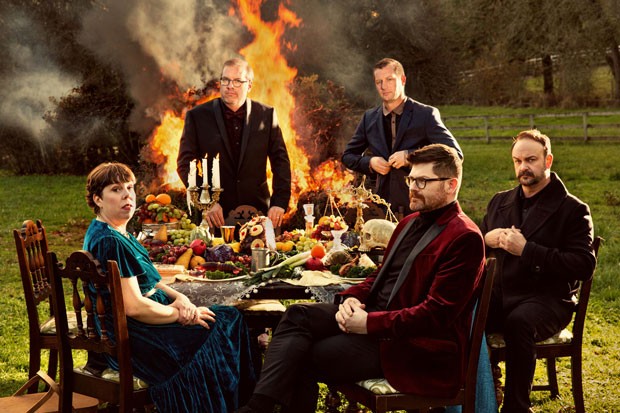 As a music writer, as a music lover, you can only hope that on your birthday that a band you adore plays a concert nearby — at least that's what I cross my fingers and wish for when I blow out my candles. This year, I finally lucked out; a band whose most recent album I can't get enough of performs on my 32nd birthday. The Decemberists return to the Les Schwab Amphitheater in support of their most recent album, "I'll Be Your Girl."

Upon hearing "Severed," the first single off of "I'll Be Your Girl," listeners notice a sound that may not be as familiar, incorporating synthesizers more heavily than some fans may be used to. According to the band's lead singer Colin Meloy, it fits perfectly within the language of The Decemberists.

"It was reaching into a different part of our collective record collection," Meloy says. "You know, I feel like at the end of the day, we've experimented enough over the course of our career that this felt like it was within the language of The Decemberists. It was certainly the music I grew up listening to, like New Order and The Cure, who I consider prime influencers of what I do, which may not have been clear throughout the course of our career."

Meloy is ready to try something different. After the last couple records treading the same well-worn path—something that brought them comfort and success, the band was ready for a 90-degree turn. For "I'll Be Your Girl," the band worked with a new producer in a new studio, which invited experimentation. Meloy remembers band mates Chris Funk and Jenny Conlee showing up to the studio with synthesizers under their arms. After experimenting with arrangements and playing with sounds, everyone got excited.

Diving into the lyrical content of the album also reflects growth and refinement on Meloy's part. This time around, the songwriter, who works best mid-day at home, took more time editing and refining the lyrics.

"The idea of writing in a hotel room is awful to me. I've always been terrified of someone hearing me. Having people hear me practice or do the humiliating task of writing songs, which involves singing nonsense words — I actually need my own space away from people."

The Decemberists are known for mixing darker lyrical themes with more upbeat sounds. Since the new album debuted in March, I've listened to it endlessly. From "Everything is Awful" to "Sucker's Prayer," each song presents a relatable, yet dour feeling that we all have fallen victim to in our own lives—while also being upbeat sonically. The album relays common themes of isolation and extreme emotion, but taken to a place of humor.

"I think some people questioned, 'Has anyone checked in with Colin Meloy recently?'" Meloy says. "I get it. I think there are certainly darker tones than may have been on previous records. I also think, the music itself is more upbeat. We've traded that in a lot in the past, marrying upbeat sound with dour lyrics."

The band's latest single, "Sucker's Prayer," tells the story of a man on the brink of suicide who sings, "I wanna love somebody but I don't know how / I've been so lonely and it's getting me down / I wanna throw my body in the river and drown." The song continues by telling how he stuffs rocks in his pockets and wades into the water, but the current carries his pants away, leaving him standing in the river nude. Dark, yet humorous: the perfect marriage in indie rock songwriting.

"I hope that they find something they can relate to," Meloy says of the album. "I think it is really about finding that darkness in yourself, or that despair, and trying to house it in some humor and finding the absurdity in the catastrophe of living. At the end, I would hope, it sticks a hopeful note with 'I'll Be Your Girl.' I hope at the end that people come out feeling better. That sort of feeling of someone else feels the same way I do can be healing in its own right."