Politics have hit a fever pitch, and that temperature extends across numerous branches of government

At this point in the year, it's safe to say the weather is not the only thing that's boiling hot. Politics have hit a fever pitch, and that temperature extends across numerous branches of government. Failed Bend-La Pine school board candidates who didn't bother to speak to anyone but Fox News during their candidacy are now speaking out and packing school board meetings, causing a ruckus over masks in schools and the fear that a more accurate portrayal of American history might land rent-free in their kids' heads. Meanwhile, the Deschutes County District Attorney is at odds with Bend cops over flimsy arrests made during the clearing of a local houseless camp.

The spat between DA John Hummel and Police Chief Mike Krantz is pushing the political temperature up at the moment. Bend Police sought charges of trespassing against several protesters and a houseless individual while clearing the encampment at NE Second and Emerson Avenue on June 23. As is the case in any of these situations, the Bend Police tasked the DA to file the charges against individuals they arrested in course of those duties. In this case, DA Hummel didn't file those charges. 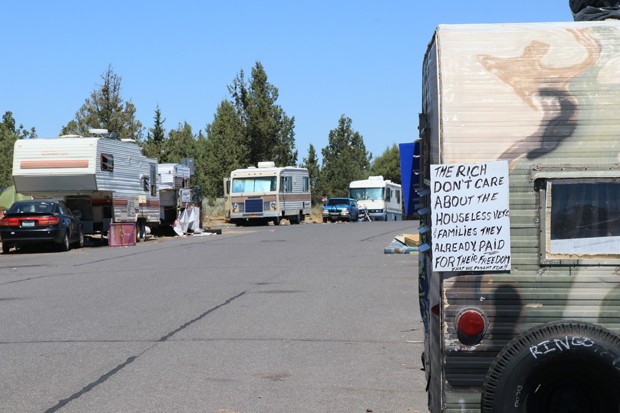 The houseless person on the scene had asked to use the port-a-pottie, and when officers refused, the man ran toward the bathroom, a letter from Hummel to Krantz detailed. Cops then tackled him and took him into custody, allegedly fearing there was a weapon inside the port-a-pottie. Hummel declined to charge the man, saying "fear-based policing prevailed over common-sense and humane policing."

In the case of the protesters, Hummel's letter alleges that only members of one group of protesters were targeted for arrest and/or surveillance, while those not known to be associated with the group were not cited or arrested.

"A 62-page detailed report for what amounts to allegations of trespassing, is shockingly long," Hummel wrote in his July 16 note to Krantz, obtained by OPB. "I venture to say it's the longest trespassing report in the history of the City of Bend. I would love to see domestic violence allegations receive the level of investigation and documentation that these trespassing allegations received."

The six-page letter goes on to describe Hummel's justification for declining to charge each of the individuals targeted by Bend Police. At the end of the letter, Hummel invites Krantz to work "with your critics to make the Bend Police Department the most ethical, just, and effective police department in the country," and invites Krantz to work with him to make that happen.

Transparency and accountability are buzzwords that most of us have heard a time or two over the past several years. They are words to live by, to be sure. In a very public way, Hummel is holding the local police department to a higher standard. The local DA, elected by the public to uphold the law and to evaluate not just the actions of alleged criminals but also the people who arrest them, is, in this instance, defining the rules of engagement around the increased activism we are seeing in this community. That's appropriate, but to be fair to Krantz, the letter is hyperbolic and tinged with shades of grandstanding.

Our current DA has been outspoken about being a criminal justice reformer, committed to reducing recidivism among those in the criminal justice system. Local law enforcement will need to conform to the DA's style of management. Hopefully Krantz and Hummel can have a less-public conversation about policing so activists don't needlessly get arrested, and we can all feel confident were making progress on the kind of reforms our community wishes to see. We expect to see more activists pushing back against actions they disagree with. That's their role. Our police chief is new to this community and is, with incidents like this, being taught the role of his department. Our hope for the future is that the teaching is done in a more collegial manner.

These times we find ourselves in are hot across all levels of the political spectrum, to be sure, and with that comes a feeling of instability. We'd prefer to see less instability, however, from the two entities tasked with managing criminal—or not-so-criminal—activity in the community. The community deserves better policy and better communication from both sides.

Related Emerson’s Cleared. Now What?: The City’s after-action report from the closing of a camp on Emerson Avenue could guide future closures on City-owned right of ways

Emerson’s Cleared. Now What?
The City’s after-action report from the closing of a camp on Emerson Avenue could guide future closures on City-owned right of ways
By Jack Harvel
Local News