Dawn Wall is a Delight for Doc Lovers

Anyone who loves documentary films knows this: the subject doesn't really matter. The heart of a great documentary transcends its subject, and "The Dawn Wall" is no exception. BendFilm is bringing this film back to The Tower Theatre on Jan. 11, and it's free for BendFilm members. 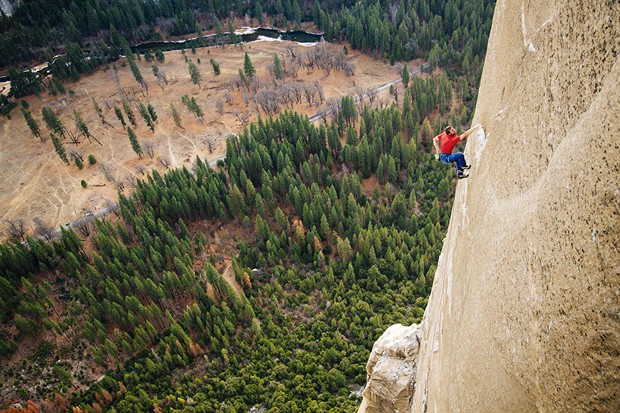 "The Dawn Wall" tells the story of Tommy Caldwell and his quest to climb the notoriously difficult part of El Capitan in Yosemite National Park, called the Dawn Wall. He's joined in this massive feat by Kevin Jorgeson, a climber who practices "bouldering" and doesn't know what larger climbs entail in terms of the gear and rigging. For six years, the two men train and practice along the various wall routes to determine the best path, Caldwell teaching Jorgeson the ins and outs of rock climbing along the way.

The story gives you a thorough, if quick, understanding of Caldwell from his days of growing up, to being a young kid winning international climbing competitions, to turning pro and getting kidnapped while climbing in Kyrgyzstan in 2000 by local rebels. In fact, so many crazy things happen in the first 20 minutes of this film, you begin to wonder just what else could really match up to the drama. And yet that's exactly what makes this film so great: the examination of why we do the things we do, what drives us and how we deal with failure, transcend pain and continue forward.

"My preconceived limits were totally off base. That we are capable of so much more than we could ever really imagine," Caldwell says at one point in the movie in reference to being kidnapped. From that you understand how time and perseverance are tools for this man to continue on with his life, regardless of what comes at him.

You don't need to know or understand or even particularly like rock climbing to appreciate this film. The filmmakers do a great job of using an interview with rock climbing legend and writer John Long to help explain and educate viewers. His voice helps you understand just how difficult this is and how crazy it seems to everyone, even those deep in the climbing world.

You also get to see the progression of Jorgeson as a climber, and how the media attention to the climb affected both. You see a whole world through the lens of traversing this difficult terrain. It's not just an enormous feat as a climber, but one for a filmmaker, too, to transcend the limits of the story of climbing to tell the story of life itself.

The film opens with a writer from The New York Times asking Caldwell and Jorgeson this question: "What is the point of all this?" It's the question that drives this movie. It comes again and again from news reporters commenting while they're on the wall, to Ellen Degeneres who interviews them after the climb is complete. And it seems like an essential question about things that go beyond climbing; it's the question that comes at you at every corner of life, whether you are on a rock wall or not. And it's why this film will leave you cheering, the way all great sports films do, regardless if it's your team doing the winning... or even if you don't particularly like the sport.