On May 8, teachers and students across Oregon are coming together to advocate for school funding

Some school districts in Oregon are canceling school on May 8 to coincide with the Oregon Education Association's "Day of Action"—a demonstration aimed at what school leaders call the state's decades-long failure to provide funding for kindergarten through high school education. 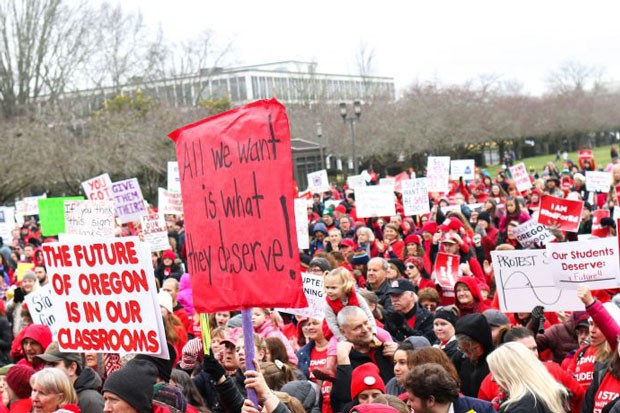 Bend-La Pine Schools are staying open, according to the district, which said its teachers and staff have opted to keep the schools open to "ensure students can receive the safe learning environments they deserve and to limit financial impacts to our families and local businesses."

Instead of teacher "walkouts," the district will host after-school rallies where families are invited to join district staff and teachers for music, inspiration and camaraderie in support of education.

The Bend March for Students begins at 2:45pm. People can gather at either Troy Field or across Bond Street on the Education Center lawn. The rally is scheduled to start at 3:15, and at 3:45pm the march is set to begin through downtown. The event should end about 4:30, according to Bend-La Pine Schools.

In La Pine, families can gather at the La Pine Elementary School playground at 2:45pm. The La Pine rally and march have the same time schedule as the Bend one.

Redmond School District will use its school improvement day to let students out one hour early to engage in marches around their buildings, according to Gina Blanchette of the district.

Other districts will close on May 8, and some will add a school day to the end of the year. Portland Public Schools, North Clackamas, Gladstone-Barlow Schools and Beaverton Schools—among others—will all close for the day.

According to a story on Oregonlive, some district leaders said they can't round up enough substitute teachers to safely operate. District officials in Beaverton said closing the schools for the day will help mitigate an anticipated $35 million shortfall in next year's budget that could mean the loss of up to 200 teachers. Beaverton school officials said in a release that the teacher's union agreed to reduce this year's academic calendar by one day and go unpaid on May 8.

A Call for More Funding

Bend-La Pine Schools said in its letter to families that surveys across the state show Oregonians want smaller class sizes, increased health and safety services, more learning time and a well-rounded education to ensure graduates are prepared for the future.

According to the August 2018 Oregon Quality Education Model, Oregon public schools are underfunded by nearly $2 billion for the 2019-2021 biennium.

BLPS also said that with appropriate levels of funding, it could go past the current service levels and focus on investments including smaller class sizes, increased health and safety services, more learning time and a more well-rounded education.

This month, the Oregon Legislature started working on legislation that could add $2 billion in additional revenue for schools from a new commercial activity tax, which would take a portion of a business' total revenue. The money would go into a "Student Success Fund," which would fund additional education programs and other school initiatives including smaller class sizes and more counseling services, according to information from the Joint Committee on Student Success.

"Oregon schools are in crisis," John Larson, high school English teacher and president of the Oregon Education Association, wrote on the OEA website. "This proposal to invest $2 billion in education directly addresses the issues facing our schools today. The Student Success Act prioritizes resources to go directly to the classroom, reducing class sizes, restoring critical programs like career-technical education and art and music, and providing for students' mental and behavioral health needs. If the Legislature is able to fully fund their Student Success Act, we could make game-changing investments in all students, including students of color, low-income students, and students from other historically disadvantaged backgrounds."

The bill was approved in committee Monday night, after key legislators reached a last-minute deal with the Oregon Business & Industry, which signaled it wouldn't pursue or fund an effort to refer the tax and school funding question to voters, according to a story on Oregonlive.

"We feel comfortable with the direction that this conversation is going and we will be neutral on the tax proposal," OBI President Sandra McDonough said in the Oregonlive story.

Since the bill would raise taxes, it would take a supermajority vote of three-fifths of lawmakers in the House and Senate to pass.

Bend-La Pine Schools encourages people to wear red on May 8 in support of students and staff.