The cold snap that has hit most of the Pacific Northwest is causing local groups to open up more spaces for people to be indoors. In addition to the warming shelters already in operation in every town in Central Oregon, at least two more spaces are open this week to accommodate those who need somewhere to go.

Shepherd's House Ministries announced Monday that it would open its soon-to-be-permanent shelter space at 1350 S. Hwy 97 in Redmond as a temporary daytime warming shelter at least through Dec. 30. The space is in a building that Shepherd's House recently acquired in order to build more shelter capacity in the town. That building will undergo renovations in the coming months in order to be a permanent location for shelter services. 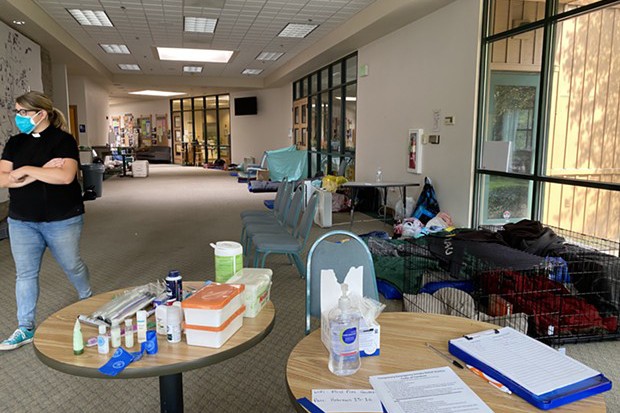 "Our commitment to caring for our most vulnerable neighbors means going beyond overnight sheltering when extreme weather conditions demand it," said Shepherd's House's Redmond City Director Andrew Hoeksema. "As many of us in Central Oregon enjoy the holiday season, our unhoused neighbors are at significant risk in these very cold days. We will partner with Redmond community members to welcome them inside, offering simple food and safety as a way to care those who need it most." The Redmond location is open from 8am to 5pm, and Shepherd's House will use its van to transport people from its daytime shelter to its overnight warming shelter—currently housed at the Mountain View Fellowship Church. Donations of prepared food, snacks and bottled water are welcome and can be arranged at shepherdshouseministries.org.

In Bend, First Presbyterian Church also announced it would open a daytime warming shelter at its church on 9th Street at least through Dec. 30. That shelter is also open from 8am to 5pm. First Presbyterian is also inviting people to drop off winter gear, including gloves, hats, socks and hand warmers at the church through Thursday at 6pm.

In addition to the daytime winter warming shelters, the towns of Central Oregon—including Bend, Redmond, Sisters, La Pine, Madras, Warm Springs and Prineville—each have at least one winter warming and/or overnight shelter available for those who need a warm place to sleep. Some of the locations—such as some of those in Redmond and Sisters—move around to various locations throughout the winter. The Central Oregon Homeless Leadership Coalition maintains a list of the shelter locations and their hours and offerings at its website: cohomeless.org/winter-shelter-listing-2/.