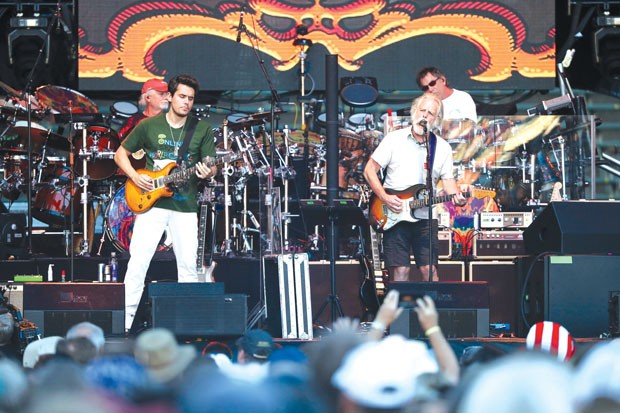 According to The Register-Guard, Autzen Stadium hadn't hosted a concert in 20 years before this past Saturday night—but when the band is the newest iteration of the Grateful Dead, it's worth making an exception. In fact, exceptional is perhaps one of the only ways to describe the Dead & Company concert at the University of Oregon's venerable football stadium, which took place June 30.

The last time the Grateful Dead played Autzen was in 1994, when its beloved lead singer, Jerry Garcia, was still alive and playing his own brand of four-fingered guitar. The band first played Autzen some 40 years ago—memories of which were shared by not a few grey-haired, tie-dyed attendees of Saturday's show. Indeed, it was a reunion for members of the original band, but also for fans—which Eugene, Ore. has in spades. (Of course, many Central Oregonians made the trip, too, being the closest show to our neck of the woods.) A concert, held in the iconic stadium boasting the University of Oregon "O" over the scene, certainly combined some of Oregonians' favorite things. Surprisingly though, the show wasn't sold out. I bought a ticket last minute, without needing to raise my pointer finger and beg for a "miracle" outside the doors.

The Grateful Dead without Garcia, who died in 1995, has been, well... a series of iterations and re-iterations. Over the past 20+ years, you might have seen band members as the Other Ones, Furthur or Phil Lesh & Friends, containing one or more of the original members. The Fare Thee Well tour of 2015 included bassist Phil Lesh, guitarist and vocalist Bob Weir, percussionists Mickey Hart and Bill Kreutzmann—along with Phish's Trey Anastasio on guitar and vocals, Bruce Hornsby on piano and vocals and Jeff Chimenti on keys and vocals. Celebrating the 50th anniversary of the Grateful Dead, that limited tour was touted as the final time the members would play together.

Thus far, that's been the case, since Lesh is not on the bill during the current tour. On bass (and drums) this time around is Otiel Burbridge, a jazz- and classically trained musician who played with the Allman Brothers Band from 1997 to 2014. Chimenti is back, too. Singing a majority of the tunes, Weir definitely takes the lead, rocking out favorites including "One More Saturday Night" (it was Saturday, after all), "Dark Star," and "Morning Dew" at the Eugene show.

And then there's the addition of John Mayer, known for his sugary-sweet, mainstream solo music, who's been "playing Garcia" in this band since Weir and Mayer met in 2015. The two shared vocals on a host of crowd faves during the Eugene show, including "St. Stephen," "Lovelight," and the encore, "Brokedown Palace." Here is also the moment in which I must mention the stellar "Drums/Space" number close to the end of the show, courtesy of Kreutzmann and Hart. Just wow.

"And I think of Jerry Garcia and his intentions with every song we play. I'm only there so that on my best of nights, you might get to him." —John Mayer tweet this

Many were dubious about the addition of Mayer—and my concert companions and I were some of them—but not for long. Mayer's musicianship in this band is decidedly Southern-blues influenced, adding another dimension to the riffs so many have long known and loved. His sweet voice grows on you, inside the Dead's beloved lyrics.

It's gotta be a tough gig for Mayer in some respects, since Dead fans tend to set the bar high. No one can compare to Garcia, they say. Many have railed at the choice of Mayer, but my own take was nothing but pleasant surprise at how much I enjoyed him in this band.

When aiming to fill the slot Garcia once held, is it better to try to imitate? Perhaps not—and Mayer does do his own thing. The younger musician—who stood out on the Eugene stage in stark white jeans— is admittedly a relatively new Dead fan, and yet seems to fully understand what fans are looking for.

As Mayer wrote on his Instagram feed in May, just before the current tour kicked off: "And I think of Jerry Garcia and his intentions with every song we play. I'm only there so that on my best of nights, you might get to him."

Like Garcia before him, Mayer's vocals and guitar did offer fans the ability to be transported.

As he wrote, "I'm like anyone else who was ever moved by this music, who was discovered by it, and not the other way around."

Dead & Company
On tour through Aug. 26
Tickets at deadandcompany.com