If you visit the Killer Cocktails website about now, one of the first photos you'll find will be of hosts Shawndreya "Dreya" Garliepp and Jackie DeGear, each of their hands duct-taped around 40-ounce bottles of beer. DeGear's mouth is in a straight frown of resignation while Garliepp chugs down one of her Busch Classics. 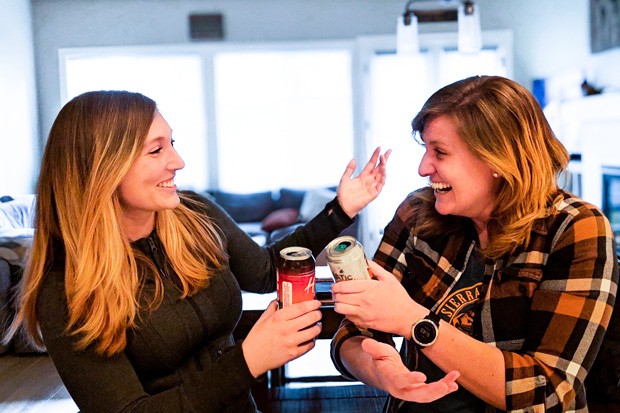 If you went to college during a certain period of time, you might recognize this as the Edward 40 Hands "game," whose object is to simply finish 80 ounces of beer (or malt liquor, god help us) without hitting the bathroom. While this isn't an exact representation of what the hosts of the Killer Cocktails podcast do each week, it might give you a sense of how much fun these two have in doing what they do.

Launched last fall by the two Bend women, the Killer Cocktails podcast involves the hosts mixing up new cocktails each week, along with each of them introducing a true crime story to go along with their drinks. For example, they paired the Honey Bee Cocktail with a story about Vanessa "Honey" Malone, murdered when she was just 18. They also paired the Moscow Mule with the story of Ukrainian killer Andrei Chikatilo, also known as the Butcher of Rostov. The Edward 40 Hands game, in case you were wondering, went along with a podcast that featured Edward Wayne Edwards, a former FBI's Most Wanted killer.

That episode also marked the pair's 40th episode—a big milestone for a couple of co-workers who started their podcast after joking around about it extensively at the office.

"We both have a love for true crime—things that are ghastly and gross and you don't really talk about with other people normally," DeGear said. "We both realized that we were both listening to true crime podcasts because we would talk about them, and everyone else around us didn't want to hear about it."

"Jackie and I just started bantering in the office, and people around us were like, 'Could you stop it, these details are too much,'" Garliepp explained.

With true crime podcasts such as Serial and My Favorite Murder being household names, the two knew they had to do something a little different. Hence, the introduction of one of their other favorite things: Drinking.

"There's a million true crime podcasts—and another interest that we both had was cocktails and learning different cocktails," DeGear said. "This is a beer town—all your favorite beers and different types of beers, but there's all sorts of old cocktails that you don't hear about anymore. So that's been really fun, learning recipes and discovering our favorite drinks we didn't know we liked."

Learning to make old timey cocktails has introduced another element of hilarity: The spills, missteps and general foolishness that comes from not being mixologists who know their way around a bar. Knowing fans might find this entertaining, DeGear and Garliepp started making videos for their Instagram feed, showing them attempting to make the drinks featured in the podcast.

And while making cocktails and talking about them—and crime—is the main focus of the podcast, the two are also looking ahead to their next round of college games.

"We like to space out the ridiculous, college-y ones. I think the next one—which I feel like we need a good amount of space from—is Wizard Staffs," DeGear said, as Garliepp groaned. That game, for those not in the know (like me), involves drinking canned beer and stacking and taping together the cans as you finish them, attempting to make a staff as tall as the person drinking them.

As DeGear put it, "The wiser the wizard, the longer the wand."

Check out the Killer Cocktails Podcast full interview, in podcast form! Since this was a story about podcasters, we decided to make a podcast out of the interview.