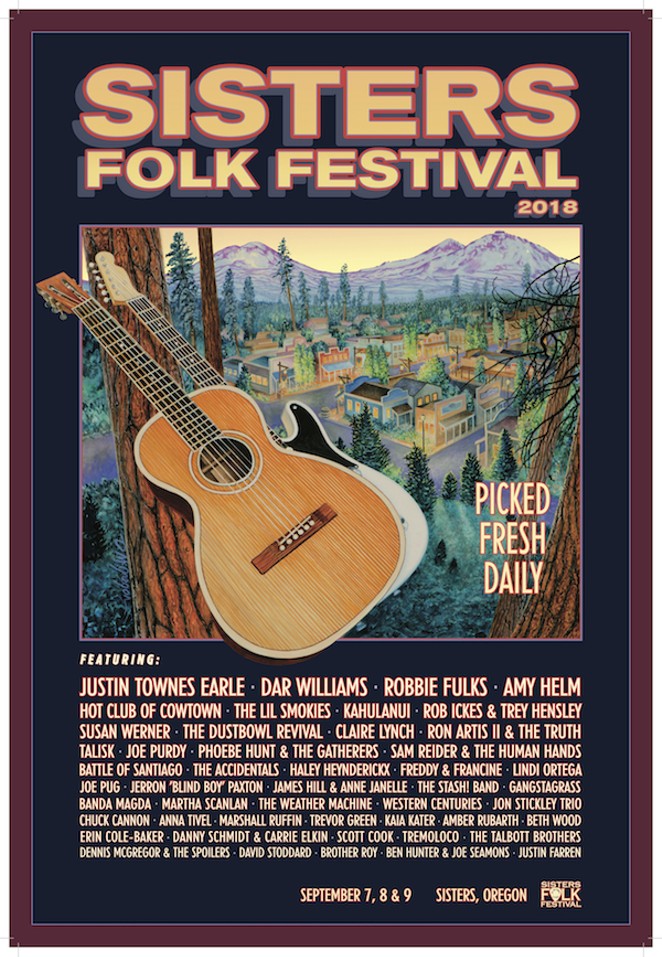 It’s been 18 years since Dennis McGregor painted his first Sisters Folk Festival poster. Over the years, the annual image has become a moment captured in time, honoring a town and its dedication to the arts. This year is no different.

“In the beginning people said, why don’t you just do an image of an instrument and do a different instrument each year. But then I decided I wanted to have a human element in there,” reflects McGregor. After the third year, he began what he called a “Local Treasures” series, featuring local musicians, with their instruments, as a shout-out to the growing musical community in Sisters.

From there, McGregor kept follow his whims, and, feeling silly in 2014, led to a series featuring animals, a buck playing harmonica, sweet song birds singing harmonies into an old microphone and a riff on the classic dogs playing poker image, with pups having a jam session around a campfire.

Last year, McGregor wasn’t feeling silly, and instead created an image of the Statue of Liberty, one hand in a raised fist, the other playing a little parlor guitar—the style of guitar that cowboys in the West were playing the year the Statue was gifted to the United States. It’s an image that speaks to the history of folk music and its role in political resistance throughout history.

After last year’s cancellation of the festival due to the toxic smoke covering the area, McGregor returned this year with a nod to the sweet town that becomes one giant stage every fall. With a high-angle illustration of Sisters and a guitar in the foreground, McGregor was inspired by the traditional art on fruit crates and how that honored the town’s agricultural roots. “I am grateful for the folk festival to allow me to continue to do it year after year. I know the festival well and take it seriously. I appreciate the confidence they have in me,” says McGregor.

When not creating iconic images for the festival, you can find McGregor painting in his studio, promoting his recent book, “You Stole My Name” (featured on the Source’s cover last November) which is available locally at Newport Market, Roundabout Books and Dudley’s Bookshop Cafe.

In the next few months, McGregor will paint three of the images from the book, including ChickenHawk, Bull Trout and Mule Deer, for display in the Old Mill, across from REI, between the building walkways. He’s also currently working on a follow-up book about plants with animal names.